MLB’s New CBA Is No Help to Small-Market Clubs 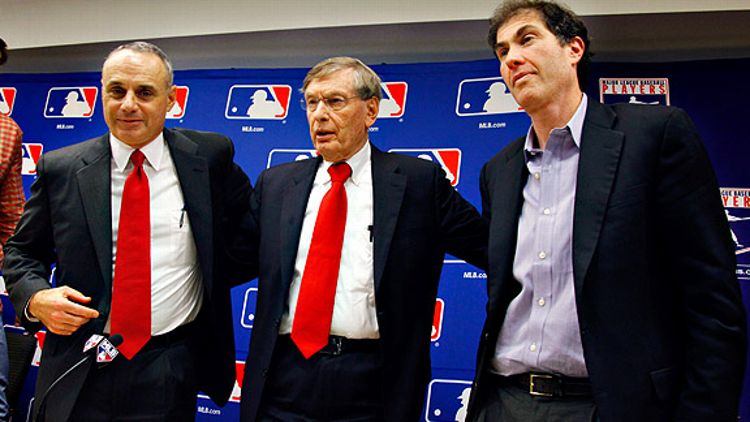 Hey, you know that one sports league that keeps stabbing itself in the eye because the parties involved can’t look past their own self-interest? Apparently Major League Baseball got jealous.

The terms of MLB’s new collective bargaining agreement came out earlier Tuesday. The biggest CBA change places severe restrictions on teams’ ability to spend premium dollars on the amateur draft and international signings. So while the deal’s cheerleaders trumpet the 21 years of uninterrupted labor peace that we’ll have by the end of the five-year deal, baseball risks harming the game in two major ways:

• Smart teams in non-elite markets could fall further behind.

For years, the commissioner’s office has fought to institute hard slotting in the amateur draft — having teams spend no more than X for the first pick, Y for the second, and so on. Most teams happily ignored those recommendations, since no real repercussions awaited those who defied the league.

Those that stood to benefit the most from draft aggression were lower-revenue clubs. The Pittsburgh Pirates could never hope to compete on the open free-agent market for Albert Pujols’ services, with the asking price likely topping $200 million. But the Bucs could land multiple potential stars in the draft by going over slot to reel in the best prospects. Nine years ago, the then-cheapskate Pirates passed on top prospect B.J. Upton in favor of thriftier choice Bryan Bullington, proudly proclaiming Bullington’s future as a potential no. 3 starter in the big leagues — as if getting a mid-rotation starter with the no. 1 overall pick was a good thing. That all changed in later years, with the Pirates spending a team-record $11.9 million on 2010 draft picks, then setting a major league record by dropping $17 million this year, including a combined $13 million on way-over-slot picks Gerrit Cole and Josh Bell. For the first time since Barry Bonds bolted two decades ago, you could start to feel good about the Pirates’ future.

If you’re a Pirates fan, you should feel a lot worse today. The new CBA outlines penalties for going over slot. They are as follows:

• Any team that goes over total recommended slot spending in any one year’s draft by up to 5 percent must pay a 75 percent tax on the overage.

• Any team that goes over total recommended slot spending in any one year’s draft by 5 to 10 percent must pay a 75 percent tax on the overage and lose its first-round pick in the following year’s draft.

• Any team that goes over total recommended slot spending in any one year’s draft by 10 to 15 percent must pay a 100 percent tax on the overage and lose its first- and second-round picks in the following year’s draft.

• Any team that goes over total recommended slot spending in any one year’s draft by more than 15 percent must pay a 100 percent tax on the overage and lose its first-round picks in the next two drafts.

• Any team that goes over total recommended slot spending in any one year’s draft by more than 20 percent must absorb the contracts of A.J. Burnett, John Lackey, and Barry Zito.

Even if that last one isn’t true, the rest of these penalties will make it much tougher for small-revenue teams like the Pirates to do what everyone always tells them to do to keep up with the big boys: scout, draft, and develop superior talent. This new rule doesn’t just affect one or two teams either. As Baseball America’s Jim Callis notes, 20 teams outspent total slot recommendations by 16 percent or more this year, meaning two-thirds of MLB teams would have paid 100 percent overage penalties and forfeited two future first-round picks. Throw in a new provision that prevents teams from offering major league contracts to draftees, and these changes figure to dramatically alter the way teams do business.

But wait, there’s more. Spending on international signings is now subject to the same harsh penalties. Effective immediately, every team will have $2.9 million to spend in international bonus money, the first step toward what many in the game feel will eventually result in an international draft, which like the amateur draft will transfer more money from the players to the owners. Let’s put the $2.9 million figure in context. Per ESPN’s Buster Olney, the Rangers spent $17.6 million on international signings in the past year alone. No team does a better job devoting resources — both financial and intellectual — to international scouting and player development than the Rangers. It’s a key advantage, built through years of sweat and brainpower that they hoped to build on as they defend their two straight pennants, while competing against the far richer Yankees and Red Sox. The bulk of that advantage has now been wiped out.

Those effects might seem unfair, but both sides know what they’re getting. For team owners, it’s a chance to spend less for young talent, and thus put more money into their pockets. The few teams that have traditionally avoided spending over slot in the draft will get an added benefit, with rivals becoming more reluctant to outspend them. The Braves, for instance, have long stuck to MLB’s slot recommendations. They haven’t suffered any major consequences in loss of talent, because more often than not, they simply outscout the rest of baseball. It’s no coincidence that Braves president and former GM John Schuerholz was one of the driving forces in hammering out the new draft arrangement. It’s certainly possible that other teams could simply get smarter in their talent acquisition and find good players without spending big bucks, the same way shrewd teams do on the trade and free-agent markets. But this was still a viable lower-cost option for cellar-dwelling teams to catch up to the rest of the league that’s now been severely curtailed.

The real blame here lies with the Major League Baseball Players Association. After today’s press conference, MLB Network’s Tom Verducci asked union head Michael Weiner to name his biggest victories from the CBA negotiations. Weiner noted that more players will now become eligible for arbitration sooner, with the Super 2 threshold rising to 22 percent of third-year players who will now come up for arbitration (it was previously 17 percent). Weiner also cited the change in the draft-pick-compensation structure, which will end the practice of stripping high draft picks from teams that sign free agents, except in the case of elite or near-elite players.

As in any negotiation, you have to give something to get something. But what the union gave affects exactly zero percent of its current members, since amateur players can’t join the MLBPA. Somehow the union was able to slash the potential earning power of a whole class of players who lack the protection afforded to all those above them. I’m not a lawyer, but I’m pretty sure in legal terms that qualifies as a whole mess of wrong. Here’s hoping some enterprising, young attorney will take up the fight for the many, many high school, college, and international athletes who just got screwed out of a hell of a lot of money.

Of course, those athletes have another alternative: Punt baseball, and go play another sport. Unlike in football or basketball, draftees and international signings in baseball stood to make guaranteed money years before they ever stepped on a major league field. So if an MLB team wanted to persuade a two-sport star to forsake all others in favor of a guaranteed contract and a potential path to the big leagues, that team simply needed to dig into its pockets and make it happen. With that money now restricted, we could see 18-year-old multi-sport stars decide that the long road to the big leagues and the long odds of making it aren’t worth giving up other opportunities. The next Grady Sizemore might decide that playing quarterback and being a big man on campus for a powerhouse college is a more attractive path than riding buses all night for Beloit Snappers road trips. At a time when teams are fretting about the overall talent pool and the lack of star players, there’s a good chance baseball just made things considerably worse.

The new CBA isn’t all bad. An earlier signing deadline for draft picks could get top prospects into the system and on their way to the majors quicker. Realignment will finally result in six divisions with five teams each. The minimum major league salary will rise substantially in the next few years, hitting $500,000 by 2014. Though not everyone will like it, the move toward blood-testing for HGH is one both sides seemed happy to codify. Perhaps best of all, baseball will finally (start to) get its head out of the sand on instant replay, expanding it to include fair/foul plays and plays in which the ball has possibly been trapped by the fielder. It’s not a full-on robot-umpire takeover, but it’s a good start.

The new CBA does offer some allowances for poorer teams, too. A “competitive balance lottery” kicks in that awards extra draft picks to the lowest-revenue teams in the smallest markets, with the odds of winning one of the six bonus picks after the first round weighted based on lowest winning percentage, and six more bonus picks awarded to leftover teams after the second round. Baseball will also tweak its revenue-sharing system, with the new CBA preventing clubs in the 15 largest markets from receiving revenue-sharing funds by 2016. Most visibly, baseball gets one extra wild-card team per league starting in either 2012 or 2013, thus offering a bit more hope and faith to lesser teams hoping to play into October.

But the new deal, taken as a whole, does more harm than good. The offer to lower-revenue teams likely won’t make up for the neutering of draft and international budgets. It won’t come close to addressing the gigantic gap between richer and poorer teams’ local TV deals, one that’s growing rapidly every year. And if fewer available dollars push star athletes away from baseball, that’s an inexcusable loss that could have been avoided, if not for the usual bouts of greed.

Baseball can look forward to a full season of games, which is more than the NBA can say right now. Just don’t go calling this new agreement a big win for the sport. If you’re a baseball fan, you lost a little today. And if you’re a fan of a team that’s not the Yankees or Red Sox, you lost a lot more.