Tim Farrell/The Star-Ledger via US Presswire 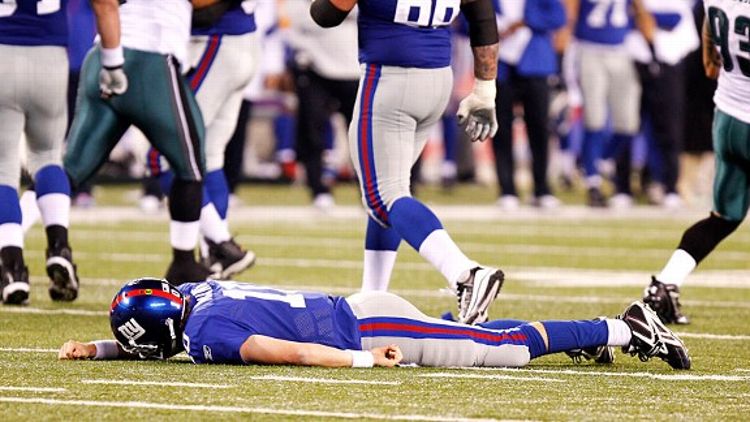 Three weeks ago, Matthew Berry had a bye. He’s back, but in order to balance the scoring, each fantasy expert has to take a week off. Mack was off last week, and this is Eisenberg’s bye week. In his absence, point totals will range from 4 to 1 in each category. Here’s the remaining bye week schedule:

In Week 12, the St. Louis Rams are a good sleeper pick to start at the “arrested fans” position. The memory of the World Series has worn off, and they’re about to lose to the Cardinals to move to 2-9 on the year. Expect at least 40 fans to earn a lock up for assault, public intoxication, or even simple loitering.

The great empire, everyone would be of it,
One will come to obtain it over the others:
But his realm and state will be of short duration,
Two years will he be able to maintain himself on the sea.

This is clearly prophesying that despite Eric Mack’s dominance during the regular season (“obtain it over the others”), he’ll fall in the playoffs to an unlikely contender. Perhaps “two years” means two weeks, and “the sea” means playoffs, which means he’ll lose in week three — the championship.

Interlude 3: False Memory About Hanging Out with a Fantasy Expert That is Actually a Scene from The Royal Tenenbaums

After Mike Harmon paints his face and drives a car into my mother’s second wedding (to an accountant), I chase him around the house and eventually tackle him over a garden wall separating our backyard from a neighbor’s. Exhausted, we lay on the ground. “Did I hit the dog?” he asks. “Yeah,” I answer.” “Is he dead?” “Yeah.” “I need help,” Harmon says. I stare up at the sky. “So do I.”

At long last, Mack’s long winning streak (five straight victories and one bye week) has been broken. A statement week from Matthew Berry puts him at the top. Too late for the regular season, maybe, but all the sudden he’s looking like a scary playoff opponent.

A sudden surge from Fabiano reduces Mack’s lead to just 3.5 points! With only two weeks left in the regular season, the crown is still up for grabs.

*Has yet to sit out his bye week.

See you next week, when Berry will try to climb out of the cellar and Fabiano continues his late push for the title.

Previously by Shane Ryan:
Maui Invitational, Day 1: A Triumph of Discipline
About Last Night: Get Your Gronk On
Inspired by the Greatest Upset Ever: A Maui Invitational Preview
College Football Recap: A Frenetic Week 12

NBA Lockout: The NBA's Nuclear Winter -- Where Do We Go From Here?