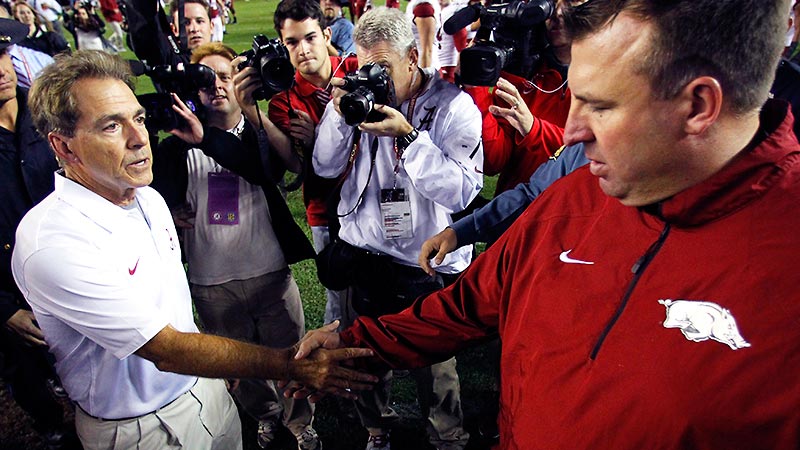 The tabling of the 10-second rule proposal hasn’t killed the safety debate on pace of play in college football, but as long as hurry-up, no-huddle coaches are winning games in traditionally muscle-bound conferences, there’s going to be grousing. Here to help! We called up CFBMatrix proprietor and public data enthusiast Dave Bartoo to discuss his report on college football injury rates (a long but interesting data dive which you should read!), how his exploration into pace-of-play stats reversed what he considered common sense on the matter, and what the football player of the future might look like.

So the pace of play–versus–injury rates argument isn’t the first conventional wisdom pillar of college football you’ve poked. How did you get into this kind of examination in the first place?

How I got into it is basically how I got into everything else in my career, which is by chance, but also by exploration. My whole career has been based on taking complex questions and making simple answers, and one of the things that I’ve always loved is college football. What started as spreadsheets and math has turned into a fun way, a different way, of looking at college football. I own a merger-and-acquisition firm. And I started that, again, off of spreadsheets. Finding data, and seeing where the greatest propensity was for certain companies to be merged. This college football thing, it was nothing but a spreadsheet and a laptop that I had in my backpack when I’d go bow-hunting elk. And my buddies were finally like, “Dude, we’re tired of you talking about this over the years. Either shut up about it or put it online.” A couple weeks later one of them made me a website. It’s been a cool ride.

So your spreadsheet enthusiasm gave you the tools to go after this?

Click here for all of our interviews with fascinating people from the worlds of sports and pop culture.
I can’t explain, but I’m always looking for something new, a different way of approaching things. My wife will tell you I’m the master of useless information. Well, every once in a while, some of that useless information is fun. And it’s useful. To make a smarter fan. To make college football more interesting.

How do you strike a balance between mining all those interesting tidbits and just taking all the fun out of it for yourself?

You know, I don’t try to quantify it too hard. A lot of people criticize what I do because it’s not perfect. It’s not 100 percent accurate. And god forbid we ever get to that point, where the numbers actually told us what really is going to happen, every single time. I’m happy to be 80 percent right or so throughout a season, and I think that’s one of the great things about college football. That upset where you don’t know what happened, and you can’t quantify it. What I’m doing, it’s not with the goal of being perfect.

That’s something I think we all have to keep hold of as consumers, especially as all these industries continue to expand around the game, from prep coverage, to recruiting, all the way to draft analysis: being comfortable with a certain level of “This is unknowable.”

Yes. The best things in life are surprises. Knowing things is great, because it makes you feel comfortable about the future, but it doesn’t make it exciting.

And college football has this dramatic advantage that can never be broken. There are so many ways in which it can’t be broken down, and that keeps us from turning into actuaries about it. It’s so much fun to dive into things like your report, but as a fan, I kind of like that at some point, we hit a wall, and there are too many moving parts in space to track.

That’s one of the reasons I enjoy it more than the NFL. With the NFL, it’s a lot more homogenous. I think we’ve got to be careful about trying to become something that maybe we don’t want to be, and that’s the NFL. “We need a playoff!” OK, the NFL has a playoff. “We need more football games!” Ooookay, the NFL wants more football games. The corporate sponsors, the money: Everything seems to be driving, because the NFL model has financially been so successful, down a path too much like another sport, when being different is really cool.

Getting into your report, I don’t want to make you rehash the entire thing because, theoretically, folks have read it by now. But tell me what surprised you the most, as you ran the numbers, about where you were taken?

This was last summer, when [Nick] Saban and later [Bret] Bielema started talking about pace of play and injuries. And obviously I don’t have any access to private files from schools, or anything like that, but we have all this public information. And there’s plenty of stat-geek people out there. There’s so much public information that you can find. There are so many places with catastrophic injury lists, season-ending injuries, starts lost to injury. And statistics-wise, there are spreadsheets out there that will tell you the exact minute of a game that every play was run, and what kind of play it was, so you can take all of this information and try to make something of it.

The first thing I did is just simply look at who’s playing fast, who’s playing slow, and what is the rate loss on injuries. I looked at 2012, and I looked at the big five conferences, and I was amazed to find that when you look at the number of plays run per game, the thing that stood out the most, right away, is the conference that played the slowest, slowest pace of play per game in 2012, was the SEC. The fastest was the Big 12. And when you look at the number of starts lost to injury in the SEC, it had the highest rate, and the Big 12 had the lowest.

Then I pulled up a couple more numbers. The heaviest conference, the biggest in 2012? The SEC. The lightest of the five? The Big 12. And it just simply went the opposite direction from where I expected, because when [coaches] started talking about this, my assumption was: They have a lot of information, they have some data, they wouldn’t say this without something backing it up. These are very smart football guys. I thought, “I need to either find something that correlates with what they’re saying, or just doesn’t agree.” I was really shocked to find the opposite. But what also makes sense, too, is the bigger you are, the more you’re going to get hurt.

So from there, it was 2011, 2010, 2009. It kept coming up the same thing. The injury rates, as a whole, over those four years: slowest conference in pace of play, SEC. Highest rate of injury starts lost per play, SEC. For 2013, I looked at catastrophic injuries, season-ending injuries. Again, where were these coming from? They were coming, percentage-wise, from the SEC. So, really, the conclusion is, the bigger the guys, the more you’re going to get hurt. 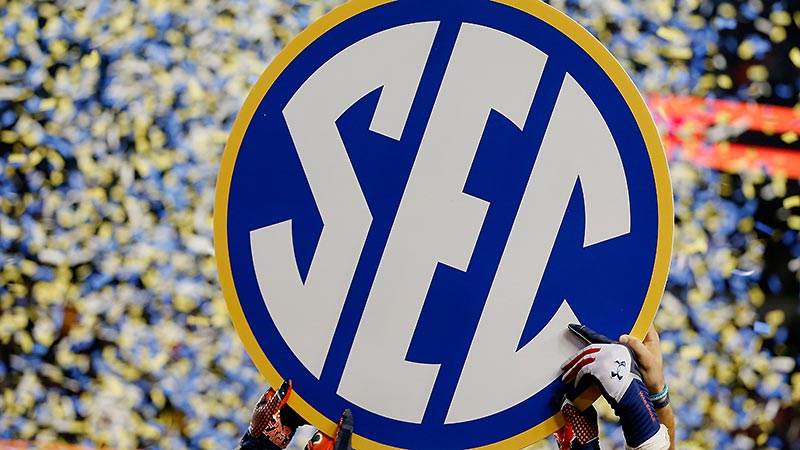 One turn this discussion took, when Bielema was really making his push, was that these coaches are arguing for less football, seemingly by accident. Which of course is precisely the opposite direction from where the game is headed.

What was it, 20 years ago, you could win 11 games and win the national title? And now it’s going to be 15. The average pace of play last year was 76 snaps [per game]. You multiply that times four, you’re looking at 250-280 extra snaps per season.

And of course, all these concerns go out the window inside two minutes no matter whom you’re talking to. Everyone’s allegedly concerned with player safety … until the clock gets too close to zero and the score’s too close.

Are there any other factors you think the current debate might be overlooking?

I think it just comes down to the size and the speed. It’s a violent game. If you want to reduce injuries, and make it safer for the players, I think what it comes down to is [fewer games], or putting caps on weight and speed. Which, neither one is going to happen. College football today versus college football five years from now, largely, is going to be completely the same.

Weight caps for positions could at least end humorously, with guys being force-fed BBs during the week like championship fish at a weigh-in. But you don’t think we’ll see an overall trend toward a certain type of football player, toward this lighter, faster player?

But not for safety reasons, for strategic reasons?

You’re always going to have big, fast guys. Now, what’ll be interesting to see is the adaptations toward the hurry-up. In 2011, there were almost 118,000 plays run and defensed by the big five conference teams. There were just over 1,500 starts lost to injury. The very next year, the number of plays ran and defensed was almost exactly the same. But there were 350 fewer starts lost to injury. If that keeps going forward, what we might see is a plateau of how fast the game is being run, and that people are adapting to it physiologically, training-wise, such that injury rates are coming down, because maybe the guys are slimmer and more fit. Maybe one good thing about this pace of play is that the physiological change in the college football player is less mass, even though it might be the same guys. A little more increased speed, but a healthier system overall.

What about on the administrative end? Do you see a future that’s that much more numbers-driven than where we are now?

Maybe. But one of the things that drives me nuts is when people say “Let’s Moneyball football. I’m gonna Moneyball football.” Moneyball is so simple because it’s one-on-one situations. They can measure the velocity of the ball, the velocity of the bat, the location of everything. It’s one on one. In football, when that ball snaps, you have 22 guys moving at once. Analytics are going to be helpful in certain areas, but in game situations where you have teams that are moving very fast on offense, it helps eliminate some of those tendencies that analytics may be able to point out. Because you just can’t set things fast enough. That in part, though, is great, because it makes college football more random.

Even though the 10-second rule has been tabled, it’s bound to pop up again, and I wonder if it’ll be better thought out when it does. Because of all the ways it wasn’t thought through, maybe the least-discussed aspect of the proposal was how it would affect moments in a game that had nothing to do with HUNH offenses.

I think a lot of people heard, “Most plays don’t get run before 10 seconds are off the play clock,” and think, “Oh, so that’s a small number of plays.” I hear that and think, “Something’s going to be affected.” So what is it going to be?

The ultimate irony here in this whole thing, because you saw the math, too — having a 300-pound defensive lineman? Running? From the 25-yard line to the middle of the field to a goal line stance? Is not possible in 10 seconds. It’s not gonna happen. But I can just see, what, October 11? Bama at Arkanasas. Arkansas down four. Third-and-goal. They need a touchdown. They can’t run a sneak at all. Alabama gets to line up their defense every time, and it maybe costs them the game. That might be funny. Watching a rule change affect one of these teams at home in front of everybody.