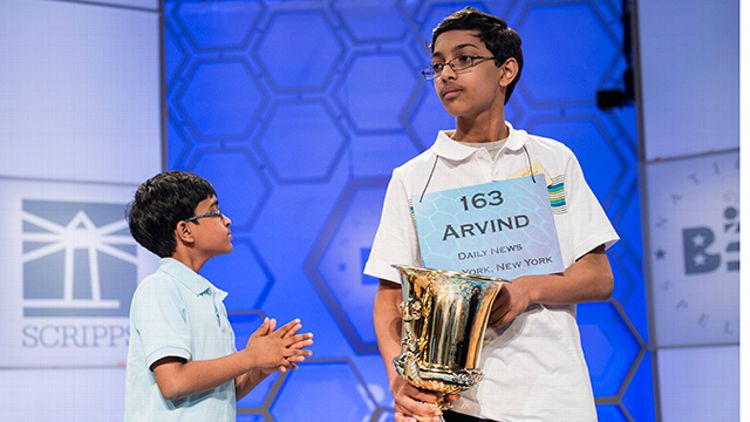 “What if Arvind finishes third again? How would he handle that?” I asked Arvind Mahankali’s parents while we waited for their son to return from one of the competition’s two computer-based tests. Srinivas Mahankali is a software engineer, and his wife, Bhavani, is a physician.

“We will tell him he’s accomplished everything he needed to accomplish here, educationally and socially, and that we’re proud of him,” Srinivas told me.

“Do you think that’ll be enough?”

“We will have to keep telling him,” said Bhavani.

When I first saw Arvind Mahankali on Wednesday in the Maryland Ballroom, he was in his usual pose — shoulders hunched, glasses perched low on his nose, an expression on his face that was either studious or politely bored. More than 200 spellers surrounded him onstage, but he had already survived the preliminaries and was waiting for the field to be whittled down to 41 semifinalists.

The night before, he sat before a test computer, put on a pair of headphones, and spelled 12 words — some as easy as “twinge” and some as difficult as “Ouagadougou” (the capital of the African nation Burkina Faso). Since there are too many spellers to eliminate onstage, this test would help determine who advanced to the semifinals. (A second test a night later would serve the same purpose in determining the finalists.) For the first time in bee history, Arvind and the others also had to define 14 words. Arvind was one of just three spellers in the entire field to register a perfect score.

No surprise there. This was his fourth time at the Scripps National Spelling Bee, and he was arguably the most famous speller never to have won a title. As a fifth-grader, the Queens native finished in a tie for ninth, tripping up on “presa.” He did even better the next year, reaching the 17th round before the word “Jugendstil” eliminated him in third place. He came into last year’s bee as the favorite, but what Arvind calls “the German curse” struck again with the word “schwannoma.” Again, he finished third.

The successful streak, including three straight New York City championships, cemented his place as one of the country’s best spellers. He appeared on TV with Anderson Cooper, he was featured in print, and his profile, by spelling standards, was remarkably high.

But he hadn’t won, and winning mattered to Arvind. As an eighth-grader this year, he was down to his last shot.

Srinivas knew his son had talent as a speller as early as fourth grade. Arvind’s school wasn’t affiliated with the national bee, though, and when Srinivas approached the principal to ask if that could be changed, the school refused. Instead, he was told about the South Asian Spelling Bee. Arvind entered in 2009 and finished third in the New York City region. That qualified him for nationals, and to everyone’s shock, the precocious 9-year-old came in second. Srinivas went back to the principal with the result; this time, he won the argument. The school joined the Scripps network.

After last year’s defeat, Srinivas and Bhavani gently suggested to their son that maybe he had gained all he could from the spelling bee, and it would be better not to compete in 2013. The field is so full of great competitors that winning sometimes comes down to luck. In 2012, Arvind knew all but two words in the final round, but one of them, “schwannoma,” found him when he stood before the microphone. There would never be a time when he could know every single word, so why submit to another year of stress when disappointment could come randomly?

Arvind refused. “Without me really achieving something,” he explained to me, in his slow, deliberate manner, “there wouldn’t be a sense of closure.”

In conversation, Arvind is very careful. He wouldn’t tell me the word that eliminated him from a third-grade spelling bee because it would be “humiliating.” When I asked him if he’d made friends with the other spellers at the bee, he said yes, but preferred not to say which ones. He refused to speculate about whether he had a reputation as a great speller among the other kids, and had no thoughts about who his rivals may be this year. His intelligence is plain, but beyond a secretive smile or two, there’s no cracking him.

Arvind’s younger brother Srinath is a wide-eyed 9-year-old who is almost exactly the opposite. When I asked him if he thought his brother could win, he explained it this way: “Going from 10th to ninth is like jumping from the top of a building to another building. But going from third to first is more like jumping from a building to a rocket ship. You would need a trampoline and a pogo stick.”

Srinath is a speller, too. When he was younger, he spelled “compare” as “compair” at a bee, and then got angry at his parents for using the word in conversation, thinking they meant to mock him. Srinivas and Bhavani had to be careful with their words for weeks.

There are different levels of greatness among the 281 spellers who make the national bee. All of them, obviously, are far above average. But within that group, there are some who belong to an elite level. They’re the ones who can identify and define all the roots and linguistic origins and who study the dictionary endlessly looking for strange words. When they meet a word they don’t know, which is rare, they can often use clues to help them suss it out.

For whatever reason, spellers of South Asian descent — specifically Indian Americans — are disproportionately represented at the national bee. This year, they made up nearly half of all the semifinalists, eight of the 11 finalists, and the final three spellers. Indian Americans have now won six straight spelling bees, and 11 of the last 15. For a group that represents less than 1 percent of the American population, it’s an almost unbelievable feat. NPR theorized that it may have to do with the important role of rote memorization in Indian education and a special emphasis on education that results in South Asian–only spelling leagues. That collective success is why Arvind’s second-place finish in the 2009 South Asian bee was such a significant moment; if you can be near the best at that competition, you aren’t far from being the best in the country.

Arvind’s rivals, too, were mostly Indian American. There was Vanya Shivashankar, a crowd favorite whose older sister won the bee in 2009. There was Pranav Sivakumar, one of just three spellers, along with Arvind and Grace Remmer, to get a perfect score in the preliminary round. There was Syamantak Payra, who won this year’s South Asian bee; Chetan Reddy, in his fourth bee; and Sriram Hathwar, who finished sixth in 2011.

All of them were capable of winning. All of them, as it turned out, would make the finals.

Srinivas told me that the word Arvind missed in the 2009 South Asian final was “sangfroid,” because they only pronounced it the American way, which rhymes with “steroid.”

Srinivas nodded apologetically at me. “Sang-fwah,” he said.

When the semifinal round ended, 18 spellers remained. More than 11 million took part in the local and regional bees leading up to this moment, so it was appropriate that the 18 would be reduced to 11 — one to represent each million — based on the results of the writing test.

Arvind made the cut.

I asked him if he could estimate how many words in the English language he didn’t know.

The question: Would one of those 300 find him in the finals?

ESPN has carried the championship round in prime time since 2006, and this forces the spellers to be very patient while the network airs segments on the spellers’ hobbies and breaks for commercial. When their time comes, the lights surrounding the set at the Maryland Ballroom change colors as the two-minute time limit approaches, elevating the drama.

Over the first hour last night, only two spellers were eliminated, and it began to seem like this group might be too good. But the first big casualty came when Grace Remmer, one of the favorites, misspelled “melocoton” in Round 10. She earned the first standing ovation of the night, and it seemed to break a spell. They were indeed mortal. That same round, Chetan Reddy and Syamantak Payra (the South Asian bee champion) were also eliminated. Arvind survived on “thonnier,” which is a boat people from Brittany would use for tuna fishing.

In Round 11, and when he casually nailed “chalumeau,” it guaranteed him his third straight top-five finish. I watched his parents, and I watched Arvind, and with every round the torture increased; a win would be a gigantic triumph, but with every speller gone, it left the door open for another agonizing near miss.

In Round 12, Arvind stepped up to the microphone and heard the word “dehnstufe.” Origin? German. The crowd actually gasped, but Arvind only smiled. Whatever else might happen, the last year of studying had ensured that he wouldn’t be eliminated on a German word.

Amber Born, an aspiring comedian who had some legitimately funny lines onstage — “She seems nice,” she said, after watching a video segment about herself — lasted longer than anyone expected, but fell in Round 12.

That left three boys who had become friends through years of competition: Arvind, Pranav, and Sriram. Dr. Jacques Bailly, the official pronouncer, moved to a list of 25 championship words. This was the finale.

Sriram Hathwar knew the root “ptyal” was Greek for “spit,” and he knew that “agogue” meant to secrete, but he didn’t know the combining letter in “ptyalagogue” was an “a.” That finished him in Round 13, leaving just Arvind and Pranav, two of the original perfect preliminary spellers.

Through “haupia” and “kaumographer” they dueled, but it was only one round later when Pravan misspelled “cyanophycean.” Two more words, and the trophy would belong to Arvind.

After it was over, he stood stone-faced among the confetti and the cheers, and thought his private thoughts. His brother ran to his side, and Arvind acknowledged him, but mostly he just stared off into the distance. He would tell ESPN’s reporter that in the past year, an old curse had become a blessing. It was the end of a hard journey that had defined his life for years, and even in that moment you could see him contemplating a future without spelling. It meant freedom, but it also meant an absence. “It won’t really be the same after this,” he told me a day earlier, and for better or worse, that reality dawned on him in the moment of his triumph.

Arvind’s championship word was “knaidel,” which is a type of dumpling made from matzo meal. He allowed himself a smile. He asked for the language of origin, but he already knew the answer. What else could it be?

Filed Under: Shane Ryan, We Went there