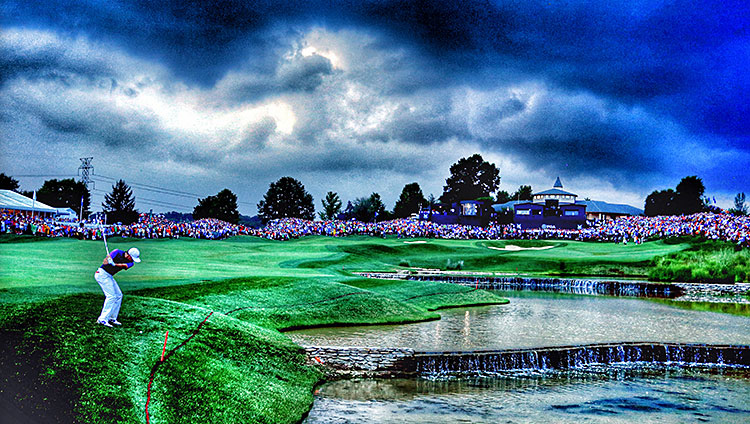 On the sixth hole at Valhalla, on Sunday, play was so backed up that Rory McIlroy and Bernd Wiesberger, playing in the final group, arrived at the tee to find Phil Mickelson and Rickie Fowler waiting for the fairway to clear so they could hit their drives. This kind of meeting between groups is rare in golf — the idea is that play flows unhindered, so that while you may wait for the group ahead of you, you’ll never be standing in the same place — and happens only in circumstances of extreme delay.

The only other time I’ve seen it in person came at the Pebble Beach Pro-Am in February, when a massive pileup stranded six golfers on the fifth tee, and those six were John Daly, Dustin Johnson, Wayne Gretzky, Tom Brady, Bill Belichick, and Kid Rock. (Belichick would later brush off a reporter after his round because he was angry at missing a putt, but that’s neither here nor there.) The point is, the tee party is a rare scene, and it may be the one situation in golf for which there is no standard of etiquette.

Wiesberger, the 28-year-old Austrian and odd man out among a star-studded leaderboard, walked over to Mickelson and Fowler to exchange a few polite words. At the start of the day, everyone expected him to fade down the leaderboard, because of a lack of experience and our desperately wanting him to get the hell out of the way of the studs. And he was in the process of obliging. McIlroy’s caddie, J.P. Fitzgerald, who gives a very boring interview but whom McIlory will defend to the death, said hello to the two golfers and made a second or two of polite chitchat.

At that moment, Mickelson stood at 2-under for the day and had erased a three-shot deficit with McIlroy, the third-round leader. Fowler was coming off three straight birdies and was now the tournament’s solo leader at 13-under, a shot ahead of his two rivals. Dressed in an orange and gray outfit, he was leading a major championship on Sunday for the first time. He was the only player to earn a top-five finish in the first three majors, but that frequently regurgitated stat cut both ways: It was impressive as hell but a nagging reminder that he hadn’t won.

As Fowler and Mickelson shared a word about golf courses and Mickelson bounced a ball off the head of his hybrid, it was impossible not to notice the best player in the world sitting quietly on a bench, staring at nothing.

It was a fascinating move. Was McIlroy just annoyed at himself, having suffered an ugly three-putt on the third hole? He had given up his lead so easily … almost as easily as he’d taken it from Sergio Garcia a week earlier. Was he so thoroughly focused that he was avoiding any interaction, the way he does on the driving range before a round? Was he consciously trying to intimidate his competitors? It was hard to know if it was working, but they at least seemed a bit disconcerted that he hadn’t even said hello.

All of these theories are possibly wrong, and possibly stupid, and, who knows, maybe he nodded to them and I missed it, or maybe professional golfers have learned the trick of speaking telepathically to sidestep the eavesdropping bastards of the media. What I know for certain is that McIlroy, sipping a bottle of water and letting his eyes roam everywhere — including over those players he’d declined to address — seemed totally comfortable. It’s some kind of gift to be totally at peace with bold choices, to be self-assured while those around you grope at greatness between the waves of their neuroses, and to be ruthless without stupidity. Unconsciously, I think, without malice, McIlroy controlled the moment. Everyone else — including Phil Mickelson, mind you — reacted to him. 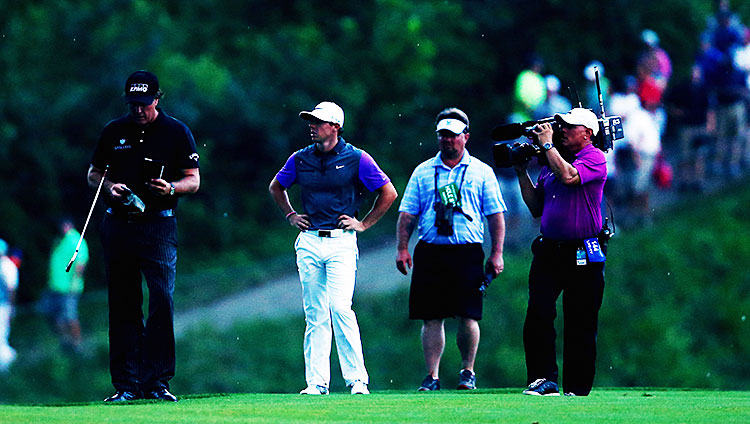 There’s a hidden pattern to a golf tournament, and it’s impossible to see it except in retrospect — at which point it loses all predictive value. What I saw on Sunday, in the incredible Louisville humidity (in some places an afternoon rain shower breaks the stifling heat, but in Kentucky it’s seen as encouragement), was an incredible performer at the peak of his talents giving two opponents a rare chance to beat him.

After he went on to bogey that sixth hole, McIlroy was two shots behind. The Fowler-Mickelson duo was the most exciting pairing we’ve seen in a major all year. They birdied hole after hole, building the lead, bumping fists after each putt, and generally reveling in the huge roars of the excellent gallery. This was golf at its most robust and wonderful, and the momentum built as they rode that high all around the course. They reached the point where another birdie, another triumph, would have made the upset tangible.

You can’t escape the nerves forever, though. With a birdie on the 11th hole, Mickelson went to 5-under for the day; Fowler was 4-under, and they shared the overall lead at 15-under with Henrik Stenson. Then McIlroy crushed a 3-wood from 284 yards on the par-5 10th, and suddenly he had an eagle putt to reduce the lead to a single stroke. They heard the roar on no. 11, and when McIlroy made the putt, it was like reality reasserting itself. Fowler wouldn’t make another birdie all day, and Mickelson had just two left in the tank, one of those on no. 18, when it was too late.

While they faltered, McIlroy boomed his drives down the middle and gave himself birdie opportunities on hole after hole. Before long, he was winning, and as darkness fell on Valhalla, he hit a brilliant approach out of the sand on 17 to set up the birdie that would put him two shots ahead of the field and seal his win.

For 2014, at least, the PGA Championship can shelve its inferiority complex. Euphoric surges, rabid crowds, remorseless comebacks, and the crowning of a new icon in a sport that had lost its king … we’d been waiting for this Sunday all year.

Recently, a prominent golf agent made me privy to a piece of advice he gives every new client: “Every day, if it’s a good day, you give two performances … one on the golf course, and one in the media room. And you’ll never be a star until you can nail them both.”

McIlroy nails them both.

You know about the golf, but this man is a virtuoso with the media, and it’s for the simple reason that he’s thoughtful. That’s the word I keep hearing from my colleagues, and I think it’s the best description. He’s smart enough to know what information to withhold, but also smart enough to make us forget he’s doing it. Such are the attentive quality of the answers. He’s nice, too. On Saturday, a reporter asked him if his final round would be different from his wins at the British and WGC, since he had a much slimmer lead. The problem was that McIlroy had actually trailed at the WGC going into Sunday, but he waited until about the third sentence to insert that piece of information, innocuously, without making the questioner feel small. When you’re in a low-status position, as the media inevitably are in the presence of professional golfers, it’s the little things that preserve our dignity, and McIlroy seems to get that in a way that a blustering narcissist like Bubba Watson never could.

He’s also the kind of guy who, when he’s seen your face a few times and you’re not a complete stranger, you feel that it’s probably OK to ask him a stupid question. After he won the British Open at Hoylake, I asked him how he had spent his Saturday night. The answer was a movie, and the movie was Jackass Number Two. At the WGC-Bridgestone in Akron last week, I repeated the question and got the delightful response of Kick-Ass 2. After his press conference last night, I caught him on the escape golf cart before it conveyed him to wherever heroes go after Valhalla, and repeated the question. This time, he told me, he’d watched the USA Network drama Suits. This, as far as I could tell — and I mean no disrespect to Suits — was his only disappointing answer of the day.

About Last Weekend: All About Johnny