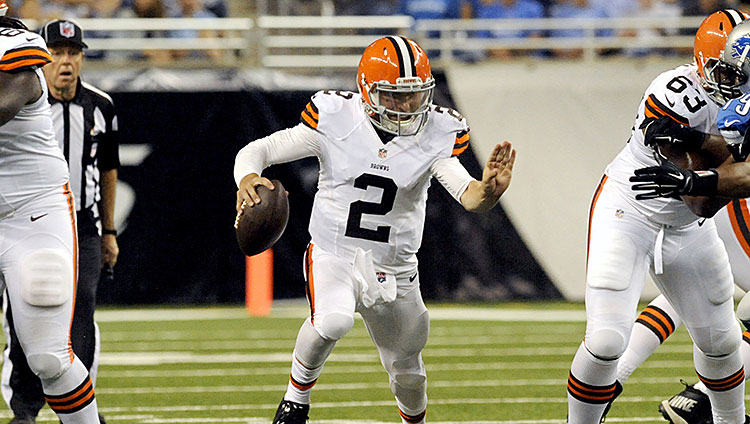 Here’s all you need to know about Johnny Manziel’s preseason debut: It drew a standing room–only crowd to Hilton Head Island’s official Browns Backers bar, where willing vacationers chose Browns-Lions over the beach on a Saturday evening. My family had to arrive 90 minutes early just to guarantee a table, and we were seated next to a couple wearing matching Money Manziel shirts. God bless them and their relationship.

As such, this particular installment of the Great Lakes Classic was a rather unique exhibition matchup. With Brian Hoyer starting, standard preseason viewing practices were wholly disregarded. Instead of tuning in for maybe the first quarter, pretty much everyone was waiting for the first team to exit and garbage time to begin. This, of course, meant watching an ungodly amount of Dan Orlovsky. But to get a glimpse of Manziel, certain sacrifices had to be made.

So it was a major, major letdown when Manziel’s first series, which began with 7:32 remaining in the second quarter, comprised three plays, including a six-yard completion on first down and a rush for no gain on third-and-1. Kyle Shanahan’s inexplicable refusal to go for it on fourth-and-1 was a total buzzkill, and the Lions basically exhausted the clock on their subsequent possession, leading to a halftime show in which the NFL Network crew was forced to breathlessly analyze Manziel based on only a four-snap sample size.

It was worth it, though. Because of Marlon Moore’s 52-yard kickoff return, Manziel had the good fortune of beginning his second series in Lions territory, and he proceeded to flash his trademark knack for improvisation with a pair of dazzling scrambles. After a field goal, the ball went back to our main man Orlovsky, at which point I started to root for the Lions to score on every single play just so I could see Manziel sooner. This must be what true love feels like, I thought. Minutes later, Manziel zoomed upfield for 16 yards on a third-and-8, and nothing was ever the same.

Hoyer the Destroyer had a nice run; problem is, he can’t run. Manziel can, and I’ve always been partial to mobile quarterbacks, mainly because of the incredibly formative experience that was playing with Michael Vick in Madden 2004. If Manziel continues to replicate digital Vick in real life, I can’t help but ride for him. Neither, it seems, can Mike Pettine.