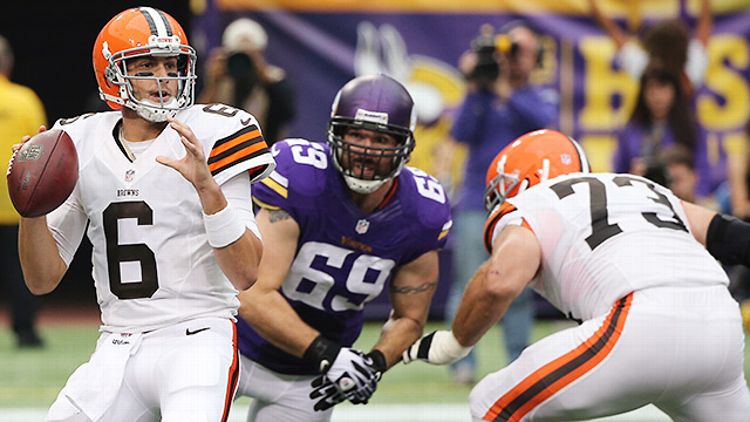 We’re not even a quarter into the season, and it seems like almost every starting running back has suffered an injury. I’m reading Stephania Bell’s blog as avidly as I read Harry Potter back in the day, and I was a Harry Potter freak. What’s more, outside of four or five elite guys, the running backs who are still healthy are mired in maddening committees. It’s truly outrageous, and in some way, Mike Shanahan is surely to blame.

Anyway, with so many backups suddenly becoming hot commodities, I’ve power-ranked the best of the bunch into one convenient list. Enjoy!

1. Giovani Bernard, Bengals. I won’t rehash my thoughts on Gio, but I’ll say that it’s strikingly obvious just how much more effective he is than BenJarvus Green-Ellis.

It’s encouraging to see Bernard match the Law Firm in carries. Bernard also caught all four of his targets on Sunday, which is great, because Green-Ellis remains a nonfactor in the Bengals’ passing game. The touch ratio will likely continue to swing in Bernard’s favor, and I’d be surprised if he wasn’t a consensus first-round pick by next season.

2. Joique Bell, Lions. In Reggie Bush’s absence, Bell was the fourth-highest-scoring back in Week 3, totaling 132 all-purpose yards and a touchdown to boot. He’s starting material in PPR leagues regardless of Bush’s health, and he figures to receive a larger share of the load than initially planned once Bush returns, since the Lions probably want to keep their starter off crutches.

3. Ahmad Bradshaw, Colts. Although Chuck Pagano has compared Trent Richardson to “a rolling ball of knives” and seems intent on handing him the starting job once he gets up to speed with the offense, it’s hard to believe Richardson will severely cut into Bradshaw’s workload if the veteran continues to outperform T-Rich. This’ll end up being more of a committee than a one-man show.

4. Jacquizz Rodgers, Falcons. Steven Jackson probably won’t play until Week 7, so Rodgers is a fringe top-20 back in the meantime. (Jason Snelling is an acceptable flex play in deeper leagues.) However, Rodgers’s value will plummet as soon as Jackson reassumes starting duties. Trade Quizz before then if you can.

5. Fred Jackson, Bills. Despite sustaining a quad injury on Sunday, C.J. Spiller expects to play this week, so don’t get too excited about Jackson’s 10.3 yards per carry or his four receptions. With a tough matchup against the Ravens looming, the Coe College product would have only been a low-end RB2 or a high-end flex in Spiller’s absence, but he’s essentially devoid of value when Spiller starts. Keep Jackson on your roster in case Spiller continues to break down, however. The vet is a useful handcuff.

7. Brandon Bolden, Patriots. I’d like to call Bolden a stopgap for Shane Vereen, but he’s not quite dependable enough on a week-to-week basis. Let’s see what he does in Atlanta before elevating him to PPR flex status; remember, he’s fooled us before.

8. Johnathan Franklin, Packers. He was a great replacement for James Starks against Cincinnati, at least until the fumble that cost Green Bay the game. Still, the Packers are on a bye this week, so there’s no point in adding Franklin, as Eddie Lacy should return to the starting job in Week 5.

9. Isaiah Pead, Rams. I said I’d power-rank “the best of the bunch,” so I think this is where the list ends. Wait, one more …

The Raiders new mascot, the Raider Rusher, is a character on Nickelodeon's NFL RUSH ZONE. pic.twitter.com/p2Q9nfNRdp

Brian Hoyer is a lot of things: Cleveland born and bred; Tom Brady’s longtime understudy; seemingly the sole survivor of the John L. Smith era at Michigan State. Now, we can slap something else onto that list: MUST-ADD WAIVER WIRE PICKUP.

OK, perhaps I’m getting a tad ahead of myself. Perhaps it would be wiser to wait for another three-touchdown outing or two before rostering the man, the myth, the legend, HOYER THE DESTROYER. Perhaps we should hold off until Hoyer, you know, actually wins the job for more than one week.

Browns coaches are reportedly undecided on whether Hoyer or Brandon Weeden will start in Week 4, which makes absolutely no sense, considering Hoyer is clearly better equipped to exploit Cleveland’s offensive talent than is Weeden, who has forced Browns fans to stomach his atrocious play through 17 career games. Hoyer threw three interceptions on Sunday, but he demonstrated outstanding precision on plays like this, this, and this; Weeden, meanwhile, does things like this:

You might be wondering how much Cleveland’s quarterback choice really matters. Well, quite a bit. No, you’re probably not going to start Hoyer even if he earns the job. But tight end Jordan Cameron and receiver Josh Gordon are two of the more intriguing pass-catching weapons in fantasy football at the moment, and Cleveland coach Rob Chudzinski’s decision impacts those players’ value considerably.

To wit: I own Gordon in two leagues, and I spent much of last week attempting to trade him. The logic for doing so was unassailable.

Then Weeden got hurt, Chudzinski named Hoyer the starter over Jason Campbell, and the owner with whom I was negotiating backed out, believing (somewhat reasonably) that Hoyer would be an even greater detriment to Gordon’s production than Weeden or Campbell. Of course, his rationale turned out to be utter poppycock, and owners got huge days from Gordon (22 fantasy points!) and Cameron (24!). I’m not saying the Hoyer-led Browns could be the next Greatest Show on Turf, but I’m not not saying that, either.

One final Cleveland note: After holding Adrian Peterson to 88 yards on 25 carries and a long of just nine yards, the Browns’ run defense has firmly established itself as one of the best in the league. Football Outsiders agrees, and from now on we should all expect below-average performances from backs when they face the Browns.

So my daughter is laying here under me and just out the blue she says… I can't believe you lost to the Browns Daddy! Smh

2. Can I Please Play This Team Every Week?

Take a look at these two stat lines.

DeMarco Murray versus the Rams in 2011:

Heaven for Murray is simple: Nelly blasting through his headphones, Meet Me in St. Louis playing on an endless loop, and arches everywhere. Lots and lots of arches.

3. Is It Bad If My Defense Is My Top Scorer? Not If It’s One of These Defenses? OK, Cool.

This honor goes to the five defenses that scored 20-plus points in ESPN standard leagues: the Ravens, Packers, Panthers, Bears, and Chiefs. You guys produced a shitload of fluke victories in fantasy leagues this weekend, and I’m totally not just saying that because I was victimized by Carolina. But seriously, I mean come on. The Panthers? They were, on average, ESPN’s 27th defense selected, which means that literally nobody outside of the one leaguemate I happened to be facing drafted them. You think it’s moral to feast off of Curtis Painter’s precious garbage time? Fine. Be that way. But you’re no longer on my Christmas card list.

4. Would You Look at What You Made Jim Harbaugh’s Face Do?

After a spectacular 30-point performance against Green Bay in Week 1, most folks assumed San Francisco’s Colin Kaepernick would be a legit top-five fantasy quarterback going forward. But he followed up that debut with clunkers in Weeks 2 and 3, and folks got pissed. Like super-duper, steam-emanating-from-their-ears pissed. And they might have a point. While I thought his five-point outing in Seattle was perfectly excusable, what with the Seahawks’ fantastic secondary and the whole monsoon going on, Sunday’s four-pointer against the Colts was a rather disturbing affair.

Maybe that’s just what happens when a team tries to pass off Anquan Boldin as a no. 1 receiver. At this stage in his career, Boldin is a security blanket, the type of guy who bails his quarterback out on third down, and he’s filled this role tremendously. But he’s not a streaker, and he can’t create enough separation to warrant regularly receiving 17 targets per game. Michael Crabtree can, but he won’t be ready to play until late November/early December. In the meantime, Jonathan Baldwin must step up (unlikely, but possible), or the 49ers must acquire someone who will, lest Kaepernick become football’s answer to Linsanity. Also, more designed runs can’t hurt!

Bilal Powell, the man I couldn’t recommend with a straight face, went out and gained 149 yards against the Bills, and he looked semi-good doing it. There. It is known. Hats off to Mr. Powell, who figures to have more games like this with Chris Ivory sidelined, and is now an eminently flexy individual.

1. RB Willis McGahee, Cleveland Browns (available in 72.3 percent of ESPN.com leagues). Claim McGahee strictly on principle. Unquestioned starting running backs are hard to find heading into Week 4, and that’s what McGahee will be. Don’t let Sunday’s nine yards on eight carries scare you away — he basically met his teammates and coaches on the team flight to Minnesota, so he can be forgiven for one dud performance, and that number’s skewed anyway by one dastardly run for minus-six yards.

T2. WRs Kenbrell Thompkins (65.1 percent) and Aaron Dobson (91.9 percent), New England Patriots. Ladies and gentlemen, history has been made. To celebrate the first tie on our #WWPL, go out and, I dunno, watch a bunch of soccer. Then watch a flummoxed Donovan McNabb try to come to terms with the Executive Committee’s decision:

I can’t think of two more deserving folks than Thompkins and Dobson to ring in the draw. I mean, they both kind of suck, but Tom Brady is their quarterback, which often leads to performances that are not remotely indicative of a receiver’s actual ability. Two of Thompkins’s three receptions on Sunday went for touchdowns, and Dobson impressed with seven receptions of his own (and would’ve easily scored if not for an off-target pass from Brady). Gronk’s imminent return may undercut their production somewhat, but both are worth owning in 12-plus-team leagues.

5. QB Andy Dalton, Cincinnati Bengals (70.8 percent). Bye weeks begin on Sunday, with the Packers and Panthers up first, so Aaron Rodgers and Cam Newton owners must find replacements if they didn’t draft backups. While I’m not overly fond of Dalton as a real quarterback, he’s incredibly consistent, which is perhaps the most desirable trait of all for a one-week fantasy sub. Dalton will get you 250 yards and two touchdowns per game, so for these purposes, he’s money in the bank.