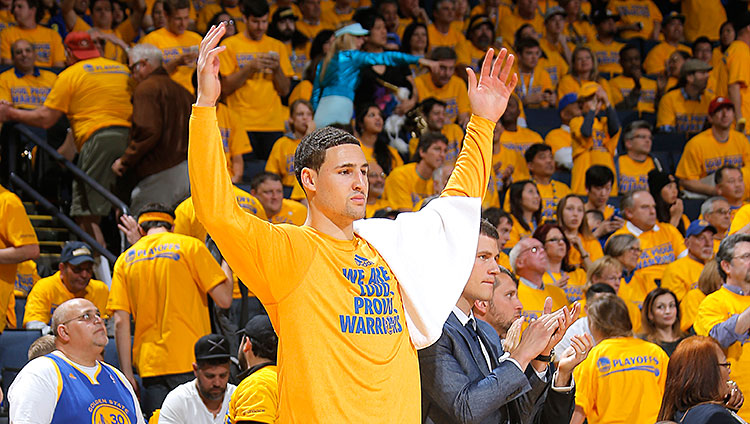 The path to an NBA championship is full of twists and reversals, but the surest way to at least get in the conversation is by having star players. By not including Klay Thompson in a proposed deal for Kevin Love, the Warriors chose to embrace team continuity rather than adding a bona fide NBA star. They passed on the very thing so many teams spend years just trying to manufacture a chance at having.

Love is a star and Thompson — a nice player, excellent shooter, and solid defender — is not. Yet the thinking behind the non-move is reasonable despite the gulf in talent between the two players. It’s certainly the safe move; it’s a choice between known and unknown risks. Thompson can continue to act as the comb-over for Steph Curry’s defensive bald spot, the chemistry remains intact (an underrated aspect with Curry already discomfited over the dismissal of Mark Jackson), and, of course, we all get the added benefit of calling two guys Splash Brothers.

All of which is to say this: No pressure, Klay Thompson, but you kinda have to be a soul-snatching backcourt murderer next season. At the very least, you need to tighten up that handle.

The Warriors last won the title in 1974-75 behind the league’s second-best offense, a top-five defense, and Rick Barry — a.k.a., the least likable NBA great ever. A broad synopsis of the Warriors’ intervening campaigns shakes out thus: long periods of fallow playoff-less impotence punctuated with a sprinkling of punch-above-their-weight lineups that managed to land a handful of memorable licks — the Sleepy Floyd game, C-Webb dunking on Barkley, Baron disintegrating AK-47 — before getting knocked out, usually in the second round.

Curry has been the Warriors’ best player since Barry and is one of the most hypnotically surreal shooters in NBA history. His pull-up should be sealed in a space capsule and launched toward the Oort cloud as a representative of human achievement. Last season, Curry averaged 24 points on 61 percent true shooting, 42 percent from 3, and 88.5 percent from the line, putting him on a list with Kevin Durant, Dirk Nowitzki, Larry Bird (twice), and Peja Stojakovic. Factor in that Curry also averaged 8.5 assists and that list becomes just Steph.

A star in his prime getting traded is like a unicorn; it very rarely shows itself, and when it does, you have to hope it wants to come to you. Weird, then, that with one star player already in hand, the Warriors should suddenly embrace conservatism and turn down what is likely a generational opportunity to acquire another one via trade. Weird, but at the same time not wholly insensible.

It is, in a way, a rejection of the things that have made the Warriors the Warriors these last 39 years — the positional interchange; the safety-off, remorseless, long-range bombing campaigns; the free-galloping offense first, second, and last (basically, Nellie Ball) — in favor of something like old-school orthodoxy: big men doing big men things, a commitment to defense, keeping an old-fashioned 2-guard in an increasingly stretch-4 league.

Nellie Ball created a few indelible playoff moments, but, like a snowflake in the palm, they didn’t stick. When viewed this way, the Love non-deal seems less a fear of dreaming big than Golden State finding a sort of maturity of intent.

It’s been a summer of unforeseen organizational forks in the road. Best-laid plans rarely survive encounters with fate and free agency. LeBron’s non-prodigal return to Ohio upended four years of Eastern Conference power balance. Paul George’s foot landed against the basket stanchion during a Team USA scrimmage, casting a pall over the entire endeavor, focusing attention on the involvement of NBA players in international basketball in ways that seem starkly antithetical to an entire chapter of American sports history post-1992, and all but consigning the Pacers’ 2014-15 season to the dustbin of contention. There is Chris Bosh spurning Houston to stay in Miami, turning a potential Daryl Morey touchdown and end zone dance into a summertime lateral. And then there’s the Warriors and Klay Thompson.

There’s the risk you know and the risk you don’t. The best-case scenario for the Warriors is probably something like this: Love disappoints in Ohio, adding grist to the “not a star” mill; Thompson continues to be solid on defense and finally develops the off-the-dribble creativity the team lacks when anyone but Curry handles; Kerr resumes Jackson’s defensive gains while installing a more dynamic offense that manages to get something out of the team’s bench; everyone stays healthy; and the Spurs’ Dorian Gray portrait finally runs out of juice.

Worst-case scenario: Love is the player the numbers say he is, but now in wine and gold instead of blue and gold; Thompson either slumps or doesn’t improve fast enough to wedge the Warriors’ window open a few inches wider, then demands a max starting at somewhere around $15 million; Andrew Bogut’s skeletal structure remains worryingly fragile and Andre Iguodala’s knees begin audibly creaking; Curry tweaks his ankle; the Spurs keep doing the thing they’ve been doing almost 20 years; the window comes haltingly to a close; Curry flees in 2017; and Warriors fans look back at the summer of 2014 and wonder about what might have been. Yet again.

So, no pressure, Klay Thompson.