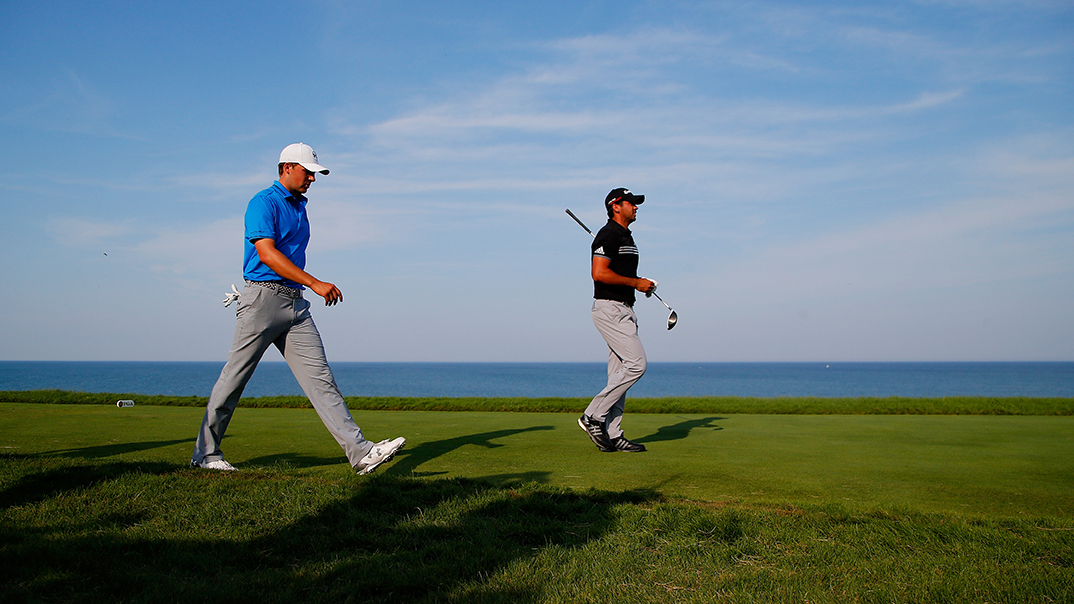 An Australian named Jason Day won the PGA Championship at a course called Whistling Straits in Wisconsin on Sunday. That was the golf story, and it wasn’t a bad one at all, given that Day grew up “on the wrong side of the tracks” in Queensland, had to overcome the death of his father at age 12, and had several near misses at major championships in years gone by.

But here’s the thing about this sport: When it transcends the ordinary, there is the golf story and there is the story. For years, that story was Tiger Woods, who was essentially a guaranteed sidebar for every newspaper writer in America (myself included) four times a year over the course of a decade; it didn’t matter what Woods actually did in a major tournament. It only mattered that he’d been there and that he’d swung a club, as he did briefly at Whistling Straits, failing to even make the cut.

And so this is where Jordan Spieth is now: He is the story, even if he’s not the golf story. He will be from now on. Even in finishing second to Day, Spieth elevated himself to the no. 1 ranking, ahead of Rory McIlroy; even in coming up short to Day’s record-setting performance,1 Spieth capped off a year in which he won two majors, came up one putt short of potentially making a playoff in a third, and finished a few strokes behind in the fourth. It was arguably the greatest year by a young golfer ever, and certainly the greatest year for any golfer since Woods began his slow and steady decline into the realm of inexplicable Point Break wardrobe changes.

“This is as easy a loss as I’ve ever had,” Spieth said afterward, “because I felt that I not only couldn’t do much about it, but as the round went on, I also accomplished one of my life-long goals and in the sport of golf. That will never be taken away from me now. I’ll always be a no. 1 player in the world.”

I don’t need to tell you much more about Spieth’s overarching decency toward the media, and the way he ingratiated himself to a golfing press that had long since grown jaded with Woods’s dead-fish aura, since Grantland’s Bryan Curtis did it the other day. But it’s worth noting that Spieth doubled down again on Sunday, profusely complimenting Day’s performance while somehow managing to praise his own year in a manner that felt laced with humility. He mentioned how he caught a break at the U.S. Open when Dustin Johnson missed a putt; he mentioned how “cool” it all was, how “amazing,” and how hard he’d worked just to get here. There’s skill in that; there’s a brilliance, as longtime golf writer Dave Kindred told Curtis, in being able to mask the egotism and cruelty required to be great while simultaneously proving yourself to be great.

For years, people gravitated to golf because it seemed to hold itself to a different standard of sportsmanship and grace. And maybe some of that had to do with issues of race and class and exclusion, and maybe all those lofty mid-1990s notions we had about Woods — who played the sport with the killer instinct of a Michael Jordan — fundamentally changing the way the sport was perceived and played were always misguided, since golf just tends to toddle along in its own separate box, always destined to feel like something between a sport and a highbrow cotillion.

And yet I still think this could wind up being a remarkable moment for golf, in that the best player in the world is now in the midst of a massive ascension, and the former best player in the world is in the midst of a stunning fall. That’s an incredible and cinematic confluence, and it may not last much longer one way or the other, but for now it is everything. If that feels like a simplistic narrative, it almost certainly is, but for people who find this sport distant and complex and overly wonky and fundamentally boring, this could be a way in. Come see the brilliantly nice guy succeed; come see the humbled ex-champion fail.

There’s no way, obviously, for the PGA Tour to make that selling a point — for the powers that be to somehow market the notion that these dueling narratives are essentially everything that transcends an often-stultifying sport into the realm of an AMC drama — but it’s there, as we head into next year, into four more majors that Jordan Spieth could potentially dominate, and four more majors that will likely further the decline of Tiger as we once knew him. It’s everything this sport should be, in that it allows us to choose sides, to make it about more than just golf, and turn it into the kind of story that makes the rest of us sit up and pay attention.