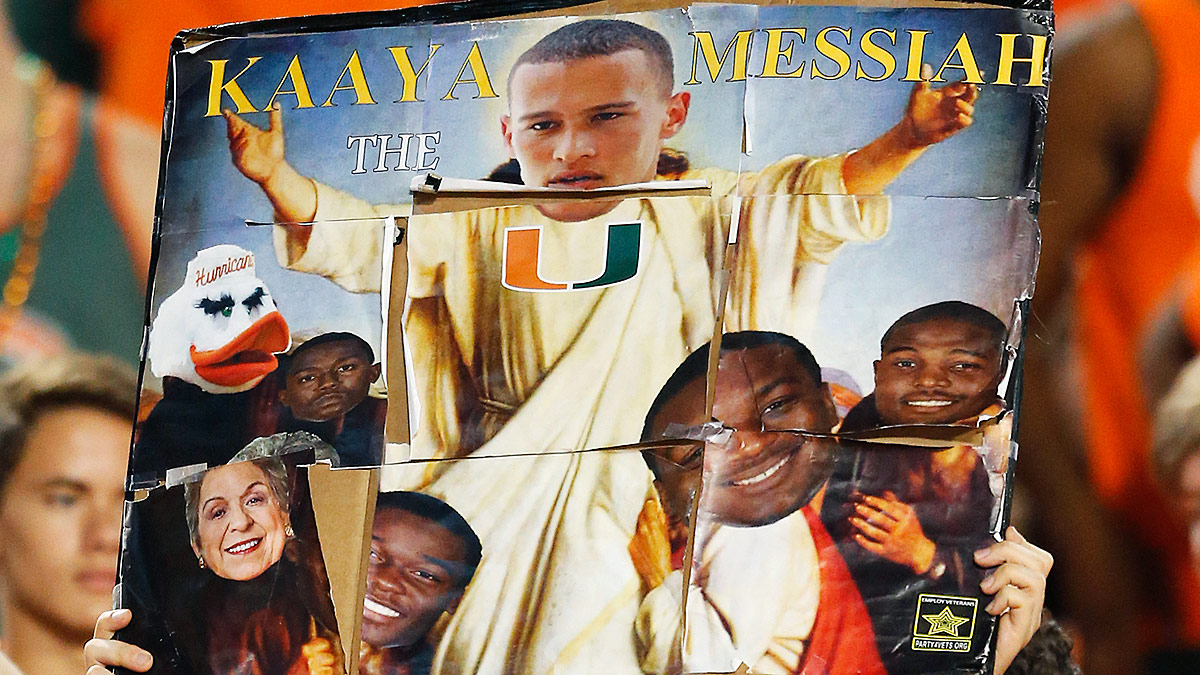 Brad Kaaya grew up in West Hills, California, at the foot of the canyon that forms the northwestern border of Los Angeles County, which is hardly the place you’d expect a kid to cultivate a lifelong bond with a team that plays on the opposite edge of the continent. In Kaaya’s case, though, he felt drawn to Miami for as long as he could remember: As he tells it, one of his earliest memories is of the juggernaut 2001 Hurricanes outfit that crushed Nebraska for the national championship practically next door, in the Rose Bowl, imprinting onto his developing brain the image of The U at the height of its swaggery power.

When he played NCAA Football, he played as Miami. When, improbably, Miami turned out to be the first major school to offer Kaaya a scholarship during his junior year at Chaminade High, he committed, then stayed committed when offers rolled in the following fall from USC and UCLA, among others. When he was named the Hurricanes’ starting quarterback last August, before he’d even suited up for his first college game, it was another sure sign that Kaaya was right where he belonged. As a true freshman, he took every meaningful snap and edged out Jameis Winston for the ACC lead in touchdown passes (26), yards per attempt (8.5), and overall pass efficiency (145.9). As a sophomore, he’s graduated to fielding questions about his place in Miami’s QB legacy.

“I think about all the great quarterbacks that came before me,” Kaaya told reporters last month at the ACC’s preseason media days. “I’m wearing the U right now. I think about that all the time.”

For a lot of players, that sort of appeal to the past might sound like boilerplate press conference patter. In Kaaya’s case, though, it’s worth considering just how ancient the history he cites must seem from his point of view. Compared to the generation gap in perceptions of The U, the physical distance he’s covered is trivial. Kaaya was born in 1995: When the Hurricanes briefly annexed Pasadena in January 2002, he was just 6 years old; by the time he was old enough to watch a football game from start to finish, the Canes had long faded from national relevance, and aside from the breathless reaction to the Nevin Shapiro scandal in 2011, they’ve yet to return. The lineage of above-the-fold quarterbacks that Kaaya feels driven to uphold — a torch that once passed directly from Jim Kelly to Bernie Kosar to Vinny Testaverde to Steve Walsh to Craig Erickson to Gino Torretta, each of whom left Miami as either a national champion, a Heisman Trophy winner, or a first-round draft pick — has lain dormant for more than 20 years. 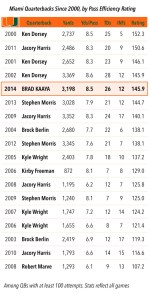 If you’re over 30, you can remember a time when starting quarterback at The U was the most high-profile position in college sports, a springboard for immediate fame on campus and eventual fortune at the next level. When Kaaya arrived in Coral Gables last summer, though, Miami was more than a decade removed from its last conference championship1 or top-10 finish in the AP poll, and the memory of its last great quarterback had grown fainter still. In Kaaya’s lifetime, only one Miami quarterback has been drafted at all, and that player, Ken Dorsey, was the final QB off the board in the seventh round in 2003.2 The succession of pretenders who preceded Kaaya will be remembered as either pedestrian talents (Kirby Freeman? Robert Marve?) or outright busts, if they’re remembered at all.

And the impact of that fleeting footprint is felt even in Miami-Dade and Broward counties: Many of the most coveted recruits in Miami’s own backyard have begun to treat coach Al Golden’s version of The U like an afterthought. Of the 140 Florida prospects awarded a four- or five-star grade from 247Sports’ composite ratings in the last three (2013-15) recruiting classes, only 15 signed on to play for the Hurricanes. Of the top 25 Florida prospects in the most recent class, 16 played for high schools in or south of Orlando; of those 16, all but one3 opted to take his talents northward, most of them to ACC rivals Florida State4 and Clemson.5 After letting local headliners Joey Bosa (Ohio State), Alex Collins (Arkansas), Matthew Thomas (FSU), Dalvin Cook (FSU), Sony Michel (Georgia), Ermon Lane (FSU), Travis Rudolph (FSU), and Travonte Valentine (LSU) leave the Miami-Dade/Broward area in 2013 and 2014, the Canes missed out on a pair of 2015 five-stars (McFadden and Alabama-bound Calvin Ridley, the top-rated wide receiver in the nation) who grew up within an hour’s drive of the UM campus. In the 2016 class — still a work in progress — Miami has yet to pick up a commitment from a prospect ranked in the state’s top 10.

In that light, maybe it’s less irony than necessity that the mantle for lifting the Hurricanes from mediocrity has fallen to a transcontinental transplant. So often over the past decade, the quarterback has been regarded as the weak link holding back an otherwise loaded outfit, and there were times last year when that was also arguably the case with Kaaya. Although the 2014 team produced seven 2015 draft picks — six of whom originally hail from Greater Miami, including first-rounders Ereck Flowers and Phillip Dorsett and the school’s all-time leading rusher, Duke Johnson — all of that ostensible veteran talent somehow wasn’t enough to prevent a four-game losing streak to close the season, or a losing overall record (6-7), or a tie for last place in the ACC’s Coastal Division. The mass exodus for the next level has left an exceedingly green lineup for 2015 that, aside from Kaaya, will return only two other starters (right guard Danny Isidora and receiver Malcolm Lewis) on the entire offense. The media’s preseason All-ACC team features zero Hurricanes, and only four Canes (Kaaya, safety Deon Bush, punter Justin Vogel, and punt/kick returner Stacy Coley) who even finished among the top five vote-getters at their respective positions. In a characteristically bottlenecked race in the Coastal, Miami is again projected to land somewhere near the bottom, an outcome that would almost certainly lead to Golden getting the boot.

The difference this time around, though, is that the quarterback is now the sole beacon of optimism amid the tumult. At 19, Kaaya is as close as the Hurricanes have to a proven commodity on the field, and he’s made every effort this offseason to establish himself as both a vocal leader in the locker room and an ambassador to media and fans. He’s been the guy on the podium during media days, and the guy talking to local radio to insist that the team has undergone a “complete culture change” since last year’s skid across the finish line. He was the guy surrounded by microphones on the first day of preseason camp, describing how much happier everyone was to be there than they were at the same time last year. He was the guy explaining to reporters last month exactly when and where the team turned the corner this spring, when the majority of players decided they’d had enough of enduring punishment runs to pay for a small handful of teammates’ repeated mistakes:

“The last straw is when the whole team got out there,” Kaaya said. “It clicked and we said, ‘We’ve had enough. When is it going to stop? We can’t keep having this happen.’ That morning we came together, right before spring break.

“Ever since, it’s been different. [Rules violations have] been cut down tremendously. This summer, we had no major issues. That’s huge for our team. Coach Golden is not having any more nonsense any more. It’s all about business. Team leaders are holding guys accountable. We didn’t want to focus on all the distractions holding Miami back. This team is clean.”

Of course, listening to disappointing outfits tout their newfound discipline and unity is an obligatory summer trope. But the starting quarterback rarely describes the process as if it were a kind of exorcism.

In at least one sense, though, with a decade of inconsistency and diminishing returns continuing to loom over the position like a storm cloud, a purge is exactly what Miami fans want to see. Based strictly on his body of work as a freshman, Kaaya has plenty of room to grow against the better defenses on the schedule6 and all of the physical tools necessary to turn that potential into reality. Based on the reports out of spring camp, he’s embraced the opportunity to emerge as the face of the program and has won over his teammates in the process. And while this is the time of year that hope springs eternal, when reality sets in as the calendar turns to October and the Hurricanes have to play Florida State, Virginia Tech, and Clemson in a span of 15 days, their precocious quarterback will be the only realistic hope they have.