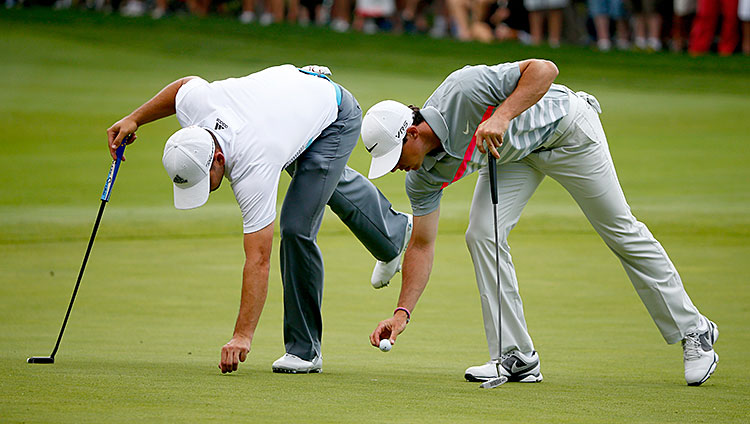 I wouldn’t have known that Rory McIlroy and Sergio Garcia ate lunch together before the final round of the WGC-Bridgestone on Sunday if not for the nice Canadian man who was staying in the other bedroom at my Airbnb house in Richfield, Ohio. He and his wife had come down from Ontario to see their first golf tournament, and on Saturday night he told me the highlight of his day was watching Jason Dufner give his extremely expensive Scotty Cameron putter to a child.

Remarkable, I thought. You see a lot of autographed balls given away, but a putter represents a new standard in post-round generosity. But the man’s story wasn’t finished. Dufner, he insisted, with a look of wide-eyed astonishment, gave the putter away on the back nine. In the middle of his round.

This sounded like nonsense, but three corroborating references on Twitter compelled a follow-up. After his final-round 77, I tracked Dufner to the locker room, where he sat in a leather chair looking miserable.

“Jason,” I said, “I heard a story that you gave your putter away to a kid yesterday. I wanted to make sure it was true.”

I did the math — eight holes. Dufner had always been a bit rough on the greens, but I failed to see how this would help.

“What did you putt with?”

He declined to elaborate, and that’s when I saw Rory and Sergio breaking bread in the small dining area, just two hours before they would tee off together in the final group. Sergio held a three-shot lead — a reversal of sorts from the British Open, where Rory led by a more robust six strokes over Garcia heading into Sunday before winning his third major championship. Now the tables were turned, and despite their well-known friendship, it felt odd to see the competitors chowing down in the moments before battle amid a coterie of agents and caddies.

Rory was his imperturbable self, smiling at the jokes, giving friendly nods, and otherwise staying quiet. Sergio, on the other hand, was roaring with laughter, speaking quickly and at volume about topics I couldn’t quite hear without disguising myself as a potted plant and sneaking up behind them. As an extrovert who tends to get gabby in moments of tension, though, I heard enough to recognize a kindred soul.

The pattern continued on the range; Rory was off on his own with his caddie and father, but with Sergio, it was like he had to talk, in order to prove to himself and everyone else that this was just like any other day, and he was at peace.

Sergio was 3-for-11 in his career at closing 54-hole leads. Now he’s 3-for-12. He also has 64 major starts without a win, which is high on the all-time list, and carries a well-earned reputation for breaking down when the pressure is highest.

In the last couple of weeks, though, there have been a litany of articles trumpeting his newfound happiness, chalked up to the wisdom that comes with age, and his engagement to a German named Katharina Boehm. This comfort, the theory goes, explains his recent success and his solid play in the final round of the British Open.

There’s truth there. But a fellow reporter, who is almost always right, had an interesting thought while we walked the course Sunday: “He had absolutely no shot at the British, and the moment it became a remote possibility, he dumped two straight shots in the bunker on 15.”

The repeated insistence on Garcia’s happiness, too, reminded me of the 2012 Ryder Cup, when the American team conducted a propaganda campaign in the prematch press conferences, telling everyone who would listen that Brandt Snedeker, who had made a habit of collapsing anytime he even sniffed first place in a major, was “extremely competitive.” Again, probably true. But this intense yearning didn’t stop him from folding again in the Ryder Cup. It turns out that not choking takes more than a sincere desire not to choke.

A strong start in the final round at WGC-Bridgestone was imperative for Sergio if he wanted to show he was capable of defending a three-shot advantage against the best golfer in the world. Instead, he stumbled out to an awful, tentative start. By the third hole, Rory had made three consecutive birdies to snatch a one-shot lead in what can only be called a complete disaster for the Spaniard. There was a pond just in front of the third hole, and when Garcia’s short par putt slid by, I wondered if he might jump in. To his credit, he summoned a bit of resilience and managed to fight back to a tie by the 10th hole.

Unfortunately for Sergio, there isn’t a frozen corner in hell where he would beat Rory on the back nine of a prestigious tournament without a healthy lead and a bucket full of beta-blockers. Neither of which were available to him in Akron.

Two hours later, Rory McIlroy became the no. 1 golfer in the world. 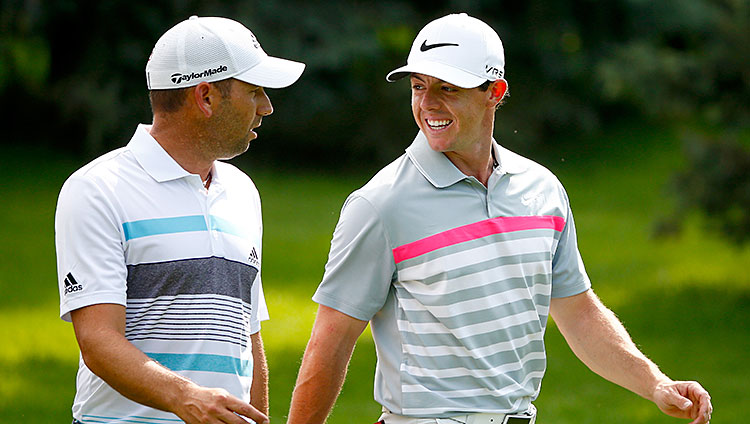 Now to the important part. After his win at Hoylake, Rory told me he had watched Jackass Number Two the night before his final round. Because I’m dedicated to asking the tough questions, I sidled up after his press conference, while he signed an array of flags, hats, and white boxes labeled “Bridgestone,” and one rogue fathead bearing his image. What had he watched the night before his second straight victory? What sort of film is fit to follow Jackass Number Two??

“Last night. What was it last night … I was flipping through channels, there was a bit of … what was it …”

A pause. The flash of memory. And then something a bit more abashed.