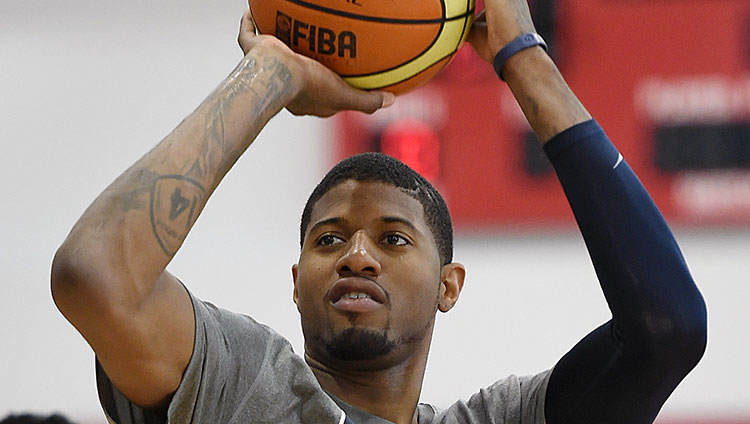 The unpredictability of sports is what makes watching them so memorable. At its worst, though, unpredictability means cruelty. One moment, everything is normal. The next, you’re recoiling from the very thing that was just entertaining you.

What made the Paul George injury so cruel was the way it came from the kind of on-court action that occurs a dozen times or more in an average basketball game. It immediately joined the ranks of similarly stomach-churning scenes that live in popular memory as a kind of sports version of Faces of Death — the kind of thing you mention having seen as a way to warn off anyone who hasn’t. It’s a cruel injury, because its severity forces a reevaluation of what kind of game matters — a scrimmage, versus international play, versus the regular season — when the truth is that no game really matters when stacked against a person’s health and quality of life.

George fractured his tibia and fibula, and will likely be out for at least the next season. This is a hammer blow for the Indiana Pacers and their fans, who, in the wake of Lance Stephenson’s move to Charlotte and now George’s injury, have to face replacing their most dangerous ball handler, their leading scorer, their two best two-way players, and a combined 5,650 minutes of production. This, after one of the most spectacular regular-season free falls since Icarus.

There’s a line in the song “These Days,” written by Jackson Browne but most famously sung by Nico. It’s one of those lines that perfectly captures something you had never been able to vocalize. “Don’t confront me with my failures — I had not forgotten them.” I mention this because I’ve always thought that one of the most profoundly strange aspects of being a professional athlete — apart from the piles of money and adulation of strangers for playing essentially children’s games and, really, everything else — must be having some of the worst moments of your life be part of the popular culture.

An athlete’s capacity to forget is as important as their ability to recall. Brian Windhorst’s recent profile of LeBron James’s basketball memory talks about how LeBron’s recall of his disastrous 2007 postseason haunted him even six years later, as the Heat were playing the Spurs in the Finals. Paul George is 24 with an otherwise clean injury history, and all signs, second- and thirdhand as they are, point to a likely full physical recovery.

The hardest part, though, will be forgetting it ever happened.

During an away game versus Stoke City (a team known at the time for its physical-on-the-edge-of-dirty style) in February 2010, Potters defender Ryan Shawcross came scything into a tackle, too high, and very late, fracturing Ramsey’s leg in two places, and leaving it looking, below the knee, like an open safety pin. The players on the pitch were visibly distraught, and several seemed as if they might actually be ill. Or that’s how I remember it. I refuse to ever watch the YouTube video. Shawcross, for his part, wept as he walked off the field. 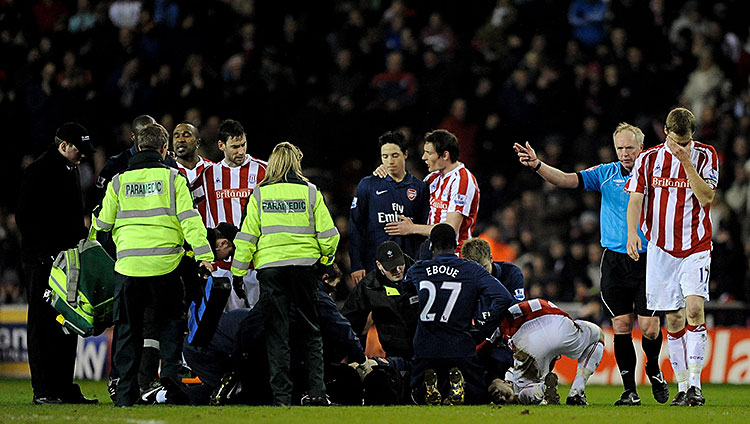 Within nine months, Ramsey was back on the pitch with the reserves. After a year on loan, he returned to Arsenal’s first team at the end of the 2010-11 season, and would, for most of the next season, look like a ghost of the player he once was. Or maybe a player afraid of ghosts. He shied away from contact, seemingly all too aware of the bone-snapping dangers populating the game around him. The following two seasons saw Ramsey submit one inconsistent, error-filled performance after another, scoring so infrequently that the joke went that each time a shot of his managed to grope its way to the back of the net, a famous person (Bin Laden, Steve Jobs, Muammar Gaddafi) died. He was booed at the Emirates, a not-small segment of Arsenal fans wanted him sold, and members of the intelligentsia agreed that, yes, those fans were right. 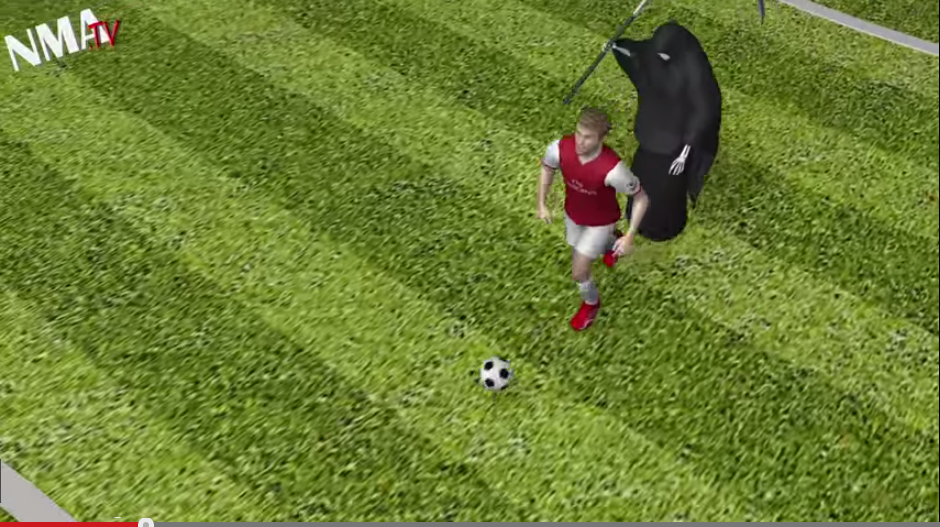 All of which became the background story to Ramsey’s 2013-14 campaign, a season that tasted the celebratory quality of champagne finally bursting past its cork: 13 goals (10 of those in the league, two in the Champions League, and one in the FA Cup), nine assists, and 99 tackles (the second most on the team); named Arsenal’s player of the month four months in a row; put on the short list for the Professional Footballers’ Association’s Young Player of the Year award; scored the winning goal in stoppage time of the FA Cup final, ending the club’s nine-year trophy drought.

“The mental side was the biggest factor. It might take just a few games to get back into it physically, but mentally it takes a lot longer to overcome what I went through. It definitely took a couple of years; to go into tackles full-hearted. Things go through your mind on the pitch,” Ramsey said in December 2013.

The more you think about sports, and the older you get, the harder it is to be moved by them. You start out building heroes to worship and you eventually arrive at a place where it’s obvious that the real moves are pulled off by guys in offices pushing paper around a desk. Losses are easier to shake off until it’s a player suddenly losing his whole season in the time it takes to come down from a jump. Performances become less a personal affront and more obviously just the result of people trying to do their jobs as best they can.

And so, I am a bit weirded out by how happy I am for Aaron Ramsey. The guy is a freaking millionaire, and I am a full-grown adult with broader life concerns than people running around and kicking a ball on Saturday mornings. But a person, a kid really, staring down some metaphorical mortality, and coming all the way back, says something that I can’t really verbalize, in the same way the line from “These Days” does.

Similarly, I was surprised by how bothered I am by Paul George’s injury. One day, I hope to watch him forget it ever happened.

About Last Weekend: Yanks Slug One Out