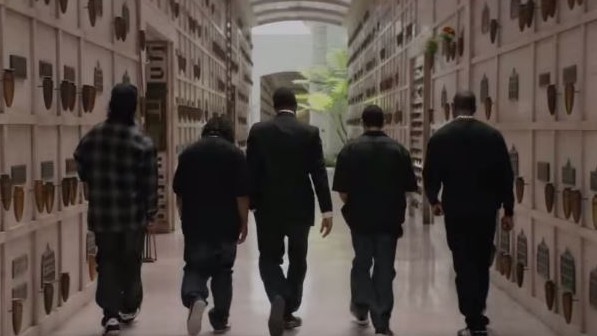 Just a week after flaming out at the hands of Reed Richards and the Human Torch, the box office came roaring back. Considering how deep into August we are — and no one projected this — the top 12 films managed to tick up 4 percent over 2014. That’s really impressive when you remember that last year’s record-setting August had Guardians of the Galaxy and Teenage Mutant Ninja Turtles tag-teaming the box office.

But you know what? Forget the projections. Universal Studios, which has put together a slate of successes that had to require some wholesale soul-bartering, unleashed a parting knockout shot at the box office. And what a shot it was. This weekend’s successes say a lot about the shifting sands of moviegoing these days, and none more than this weekend’s undisputed champion, from the city of Compton.

Obviously, if you read headlines, have an Internet connection, and/or just fondly remember your parents ushering you past the N.W.A section at Tower Records back in the day, you knew Straight Outta Compton was about to tap a nerve. But no one could’ve known it would hit it this deep:  F. Gary Gray’s much-buzzed-about biopic took the top spot this weekend with $56.1 million on 2,757 screens. That’s a genuine stunner: Even the frothiest experts figured $40 million tops, considering the Biggie biopic Notorious opened to $20.5 million in 2009; hell, that beats Eminem’s not-quite-a-biopic 8 Mile, which topped out at $51.2 million. But here are N.W.A putting up recent Marvel numbers for a movie about the birth of gangster rap.1 To give you some perspective, Compton’s per-screen average of $20,345 would be considered phenomenal for an art film opening in a handful of theaters.2 That’s not just the biggest August bow for an R-rated film, that’s the sixth-biggest August opening weekend ever. And who could’ve ever imagined writing this sentence: Straight Outta Compton is the best opening for a musical biopic. The icing on the cake: Compton cost a mere $29 million to make.

Who gets the bragging rights? Well, there’s plenty to go around. Obviously, Universal has already put together a box office year for the ages, and Straight Outta Compton notches the studio’s sixth no. 1 opener of the year. With Straight Outta Compton, Universal could release nothing else this year but a two-hour video of the staff taking selfies and it would still break Warner Bros.’ $2.1 billion record for domestic box office. By the way, that’s a record set in December 2009, which Universal will break in August. On top of Jurassic World, Furious 7, Minions, Pitch Perfect 2, and 50 Shades of Grey, it’s safe to say Universal knows how to market a hit. For starters, cut a good trailer and run it in front of the fifth-biggest-grossing film of all time (Furious 7). Then pick a release date (the August doldrums) when audiences will be aching for something new. Last, add in a meme as garnish: The Straight Outta Somewhere site had 6 million downloads as of August 13. And Dr. Dre syncing the release of his new album, Compton, didn’t hurt, nor did Ice Cube’s 2.4 million Twitter followers.

But the bigger lesson here is that Universal understood Straight Outta Compton’s cultural cachet and acted accordingly: It didn’t pigeonhole it as just an “urban movie,” but instead tapped into the zeitgeist and let it cross over.3 The studio took a movie that spoke to the moment and treated it like an event film. Too often Hollywood functions on fear and repetition, trying to replicate past success rather than looking to what’s next. Universal, however, acted fearlessly and understood that audiences evolve: We get saturated when everyone copies a winning strategy (like a Marvel-style “universe”) and force-feeds it to us over and over.  A true “event” film doesn’t come only from comic books, rebooted franchises, or needless remakes. It comes from anticipating the cultural moment, which is to say it can come from anywhere. This weekend, it came from Compton.

Speaking of too much of a good thing: Given Mission: Impossible, Kingsman: The Secret Service, and Spy, 2015 has been pretty kind to the secret agent set. Unfortunately, The Man From U.N.C.L.E. found itself without a chair once the music stopped: Guy Ritchie’s hyper-stylish action-adventure remake of a mostly forgotten TV show couldn’t even dethrone Ethan Hunt in his third week, managing only $13.5 million in 3,638 theaters for third place. On a (at least) $75 million budget, that makes for a not-so-swinging ’60s. Now, that’s not quite a Fantastic Four burnout — by the way, the latter is still a catastrophe, dropping almost 69 percent in its godforsaken second weekend — but it’s nowhere near what Ritchie or Warner Bros. were hoping. Despite a relatively respectable 67 percent on the Tomatometer, the project’s long shelf life probably didn’t help: Tom Cruise was once attached, and Steven Soderbergh has twice retired from filmmaking since he was first involved. On the slightly bright side, U.N.C.L.E. pulled in $12 million overseas; on the not-so-bright side, Warner Bros. owns this baby outright, with no co-financers to absorb some of the loss. To paraphrase the words of Marsellus Wallace, some projects just don’t age like wine.

Otherwise, it was a good weekend for the leftovers. Mission: Impossible has been hanging in there with another second-place finish at $17 million. It has also pulled in $235,000,000 abroad for a global total of $373,437,000 — pretty good for a 20-year-old franchise. Meanwhile, last-weekend success The Gift dropped less than 45 percent, adding $6.5 million, for a grand domestic total of $23 million: Again, because it’s a cut-rate Jason Blum movie, that’s all gravy. Even last week’s loser, Ricki and the Flash, held firm, with a 31 percent drop. I guess you can never underestimate the appeal of an air-conditioned theater when it comes to the dog days of August.