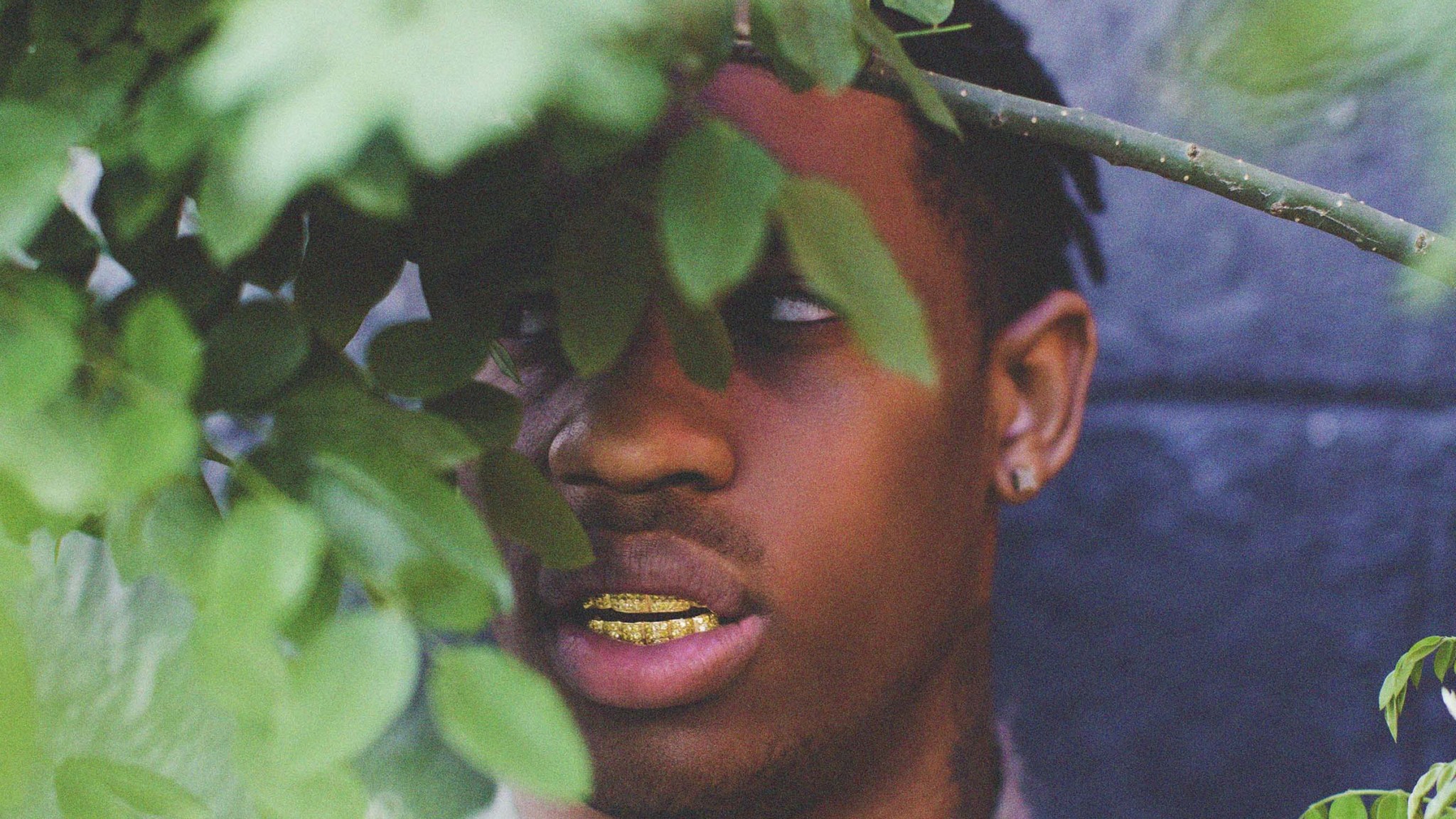 It’s generally a bad idea to defraud your parents. Every once in a while, though, it ends up being totally justified. Travi$ Scott was a sophomore at the University of Texas getting money from his mom for books and food when he first dipped out to New York City, using the scholastic funding instead to support himself while he tried to break through with his music. While his folks imagined him studiously note-taking during, say, Introduction to Asian Philosophy, Travi$ was shooting videos, recording tracks, scrounging together whatever industry connections he could, and sleeping in his friend’s car.

It worked out, and fast: His early song “Lights (Love Sick)” caught the attention of Kanye (through Travi$’s now manager, Anthony Kilhoffer, an engineer for ’Ye) and T.I., who’d eventually slot him into the Grand Hustle imprint. He’d also end up getting a production deal with ’Ye, working first on the GOOD Music crew album Cruel Summer, then the score for the would-be revolutionary, sadly never-released Cruel Summer movie, and then the quickly hagiographied Yeezus sessions.

Unlike Justin Vernon or TNGHT’s Hudson Mohawke (or even Evian Christ, who at least had his mixtape Kings and Them buzzing at the time), Travi$ was a complete unknown. But a month before Yeezus came out and rewired everyone’s neural circuits, Travi$’s first proper release, Owl Pharaoh, dropped, and suggested a clear antecedent for all of those unholy hellscape jams that had appeared to come, fully formed, out of Kanye’s fever dreams. Asked about the suggestion that he hadn’t just helped produce but had actually influenced Yeezus, Travi$ laughs. Too much. “We created a sound with Yeezus and shit. It’s ill to follow in that path and just go — excel.”

Travi$, still just 22 years old, is in New York for a week to “catch a feel,” he says: His new album, Days Before Rodeo, has just been released, and he’s running around doing press and partying and figuring out what the hell is going on and what comes next.

We’re at Tao, the cheesy Midtown Asian fusion spot known for its 30-foot Buddha and forever popular with moneyed tourists and, like, half the Giants’ O-line. Downstairs, an extremely dapper European couple in their late thirties stop making out long enough to complain to the waitress about the make of the wine glasses, and groups of squealing teens and moms, in corresponding floral jumpsuits, pour out of massive limos that have come straight from the finer culs-de-sac of Long Island. Upstairs, Travi$ and his buddies — including his DJ, Chase B, who he’s known since they were kids in the Houston suburb of Missouri City, Texas — split plates of orange chicken and white rice. And it’s not until the end of the interview that I realize Travi$ has been quietly consuming Shirley Temples the entire time.

You thinking of doing any shows in New York this week?

I think the next show I should do in New York should be like the illest show ever. I wanna hold out on shows until I can do it perfectly. It’s coming together. Stage design. Ill visual shit. I’m putting together, like, a tour.

It’s like my album: Days Before Rodeo. It’s kind of a Southern drawl type vibe.

Right, yeah. Like the horse riding in the “Don’t Play” video. That comes from growing up in the south?

Click here for all of our interviews with fascinating people from the worlds of sports and pop culture.
Yeah, you know, that’s where I’m from. So like that whole Southern vibe has always been a part of me. I just wanna highlight the culture. But it’s a new culture now. It’s not all about lean and shit. It’s, like, kids just like me. I want people to know that.

So you grew up riding horses?

I mean, hell no! I probably drove more like Benzes or Audis — or, like, a hooptie — than a fucking horse. But people have horses on some swag shit. That was like on some rich shit. You got horses because you got bread.

Shit, high school was on some sports shit. I was always running around doing dumb shit. Hyper activities. I was always into music, so I did that. I was smart. I fucked with school. I fuck with education. But I always had an urgency to do something awesome. When you young, you looking at n​-​-​-​-​- like Lil Bow Wow and shit like, balling.

You wanted to be 14 with the chains and stuff?

So how old were you when you started with music?

How old were you guys when you met? In high school?

Chase B: Nah, like 9, 10 years old. We lived right down the street from each other. Where we from, Missouri City, it’s  a weird community because it’s really diverse. So a young black kid in Texas in general, you relate to that person. Ya’ll go through that same thing. The whole Friday Night Lights shit, that’s probably the realest thing. Going to football games, we’d be all there fucking around, drinking. Shit used to go down in cars. You always had to drive.

Travi$: It’s Texas, man. So you got open fields, bonfires, shit like that. How Mo City is, man, it’s like middle class but you got n​-​-​-​-​- that be making dumb decisions. One of my homies, man, I talk about it on the album and shit: He led his team to state championship in basketball. That n​-​-​-​- definitely probably gon’ hit the NBA and shit. And that summer he and his homey tried to rob some n​-​-​-​-, and the n​-​-​-​- ended up dying. So he’s in jail. But he has a younger brother that’s raw as fuck. He plays for St. John’s and shit. They come from a good background and shit. So it’s like, decisions, man.

You go through the same shit like any other place. The difficulty we find is trying to find a way to get out of that situation, without having to follow the system. Not, “I gotta get a job, I gotta work with somebody.” There’s people like me that’s got vision.

So you alway felt this crazy push to get out of Texas?

It’s like a rush, man. You grow up in a small community: There’s no outlet like New York or L.A.

Things happened for you quickly. Was it ever tough to process that?

I feel like mad shit was happening while I was learning. I was working with Jay Z while I was still learning how to be who I was about to become. Still, to this day — I’m just soaking in the information.

Your real name is Jacques Webster.1 How’d you get to Travi$?

Your family is well educated, right?

Oh man. They must be going nuts over you.

They blasting it! They all on the Internet and shit. They’re like, “Oh man!” My sister was the one who told me, “Oh, Drake tweeted your shit!” She’s like, “Oh, you trending!” She keeps me posted on my shit.

Did you get a chance to pay your mom back for the school money?

I mean, kinda. Not like in a lump sum! But yeah, definitely. Gotta hold my moms down.

People will still throw around the “Kanye protégé” title for you. Are you cool with that?

Man, it’s ill. ’Ye told me all the time, he wants me to carry the music through time. He trusts me with the sound and shit.

Anyone else you’d wanna work with?

Yeah, like M.I.A. James Blake is a real good friend of mine. He’s real different than what you thinks. He’s super turned up. Not all, “Arrghh!” But he has fun. It’s tight. We hung out in London one time. I did this show at [the club] XOYO. Craziest shit.

Do you ever feel like you have to turn on the “rapper” mentality when people approach you?

I mean, I’m one person all the time. I’m La Flame at all times. That at times can be bad, at times can be good. I’m at a point now where I can just control what I do. There’s a time and place for certain things. When I was young, that was my [problem]. I used to just — whooooo. [Laughs.] Go crazy.

I think it’s rad that you feel totally comfortable talking about the diversity and the middle-class status of where you come from. A lot of rappers wouldn’t be as comfortable.

My grandma, she stay in the hood. I got family that live in the hood. That ain’t tight. That ain’t no type of place to claim, or wanna be from. You know what I’m saying? You put on for your hood, in the right way. There’s mad kids like me. Creative. It’s not about your location, it’s your mind.

So what’s next — do you have a five-year plan?

I don’t write shit down. That’s the problem. I don’t really have an agenda. But I have a couple of points. Inspire. Create an experience. I’ll be satisfied when everybody’s straight, and the vision’s coming alive. And then it’s more kids like me being highlighted. I’m ready to go right now.