The End of an ‘Empire’: HBO’s Onetime Hope for the Future Sputters to Its Conclusion 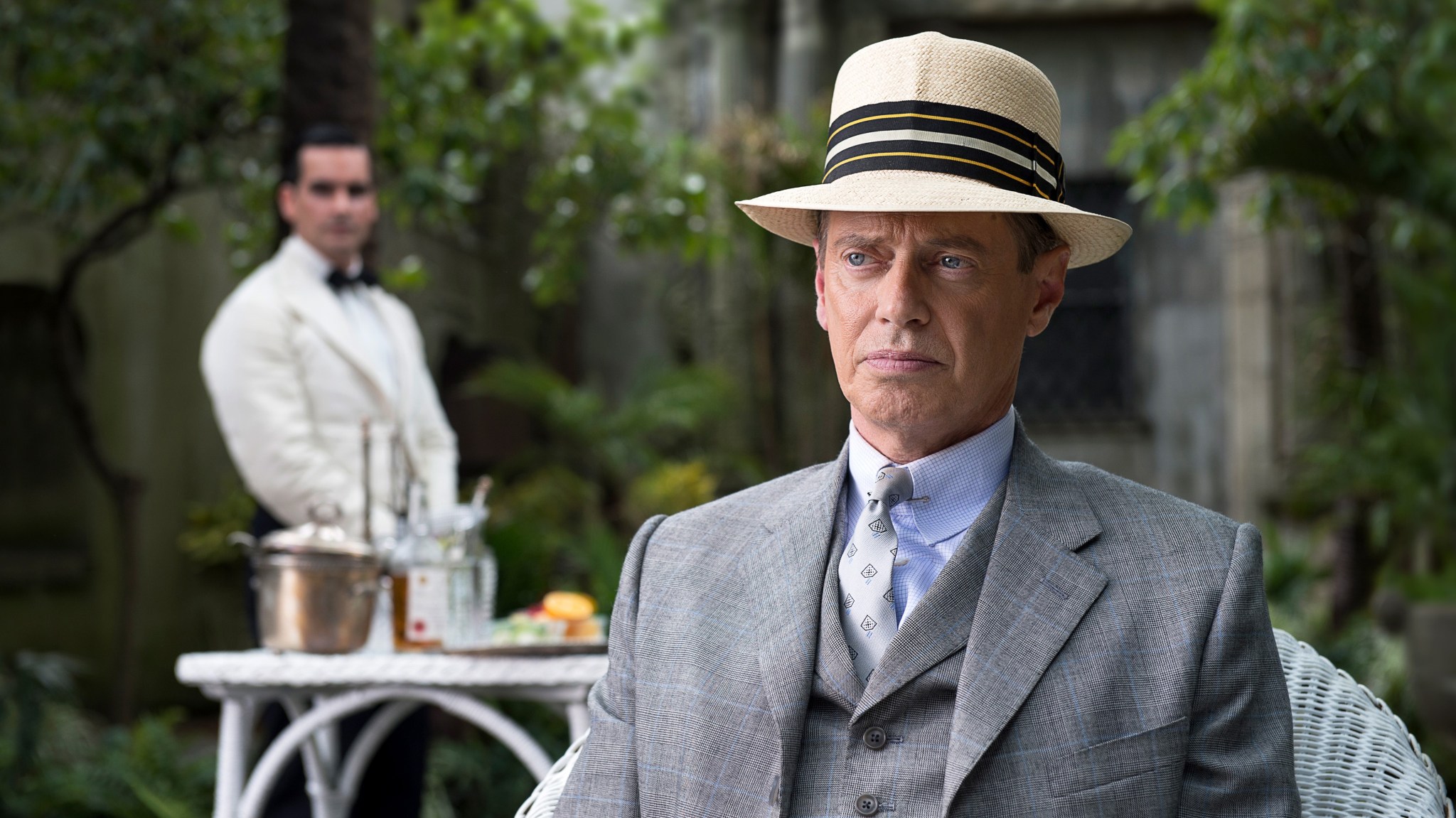 “Year in, year out: different dogs, same fucking bone.” It’s Nucky Thompson who says these words, early in the fifth season of Boardwalk Empire, but it’s not hard to imagine an HBO subscriber expressing something similar. Since premiering with extravagant fanfare in 2010, Boardwalk Empire, which returns this Sunday at 9 p.m. ET, has burned through tens of millions of dollars and dozens of remarkable performances in search of fresh meat. It’s never been anything less than gorgeous to look at, but, with one notable exception, it’s rarely been great to watch. Crippled from the start by its limited setting and hampered further by the unplanned loss of its second lead,1 Boardwalk spent the majority of its existence collecting characters like marbles and wandering farther and farther away from its Atlantic City home: first to New York and Chicago and, more recently, to Maryland and Florida. (The new season stretches the map even farther, to Cuba.) Many series have been able to overcome bumpy beginnings, but Boardwalk has persevered despite the hole in its heart: It’s a show built around a hero with nothing much to do living in a town in which nothing much happens.

You can be forgiven if you’re experiencing déjà vu. I wrote something similar this time last year — different dogs, same fucking bone to pick — before declaring myself done with the show for good. This proved to be a mistake. What was both remarkable and encouraging about the second half of Boardwalk Empire‘s fourth season was the way show creator Terence Winter seemed to explicitly acknowledge and address his show’s shortcomings. Beginning with the lyrical and focused fifth episode, the Eddie-dispatching “Erlkönig,” Boardwalk finally appeared willing to roll up the sleeves of its bespoke suit and embrace the unabashed gangster show it’s always been. It helped that Steve Buscemi’s draggy Nucky spent much of the season in exile. Never one for deep layers of subtlety, Winter stashed him in an abandoned hotel called “The Albatross” (!) and devoted the bulk of his attention to the livelier personalities who had been thriving on the fringes, notably Stephen Graham’s manic Al Capone, Shea Whigham’s mournful Eli Thompson, and Richard Harrow, the scarred hit man played with melancholic grace by Jack Huston. Best of all, Winter elevated Michael Kenneth Williams’s fascinating Chalky White from supporting character to lead and then provided him with a foil worthy of the show’s often unrealized champagne dreams. As the silver-tongued Dr. Narcisse, Jeffrey Wright was a spellbinding contradiction, an activist and con man who preached black self-empowerment but earned his pulpit through heroin and prostitution.

Unlike so many of Boardwalk‘s other conflicts — between powerful men and their wobbly morality, between greed and bullets, between killers and their buzzkill wives — the collision of Chalky and Narcisse felt not only new but almost entirely unknown. For all the hosannas about how the recent Golden Age of TV has demonstrated the medium’s ability to tell nearly any type of story, just whose stories it told has remained frustratingly static. Of all the universally hailed Hall of Fame shows from the past decade, only The Wire demonstrated more than a passing interest in the lives of African American characters. The meatballs of The Sopranos — where Winter made his bones — were loudly, often proudly racist. On Breaking Bad, the nature of Walter’s sheltered, pre-Heisenberg life led him to encounter minorities primarily as criminal, often scary others. And Mad Men has peered down at the civil rights struggle of the ’60s from the relative safety of its characters’ midtown ivory tower. To be clear, I don’t think that any of these shows had any sort of creative obligation to be more inclusive — in fact, the intense specificity of their storytelling is part of what made them great. But I do consider it a failure of imagination on the part of the studios and networks that have, consciously or not, taken a wide-open field and erected a very familiar set of fences.2 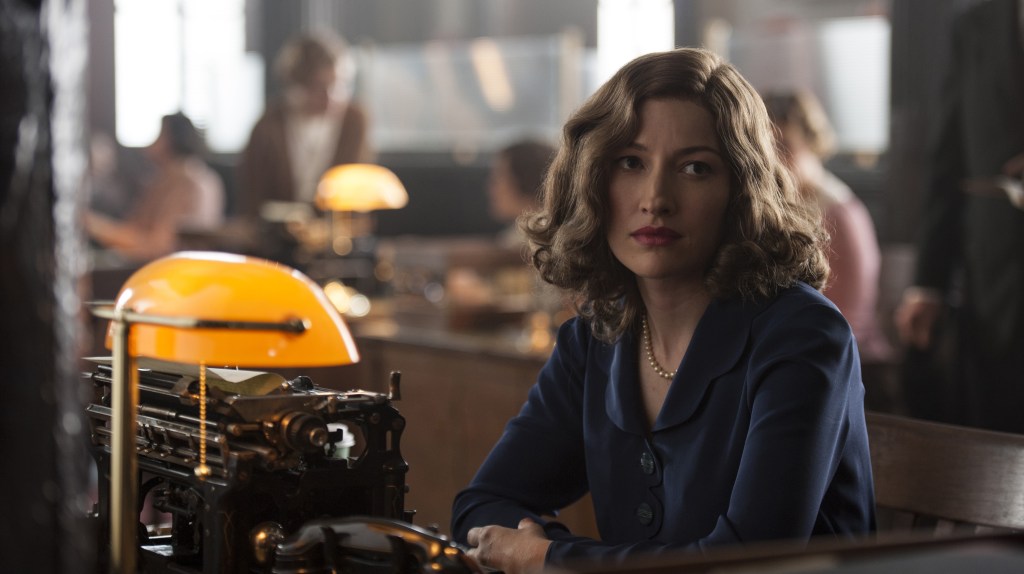 Even recent, well-meaning cable dramas have stumbled in this regard. Showtime’s Masters of Sex has attempted to link Masters and Johnson’s outcast status as sex researchers with the history of racial unrest in St. Louis with often clumsy results. André Holland smolders on Cinemax’s The Knick as Dr. Algernon Edwards, a brilliant black physician. So it’s disheartening when, on occasion, his role in the A story is to allow Clive Owen’s Dr. Thackery a chance to play the white knight. And while Wendell Pierce is a joy in any role (and I make it a habit never to begrudge an actor a paycheck), it’s tough to see him go from the complicated humanity of The Wire and Treme to playing straight man to Jon Voight on Ray Donovan. What all of these programs have in common is that they present the African American experience through a predominantly white lens. Black characters, regardless of status, are generally surfaces upon which the white leads can project their own hopes and fears. To put it another way, they come into our homes. But TV viewers rarely get the chance to cross the threshold into theirs.

It’s this disconnect that made the clash between Chalky and Narcisse feel so essential and, in a small way, radical. That both characters could be self-made men with such strikingly different results suggested a diversity within the African American community that is rarely expressed on Sunday-night television. Though he’ll always be remembered as Omar Little, Williams did the best work of his career last year on Boardwalk Empire. Chalky wasn’t just an interloper in Nucky’s world — he was often an interloper in his own. Williams radiated the same resentment, fury, and shame when seated at the dinner table with his very proper, well-educated family that he did when face-to-face with the smooth-talking Narcisse. And in their scenes together, Chalky and Narcisse easily passed what could glibly be called a racial Bechdel test: Their conversations didn’t always concern white characters; their agendas and their eventually bloody animus didn’t, either. Rather, the diversity of their backgrounds and the intensity of their friction spoke to the deeper, enduring reality of race in this country. That Winter3 and his deputy, Howard Korder, were able to express this so well made other series — many of which use their period settings as an excuse for their homogeneity4 — look all the more lazy by comparison.

The thought of an ongoing struggle between Chalky and Narcisse made me optimistic about the future of Boardwalk Empire for the first time since it premiered. By inverting the typical hierarchy of gangster stories, Winter seemed to have finally found a fresh gear for a series that always seemed stuck in neutral. But it was not to be. The run of eight episodes that begin airing this weekend will be Boardwalk‘s last. And while I wish I could say that the final season focuses on the power dynamic between the fallen spokesman of black Atlantic City and the slick mayor of Harlem, it doesn’t. Though both Chalky and Narcisse are present and engaging in the first three hours of Boardwalk‘s fifth season — and I have no doubt that their final reckoning, when it arrives, will be tremendous and earned — they are decidedly back on the margins. With time at a premium and the misbegotten idea of legacy at his back,5 Winter has decided that Boardwalk Empire will die as it (mostly) lived: as the legend of Nucky Thompson, a protagonist who just spent a successful year being Wally Pipped out of his own story.

For viewers like me, who were impressed by Boardwalk‘s sudden turn away from the burdens of being a morally complicated white male, the way this plays out is discouraging — though it’s not without its moments, especially the ones involving Vincent Piazza’s Lucky Luciano. Throughout Buscemi glowers his very best glower, but his Nucky remains a cipher. What does he actually care about? And why should we care? Midway through the third episode, he finally declares his long-term intentions — like all of cable’s difficult men, he wants “to leave something behind,” to which I say blerg. Perhaps realizing the challenges of building a memorable meal around such a wet noodle, Winter devotes great chunks of the new season to an extended, recurring flashback to Nucky’s aspirational 19th-century boyhood. These great clunking scenes are not only dull and unnecessary6 (although not, perhaps, to the actor doing an extended Younger Dabney Coleman impression), they also draw unwanted attention to Boardwalk‘s greatest weakness. Empathy can’t be retconned. It has to be earned. 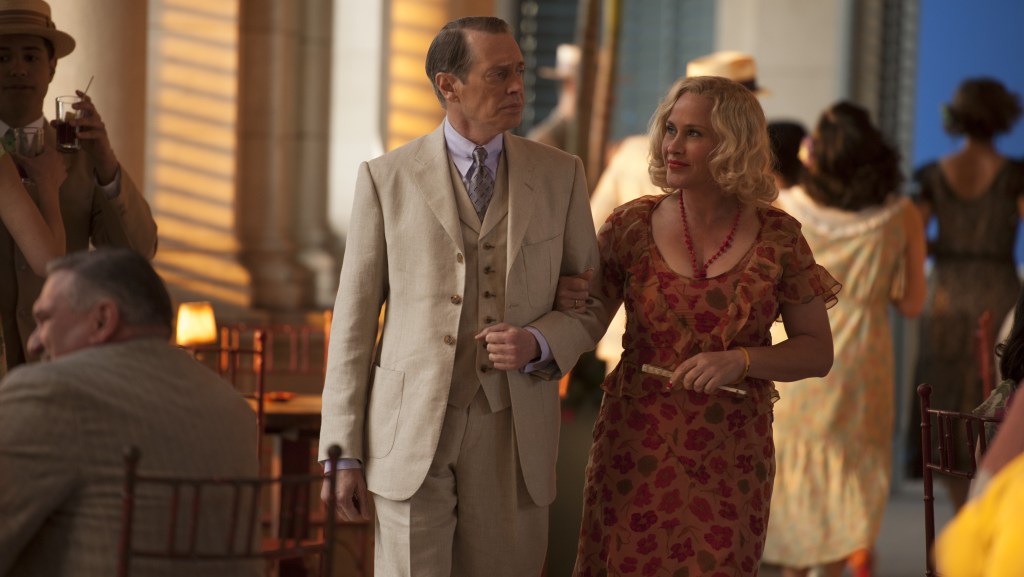 This isn’t to suggest that all the lessons from the Nucky-lite season have been lost. There’s a ruthlessness to Boardwalk now that I quite admire. With only eight hours remaining, Winter has pushed fast-forward on Prohibition, jumping us ahead seven years. This allows a certain symmetry with the show’s first season: Back then, Nucky and his criminal peers were perfectly positioned to win the war on alcohol; now they are endeavoring to win the peace. (Nucky’s attempt to secure a legal contract to distribute Bacardi puts him in contact with the head of a certain soon-to-be-dynastic Boston family, well played by The Carrie Diaries’ Matt Letscher.) Never mind that no character other than Chalky appears to have aged or, really, experienced anything of note in the intervening years. In this case, I appreciate that Winter isn’t above putting his thumb on the scales to get the result he wants. Despite the acrobatics it took to unite them in Capone’s Chicago, Whigham’s Eli and Michael Shannon’s somehow-still-on-this-show Van Alden make an engaging pair. And the knot that Winter uses to ensnare the long-suffering Margaret Thompson back into the plot is downright ingenious. (Though one wonders if actress Kelly Macdonald, who hasn’t had anything to do but purse her lips for three seasons, might have preferred to have been cut loose.)

I’ve been wrong about Boardwalk Empire seasons before. They all tend to improve as they pick up steam; Winter and Korder are excellent storytellers even when the story is lacking. Still, I don’t think I’m wrong about Boardwalk Empire itself, a show that aspired to be top-shelf and never quite seemed able to settle for life on the rail. As the adventures of Young Nucky remind us, the allure of the underworld can often be due to the stability it provides. Knowing you’ll wind up dead or in jail can be a comfort if the alternative is going nowhere. And so it’s no real surprise that, in the end, Boardwalk should turn away from the uncharted territory sketched out last year and return to mob business as usual. In the next few weeks, money is counted, liquor is poured, and women’s bodies are either pumped or pumped full of lead. “Kingdoms rise, kingdoms fall,” one impeccably suited gangster says to another with a shrug. And empires? They slowly fade away.