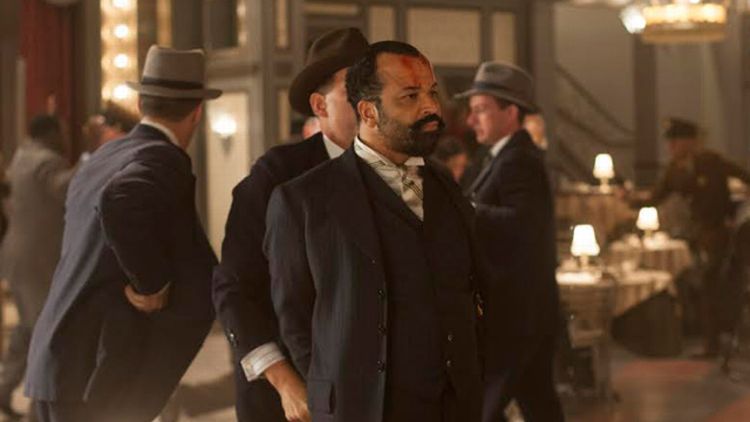 I bailed on Boardwalk Empire’s fourth season after the fourth episode. I’d simply had my fill of the meandering plots and cartoonish violence, the constant attempt to ferment something meaningful out of unrewarding chaff. Thanks to the largesse of HBO, the series was blessed with outrageous talent, unparalleled production design, and a budget worthy of Andrew Mellon — the real one, not the version James Cromwell is occasionally tasked to play between visits to the beard barber. And yet, beneath the finery, Boardwalk always struck me as empty and inert. It was bootleg rail whiskey being passed around in a gorgeous, single-malt bottle. It tasted good for a while but the subsequent hangover was hardly worth it.

Turns out, I quit too soon. After tearing through the subsequent eight episodes like a Capone in a flower shop, I can safely say the season of Boardwalk Empire that ended last night was, by far, its best. At long last the show seems to have found a way to reconcile its penthouse ambition with its pulpy, dime store heart. After years of being wonderful to look at, there’s finally something to see. The fifth episode, “Erlkönig,” was where the tide shifted for me: It was an unsettling, strangely beautiful hour devoted to the slow, deliberate cracking of a man’s pride. (I’m still thinking about that ruined piano in Agent Knox’s improvised interrogation room.) As Nucky’s German valet Eddie, Anthony Laciura, an opera singer by trade, delivered a small jewel of a performance: He’d rather walk out of a window with his head held high than bow and scrape for survival. Like Season 2’s “Gimcrack and Bunkum,” a previous series peak, “Erlkönig” brought Boardwalk’s busy boil to a more focused simmer. It was an appealing temperature the show was able to hold for the remainder of the season.

Boardwalk was no longer telling all the stories because it could, it was telling the very specific ones that it should. This was the first year to truly embrace the faded end-of-summer sadness of its setting — exiled from luxury, Steve Buscemi’s Nucky was now living in a ghostly beach hotel called, fittingly, the Albatross — and perhaps for that reason this was also the first year Boardwalk managed to ride history like a wave, not a tramp steamer to be hopped on and off of as circumstances dictated. Yes, the show still lingered too long on the characters whose lives, chronicled in full on that notorious spoiler website Wikipedia, are never truly at risk. (As Meyer Lansky, Anatol Yusef sold the terror of having a gun held to the back of his head, but who among us was buying? He still has to grow up to be Ben Kingsley in Bugsy!) But the real-life winds now seemed to be blowing the show toward something fascinating, not away. This was the season the near-beer of Prohibition was dwarfed in danger by the growing governmental concern over organized crime. And with it came a new, equally organized antagonist: the ascendant Bureau of Investigations, represented in the short term by baby-faced (and, now, no-faced) guest star Brian Geraghty and in the long term by J. Edgar Hoover, played by Eric Ladin.

This contextual momentum helped enormously, but some of the fixes were simpler. Showrunner Terence Winter, always a crowd-pleaser at heart (during his time on The Sopranos it was Winter who advocated for bringing back Valery, the escaped Russian from “Pine Barrens”), provided a flurry of fan service worthy of the Ritz. Gone was Nucky and Margaret’s bloodless marriage (Kelly Macdonald, an actress far spunkier than Winter’s imagination, was mostly gone too), while audience favorites Al Capone (Stephen Graham), Richard Harrow (Jack Huston), and especially Chalky White (a never-better Michael K. Williams, who this year revealed himself to be the Absorbing Man of actors; the more thrown at him, the stronger he became) were pushed to the fore. As per usual, Winter couldn’t restrain himself on a preseason pass through the guest star buffet, adding the exceptional Jeffrey Wright and the strong Ron Livingston to an already overstuffed cast. But instead of just lacquering on extras, he also nurtured from within: The appealing Ben Rosenfield was new to the show but his character, Will Thompson, was not. Teasing out drama from existing situations rather than relying on external events is the mark of a good series, and it’s something with which Boardwalk Empire has long struggled. It’s impossible to care what the Thompson boys are enriching themselves for if we don’t know, or care, about the people they’re desperate to protect. (The corruption of Will also suggested a smart mulligan on all the generational storytelling the show abandoned when Michael Pitt slouched off the set in Season 2.)

But not even the most era-appropriate, bespoke Band-Aid can cover up Boardwalk Empire’s original self-inflicted wound: Its main character is also its weakest link. Steve Buscemi, a gifted and lively actor, wears Nucky’s suits like a straitjacket, his strained and pinched expression suggesting a man more interested in importing prune juice than liquor. In the fourth season, everything still revolved around Nucky but he remained utterly without sympathy or intrigue. He’s perpetually the smartest guy in the room and the dullest. He goes to New York, lights a cigarette, pinches his lips. It’s the same story while romancing Patricia Arquette in Florida and again while listening to Will play the ukulele in Jersey. The ginned-up brother conflict with Eli was fine, particularly thanks to Shea Whigham’s 100-proof misery, but ultimately unpersuasive. (Winter loves his mob movie references but going full Fredo would be a rowboat too far.) The smarter play was the more subtle transition of Nucky from Boardwalk’s antihero to its unstoppable appetite. “Nothing will fill that hole you got inside,” Eli said last night before getting traded to Chicago for two deep-dish pizzas and a Tony winner to be named later. “Don’t you know that yet?” Nucky was already the black hole lurking within Boardwalk Empire; now all that sucking at least has a purpose.

Other than its lacking leading man, Boardwalk’s other uncurable affliction is its utter lack of women — other than the whores given as much dialogue as they are clothing, of course. I guess Arquette’s sass-talking Sally Wheet was an attempt to remedy this — she has her own money, goshdurnit! — but her hot passion for a cold fish like Nucky makes her suspect to me. Gretchen Mol is still haunting the margins of the show, like a vestigial tail or, better, the wayward hem of a gown left over from a distant ball. The yo-yoing of Gillian Darmody’s fortunes was by far the least compelling portion of the year, though she did get one key line (“Why does a man get to do anything he wants?!”) and I liked Livingston as Roy, the Pinkerton agent willing to go above (or below) and beyond to get his gal. (This is actually classic Boardwalk: A story line about a Pinkerton detective in 1924 is so much more interesting than a story line about the heroin-addicted mother of a character who died two seasons ago! It’s the same impulse that led Winter to set the show in boring Atlantic City when he can’t keep his eye, or his cameras, out of Manhattan, Chicago, and now sweaty, swampy Tampa.) I’m happy the show toned down the goony excesses that marred Bobby Cannavale’s character (and season), but even without heads being smashed off with shovels, Boardwalk remains a macho pissing contest. I liked Michael Shannon better this year than in the past, but watching him reenact a mid-2000s hip-hop video on his quivering, Nordic wife after plugging three dopes and helping whack a fourth was just plain silly. Murder isn’t really about making it rain and making women know their place. It’s about killing a living being, and it generally kind of sucks. Just once I’d like to see the show examine a relationship that’s more than just the same old guys and dolls. 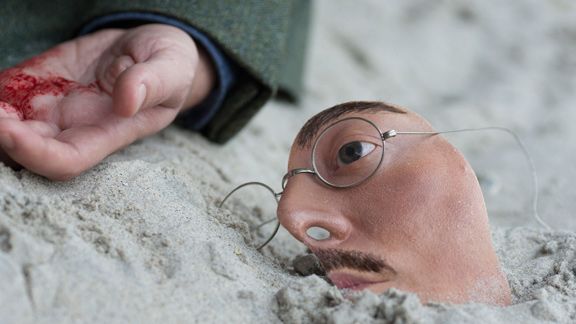 It’s well worth faulting Boardwalk for its lack of interest in women, but not to the point where it clouds the show’s commitment to a different kind of diversity. Not since the sainted The Wire has a prestige series spent as much time telling the stories of African American characters as Boardwalk Empire; this season, in particular, passed the Racial Bechdel Test with flying colors. The cultural collision between Williams’s seething Chalky and Wright’s icily precise Narcisse was endlessly fascinating. Both were self-made men playing a very deadly game of dress-up; both were brought low by ascending too high in a world that rejects them. The scene in which Narcisse takes the chair next to Nucky at Club Onyx in order to enjoy some broadly racist comedy — a club owned by Chalky but one in which he is not permitted to sit down — deserves its own essay. The shifting tones of malice and power that bubbled between Chalky and Eric LaRay Harvey’s ferociously leonine Mr. Purnsley likely deserves another. And one of the best performances in a year full of them was given by Louis Gossett Jr. as Chalky’s mentor Oscar in last week’s “Havre de Grace.” By checking out and giving up, Oscar, blinded and fading in a crumbling Maryland house, demonstrated how little Chalky really has.

Last night’s “Farewell Daddy Blues” brought the season to an end in a novel way for Boardwalk Empire. This wasn’t the explosive shock of Season 2 or the exploding reset button of Season 3. Rather, the intertwined lives of the many (oh so many!) protagonists were pulled more tightly into knots; for some, they resembled nooses. Capone moved up. Nucky stayed put. The death of Maybelle was certainly horrific — not the least because the show was, once again, using a smart, beautiful woman as emotional Astroturf for the stomping suffering of men — and quite possibly unnecessary. But I appreciated where it left us: with Narcisse and Chalky both as losers, utterly undone by a system that grudgingly tolerates the Nuckies of the world but holds a special level of malice for African Americans. There are worse things to anticipate than a fifth season dominated by their dual quests for reinstatement and revenge.

As for what it did to Richard, I was less sold. Huston took a bit part and turned him into something quite extraordinary: a walking wound who wore his humanity like a mask. But if Richard wasn’t again going to be a superhuman killing machine — and thank goodness for that — the only alternative was reducing him, once again, to a bit part. I’ll miss him and the excellent Wrenn Schmidt as Julia. I would have liked a happier ending for them both. (Death: a fate worse than Wisconsin!) Even so, it’s hard to argue that it wasn’t time for him to go.

That bit of surprise closure aside, this season finale, more than anything, felt to me like a beginning. For the first time in its history, Boardwalk Empire is thrumming along, devoted to something more than just immaculately polishing its pocket watch. There’s a sense of loss and menace and desire here that for too long was smothered in the herringbone jackets, the crystal decanters, and the heavily bound books. We’re finally free of the garish boardwalk amusements and find ourselves sinking into the shifting, uncertain sands. I’m curious to see what washes in on the next high tide. Boardwalk Empire isn’t a great show, and that’s unlikely to change. But it has suddenly become an interesting one.