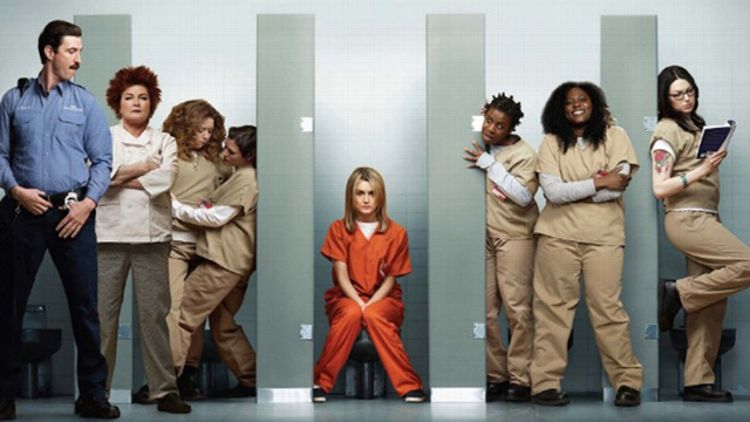 I hate the Netflix distribution model, and the way, every few weeks, it backs up the content truck at the stroke of midnight and offloads 13 hours of industrial-strength television. I’ve written at length about how this emphasis on quantity robs quality material of the time necessary to consider or even savor it, how it mutes the great beehive of conversation that has sprung up around TV in recent years and replaced it with the lonely, furtive clicks of a solitary remote control. We don’t always eat for the sole purpose of getting full, and we shouldn’t consume art that way, either. There’s a reason you’d never order anything à la carte that can be found in an all-you-can-eat buffet.

But I’d be lying if I didn’t say that Netflix, thus far, has chosen projects that actually benefit from bingeing. House of Cards had all of the weight of a great cable drama but almost none of the depth; it was probably better served as a lurid, late-night entertainment. Hemlock Grove was a quick genre cash-in, something mildly diverting and occasionally horrifying to slot between streams of An American Werewolf in London and Alvin and the Chipmunks Meet the Wolfman. And Arrested Development … well, no one is more primed to stuff his face than a comedy nerd who’s been starving for seven years. Even better, the all-at-once episode dump helped creator Mitch Hurwitz gin up an overlapping conceit that helped explain away the varying commitment levels of the cast and the middling humor in the scripts. It’s always beneficial to tell someone you’ve disappointed that they just didn’t understand the intent.

Orange Is the New Black arrived late last week in typical fashion, crashing onto the Netflix servers with all the grace of a Jay-Z app download. Created by Weeds dispensary Jenji Kohan, it’s a light dramedy about a bubbly, Whole Foods–shopping blonde sent to a minimum-security women’s prison. Expectations were slight; hype was nil. But if you’re thinking that this was just an attempt to kill time before Let’s Go to Prison is available to stream, or for Netflix shareholders to get in on some of that sweet Caged Heat cash that Cinemax After Dark has been raking in for years, then it’s time to think again. Because Orange Is the New Black is excellent. Like, jaw-dropping, spirit-lifting excellent. It’s instantly the best original series in Netflix’s brief history. (Sorry, Little Steven! Here’s hoping you can find some solace in your side job.) It’s also the first example of how and why Netflix’s strategy might be good for more than just insomnia after all.

As the creator of Weeds — eight seasons, 102 episodes, and a pair of Emmys — Jenji Kohan can take a meeting with anyone in Hollywood. She can also, if she so wishes, choose to transition gracefully into the next phase of her showrunning career the way many before her have: by inking a profitable overall deal with a studio and spending a few happy, idle years dreaming up concepts and dabbling with rewrites, secure in the knowledge that the paychecks will continue even if nothing ever makes it to air. But Kohan fell in love with Orange Is the New Black: My Year in a Women’s Prison, a memoir by Piper Kerman, and was committed to bringing it to series. I don’t know any of the particulars, but I imagine Showtime, Kohan’s former home, was among the first to pass. Mounting a new show these days isn’t just an enormous expense in dollars, it’s also expensive in perception. Even with its tough-sell subject matter, Orange might have flown at the old Showtime, when it was content to counterprogram the alpha males of HBO with a flurry of women-in-high-concept-peril dramedies (Weeds, The Big C, Nurse Jackie, etc.). But post-Homeland, everything president David Nevins puts on the air needs to blow up bigger than [HOMELAND SPOILERS REDACTED]. Netflix applied a similar policy when it outbid HBO for House of Cards, spending a fortune for the cachet of luring big-screen vets (and, it should be noted, small-screen n00bs) David Fincher and Kevin Spacey to a company that was, until recently, mostly famous for keeping the USPS in business. But with Orange it’s using its deep pockets — and apparent disregard for ratings — in a more hopeful, not to mention unique, way: to finance the passion projects of established television talents.

It’s worth noting how rare this actually is. HBO produced four seasons of Treme and FX took a wild gamble on the auteurist abilities of Louis C.K., but really those are the exceptions that prove the rule. Orange — which balances jokes about juice cleanses and “artisanal bath products” with the sort of real talk about race, gender, and identity usually limited to college seminars — requires a tap dance of tone so delicate it would make Fred Astaire look like Fred Flintstone. In the wrong hands, this premise would (and possibly should) be a disaster. But, in the first few episodes at least, Kohan is able to achieve something here so masterful it’s dizzying. Orange burns with the kind of laughter that usually only comes after tears; it’s audacious, shocking, intimate, and intense. For the first time, bingeing seems like a good idea, if only because I can’t imagine the cupboards ever running bare. The series is packed with more strong female roles than most casting directors see in a year, it attempts more hairpin turns than your average NASCAR driver, and it weaves in riveting, universe-expanding flashbacks in a way no one’s managed since the first season of Lost. “This isn’t Oz,” says the beleaguered counselor in the pilot — and thank goodness for that.

Taylor Schilling — best not remembered for her turn in the unasked-for movie version of Atlas Shrugged — is revelatory in the potentially thankless lead role of Piper Chapman. Piper is a vivacious “good person” with a burgeoning soap business and a nebbishy fiancé (Jason Biggs, once again playing Jewish and once again whacking off on camera), but she’s hiding one big secret: Instead of bumming around Europe or moving back in with her parents after college, Piper spent her twenties as a love-struck drug mule in a relationship with a smoldering Laura Prepon (That ’70s Show). When, a decade later, Piper is sentenced to 15 months in the big house, her yuppie-fantasy version of herself washes away like so much aloe butter down the drain. It takes real talent to make ignorance and privilege seem sympathetic; Schilling’s Piper is often the butt of the joke, but the actress never winks. It’s the difference between Reese Witherspoon in Election and Reese Witherspoon in Legally Blonde 2.

Kohan is well aware that the conceit of “white girl surrounded by scary ethnic cons” is a non-starter, both dramatically and otherwise, so she has taken great pains to add nuance to Piper even as she surrounds Schilling with the most surprising and engaging rogue’s gallery of supporting players since The Office. There’s the happily resurrected Natasha Lyonne as a sardonic burnout, comedian Lea DeLaria as a butch schemer, Michelle Hurst as an imposing, elderly neat freak, and, in a groundbreaking performance, the divine Laverne Cox as a transgender fireman turned hair stylist. Star Trek nuts will be stunned to see their beloved Captain Janeway having the time of her life as Red, a Russian enforcer who trades favors and runs the kitchen with a hammer and sickle (she sends Tampax sandwiches to anyone who dares cross her). I can only hope future episodes (and seasons; Orange was renewed for a second before it even premiered) will find more space for fascinating fringe characters like the spacey Yoga Jones or the ferocious Watson. There are worse people to be locked up with, even if it’s only on your couch.

In the fourth episode, “Imaginary Enemies,” a story line involving a purloined screwdriver plays audience expectation like a violin, leading to one of the more satisfying (and surprising) outcomes I can remember. I’ve got eight episodes left and I can’t wait to write more once I’ve finished. There’s so much stuff for Kohan to play with here that, after she’s handled the heavy lifting of exposition in the pilot, it becomes obvious why she was so insistent on seeing this project through. Her version of Litchfield Correctional Facility, with its tribal politics, its leering guards, and its radically recalibrated definitions of both terror and hope, starts to feel less like a story engine and more like the story engine. Nothing is off-limits, and I have no idea what’s around the bend. Many creators talk about the freedoms offered by television’s new platforms, but Kohan is one of the few to snatch those freedoms, stuff them in a bag, and take off on a wild joyride like this.

I understand why other networks may have been leery of Orange Is the New Black, but I hope its success leads other frustrated creators to take their zombie and antihero-free scripts over to Netflix. And I hope Netflix will embrace this identity as an artist-empowering risk taker over the many others — Prestige-Gobbling HBO Lite, Fan-Servicing Resurrection Machine — it has tried on for size. Netflix loves to talk big about paradigm shifts and the crumbling old media order. But as any of the cons on this show will tell you, it’s one thing to say you’re going to break the rules and another to actually shatter them to pieces.

'Shipping Newsroom, Season 2, Episode 1: 'First Thing We Do, Let's Kill All the Lawyers'