Q&A: The Creator of ‘BoJack Horseman’ Discusses the Comedy of Depression and the ‘Bill Cosby Episode’ 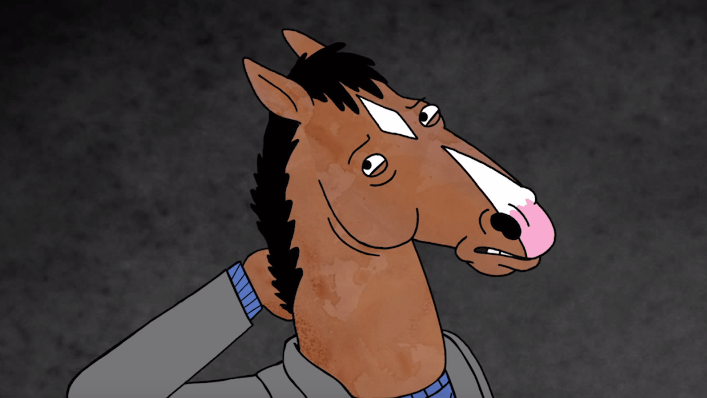 BoJack Horseman is one of the best shows on television, in spite of being one of the hardest to describe. The series focuses on a washed-up ‘90s sitcom star (Will Arnett) who is a jerk to everyone around him, including his agent-slash-ex (Amy Sedaris), freeloading best friend (Aaron Paul), and the ghostwriter of his autobiography (Alison Brie). But by the middle of its debut season, BoJack grew into something much bigger and more important.

Where the character of BoJack on any other show might have either been a miserable bastard redeemed by the love of a “good woman” or burrowed deeper into the hole of existential despair he’d dug for himself, here he recognizes how unfulfilled he is, tries to make meaningful connections with those around him — and mostly fails. It’s one of the most unflinching, brutal, and empathetic looks at serious depression that pop culture has ever produced. And, yes, it’s also funny.

BoJack is creator Raphael Bob-Waksberg’s first real TV credit — in fact, this is his first Television Critics’ Association press tour, and he sounds tired from the long day (during which Netflix announced it had ordered a third season of the show). He sarcastically describes just how much fun his first TCAs has been. “You gotta come out here,” he says over the phone. Bob-Waksberg’s relative lack of industry history gives the show a somewhat unique platform from which to engage in the time-honored tradition of showbiz satire, including an episode widely deemed to be about Bill Cosby. I talked to Bob-Waksberg about the show’s capacity to level institutional critique and about retroactively making jokes about Marisa Tomei.

The marriage between Diane and Mr. Peanutbutter is a pretty big thread of this season. When did you decide to give it a serious foundation?

A foundation for story, or for the characters?

Well, their marriage is kind of funny and weird in Season 1, and then this season you have this moment of, “Oh, I get it.”

Oh, good, I’m glad you get it now! I think part of the fun of the show for me is, what’s the silliest, wackiest thing I can think of, and then let’s take that thing really seriously, let’s hack away at it until we find the heart beating underneath. The clearest example for that is BoJack himself, and I think a lot of people at the beginning of the series kind of assumed, “OK, I get what this kind of show is. This is a wacky, silly cartoon about an asshole character who doesn’t care about anybody else.”

We were breaking the Christmas special [and] the question was, can we do this really dumb, really bad episode of Horsin’ Around, that in the end maybe makes you feel a little bit for the characters of the Horse and Sabrina, as played by BoJack and Sarah Lynn. How can we take this more seriously? How can we take the Princess Caroline–Vincent Adultman relationship more seriously? How can we resolve that in a way that feels like it has real weight and real meaning?

So the question, going in, for Diane and Mr. Peanutbutter, was, these are characters who got married very quickly, all of a sudden — what does that mean? What does the first year of their marriage look like? I did want to explore, what do these characters see in each other? I think it’s very easy to be dismissive of them as a couple, but even the first season we kind of show why Diane might be attracted to this kind of guy, even though you might expect she’d be more attracted to a BoJack kind of guy.

A lot of the reception of this season has focused on Episode 7. How do you feel about it being described as “the Cosby episode”?

I don’t know if I’m surprised. One of the things I’m proud of with that episode is that it holds up — it’s about more than any individual celebrity or any individual scandal, in the same way BoJack Horseman is not John Stamos or not Bob Saget or not Tony Danza. He’s an invented character that riffs on a lot of different personae. The Hank Hippopopalous scandal is an invented scandal that riffs on a lot of different things. It makes sense that the Cosby thing is sort of what everyone is talking about right now, but it is very interesting to me that that’s what people seize on, even though in the episode Diane names five other real-life celebrities who have all been accused of doing terrible things to women. It’s funny to me that people have been watching the episode where that happens and say[ing], “Oh, it’s a Cosby riff, end of story.”

It’s funny that, in our society, we have fully now flipped on Cosby, where now Cosby is the bad guy, and it’s OK for him to be a bad guy and it’s OK for us to talk about how he’s a bad guy. I’m very nervous about people clapping their hands together like, “We got ’im folks! Time to move on, story’s over.” The actual underlying story is something more widespread and darker and sadder and grosser than “Cosby is just one man who did some terrible things.” I’m fine that people see it as a Cosby riff — because it kind of is — and see the connections there, but I would hope as we get farther away from the present and people revisit the show that it resonates in other ways and they see other things going on there. I think it’s also a great character piece for Diane, too. I think we say a lot about who she is and what her relationships with other people are like as well.

Is that kind of broader institutional critique something you see the show doing more of as it goes on?

I think when we’re doing our best, we’re kind of doing both. Again, I’ll say I’m very proud of that episode — I think it’s about a big institutional problem, but also tells a very small, personal story about one woman and her journey and where she is in the season. I remember in Season 1, the “BoJack hates the troops” episode is kind of about the military and how our society views the military, but to me it was always more about BoJack having trouble opening up to this woman who’s writing a book about him, and the resolution of the story is he decides, “OK, I’m going to be honest. Full truth, here we go.”

I think we have a lot of soapbox-y indictments of society — hopefully some more subtle than others — but I think the whole show is kind of about what we do to people in the spotlight and how we treat our celebrities, and how celebrities treat themselves, and what we expect out of them, and how we attack them and/or support them and indulge them. So, yes, there will be more of that, and more of other things as well.

The celebrity aspect is interesting, because BoJack’s nearly endless stream of money has become an even bigger part of the show. Do you feel like that money helps fuel the comedy? Could it ever run out, or would the show become impossible if BoJack were destitute?

Do you have a sense of how BoJack has changed over the course of the show?

I think it’s very much one step forward, two steps back, three steps forward, right? It’s not going to be a straight line. I think the biggest change, that kind of happens toward the end of Season 1, is him realizing he wants to make some changes in his life. When we meet him, he’s very stagnant, and he’s very satisfied being miserable, and he’s kind of decided that this is what his life is. And toward the end of Season 1 he realizes, “Maybe I can change my behavior and have a more satisfying life. Maybe I don’t have to repel all the people who are closest to me.” That’s a big struggle of Season 2, is him figuring out how to do that, and I think a lot of his changes are more incremental, and they kind of go in both directions. I don’t know if I could necessarily summarize who he is at any given moment.

In that case, how do you understand his development — assuming it’s not a straightforward arc?

I don’t know. We’re still finding it, and we’re going to figure out what story we want to tell. I’m not telling a story about a character who never changes — that’s not so interesting to me as a storyteller. But it’s not so easy, and it’s not all of a sudden going to be better. I think there’s a version of the story where BoJack improves greatly, and is a much better friend to people in his life, and is more sensitive and thoughtful, but he still isn’t happy — and then what happens? And that’s interesting, too.

You just got renewed for Season 3! Do you have a sense for the timing on that?

I assume next summer, but we’ll see when that comes together.

When you’re approaching a season as a whole, when do you start to thread in those long-running jokes — like, do you go back and add all of Mr. Peanutbutter’s terrible banners?

It’s a mix of all of it. There’s some running stuff that comes up in the room, and it kind of builds in our scripts. There’s other stuff that the animators contribute, and they’re great jokes. There’s stuff we find in editing that we find — it’s nice that the episodes are released all at once, so we can always go back to Episode 4 and put in something that will reference Episode 8. There’s no one way we do it. It really does come about as a collaboration between everybody across time.

Is there a good example of that kind of retroactive joke?

That’s a good question. Yes, actually — we had kind of two threads in Season 1. We mentioned that BoJack has this sneezing picture that he’s really embarrassed about, and then, you know, five episodes later, we mention that there’s some incident where he sneezed on Marisa Tomei. And it wasn’t until we were editing Episode 11, where we were finally going to see this incident, where I had the idea, “Oh my god, this should be the sneezing picture. We’ve got to go back to Episode 2 and make that match the time he sneezed on Marisa Tomei.”

So You're Saying There's a Chance: How Meek Mill Can Still Win This Drake Beef