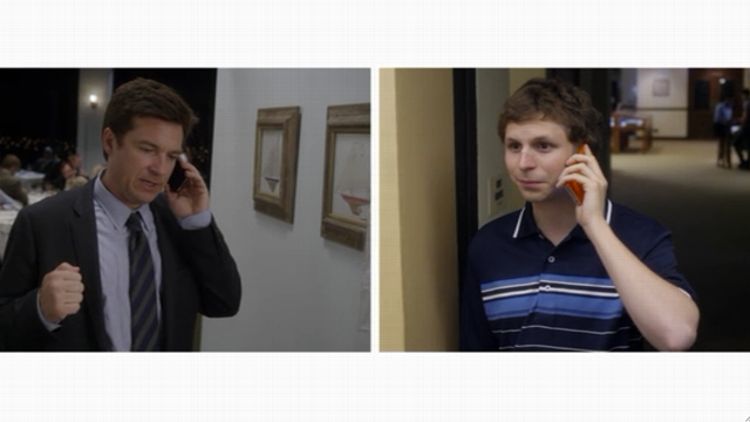 The momentum that kept the last couple of episodes clicking along like an eerily precise percussion instrument continues with “Blockheads.” Indeed, the episode moves so merrily forward that it continues (as usual) past the credits and presumably right into the next season.

The growth of “binge-watching” and longform serial television has meant that viewers are gifted more and more with shows that approach their seasons more like novels than a collection of short stories. From Lost to Boardwalk Empire to Battlestar Galactica to Game of Thrones: Producers have the long view, and it encourages in a certain kind of fan the sort of precision viewing that we’re attempting with Arrested. I’m not entirely sure examining this season has led to the deep pleasures that came, for me, with seeing all the hand and “loose seal” call-forwards in early AD episodes once I went back and watched again.

What I appreciated most about “Blockheads” wasn’t the way that so many of the story lines were finally neatened up, joined, and trimmed off — if anything, I was relieved that the Cinco de Cuatro clown car was mostly idling offscreen. The pleasures of “Blockheads” were in the emotional payoffs, the way the plot finally rips the scaffolding of falsehoods and fakery away from George Michael and Michael’s relationship, letting it stand (or possibly fall) on the shaky ground of family.

And so how did that come about?

We begin with George Michael and Michael playing “lie tag” (stealing that, by the way) at the Ealing Club, each trying to cover for why they weren’t with the other someplace else. George Michael, provocatively, is “more adept at lying than anyone suspected.”

He’s also better with the ladies, and the evening ends with him making out with Rebel in the Ealing Club photo booth even as Michael whines to Ron Howard about their deteriorating relationship. They used to be like brothers, he tells Howard, who, as the narrator, adds, “In fairness, this is something a Bluth brother would do.”

It’s George Michael, however, who feels bad about the subterfuge and the estrangement, and in that way, “it seemed like the two men were growing less alike everyday.” Yet, because he doesn’t realize that it’s his dad whom he’s competing with, George Michael feels no compunction about having Rebel over to the dorm. He also is still too timid to come clean about Fakeblock, believing (perhaps rightly) that Rebel would be less smitten if he were not an unpretentious billionaire but rather an unpretentious “woodblock player with a heightened ability to track the passage of time.”

His assignation with Rebel caused problems in other relationships besides the filial one. P-Hound picks a fight over George Michael’s takeover of the room (and the Fakeblock software). This leads, obviously, to a twin-centric, pack-first, no-talking-after roommate eviction vote, and George Michael (“make a note of that, it’s one person”) loses.

Bereft, he runs into his “beeping uncle,” who tries to force a forget-me-now bologna sandwich on him (wanting to block the memory of the incesty date at the Gothic Castle). He fails and George Michael tells him it’s not that big a deal. He’s right, says Gob. “I go to those things too quickly.”

Eager to make good with his nephew, and to sell some housing stock, Gob talks George Michael into buying in Sudden Valley — with the promise of a Fakeblock windfall, “we can put you in a Bluth in no time.”

The sex offenders of Sudden Valley are equally eager for the same thing and flock to their young neighbor: “He’s 22 but looks 16!” It’s their welcome that opened the first George Michael episode; to their credit (I guess?), they do not love him for his (fake) money but because he’s fake jailbait.

Rebel comes to visit, but she bears bad news: George Michael is taking things too seriously. (She brings her son, whose presence evacuates Sudden Valley pretty quickly.) George Michael is left with only his counterfeit success to comfort him, but upon seeing just how badly Maeby has overbuilt his fantasy empire, he fires her. She is quick to find a way to get revenge: She gives Michael the intel that Rebel is seeking a less clingy relationship. Michael puts this insight to use and goes from being tongue-tied around Rebel to being tongue-tied with her.

But he’s still a bit of a klutz and when he tries to steal the strip of photo-booth pics as proof of their relationship, he winds up stealing the ones she took with George Michael. His sense of betrayal leads inevitably to a sense of righteousness (that’s kind of Michael’s thing), and he goes from telling Maeby she’s out of the movie to giving Gob a piece of his mind. However, he runs into George Michael first.

George Michael’s sweet befuddlement (it charms audiences, too!) and desire to rebuild their relationship, however, keeps his father from springing on him the ugly truth that they’re both banging the same girl — especially since George Michael tells him he thinks the relationship is over.

TO THE CINCO. George Michael is there to deliver a Fakeblock keynote, and he runs into most of the motley crew. He asks Gob for relationship advice and wisely decides to do the opposite — until he reads what he thinks is a note from Rebel (signed “Anonymous,” because of course the casual relationship she wants would be the kind of anonymous one a Fakeblock inventor would want) and doubles down on both the existence of Fakeblock and the relationship. (It turns out that the “Anonymous” in question is the hacker group — maybe more of that in Season 5? This is turning into The Newsroom.)

Gob is dealing with his own self-made problems, like paying off the Mongol horde he hired to build the fake wall between Mexico and the U.S. (“They don’t come in anything less than a horde.”) Michael faces resistance as well, this time from Lucille Two, who it turns out is not as eager to have sex with him as he thought when he planned to do the deed in exchange for an extension on the loan she gave the family. But you flirt with me all the time, he protests. “Those were pity flirts,” she replies.

George Michael, we hear, “was the only Bluth who could be responsible for what he did.” And this newfound sense of responsibility prods him to be honest about his feelings, at least. In the clear light of the morning after, he tells Rebel he wants to take the relationship seriously. She agrees, even though she’s also committed to Michael.

George Michael runs into Michael outside the apartment, and in the crucible of a Southern California afternoon, they confront the reality of who they really are. Michael pretends to be as shocked as his son that they’re both there. But he argues that they’re like twins! Of course they both love Rebel — I mean, even their dates with her are alike; they both took pictures in the Ealing Club photo booth. Oops. It dawns on George Michael that there’s a key difference between them, and he slaps his father.

There’s an “on the next Arrested Development” package, even though Netflix hasn’t confirmed the deal. Of course, the previews have always been a joke. There are rich possibilities teased, if one wants to get one’s hopes up: Gob must deal with the planned Tony Wonder sex date, and Buster is arrested for the murder of Lucille Two. If nothing else, the family escapades are great news for Imagine News.

I was surprised by the lack of running jokes in this episode, though that may speak to its relatively untwisty plot. And, who knows, they may be setting us up for next season. In any case … I’ve noted what I saw; feel free to add what I missed in the comments.

No new guest stars in this episode, kind of shockingly.