‘Shipping Newsroom, Season 2, Episode 1: ‘First Thing We Do, Let’s Kill All the Lawyers’ 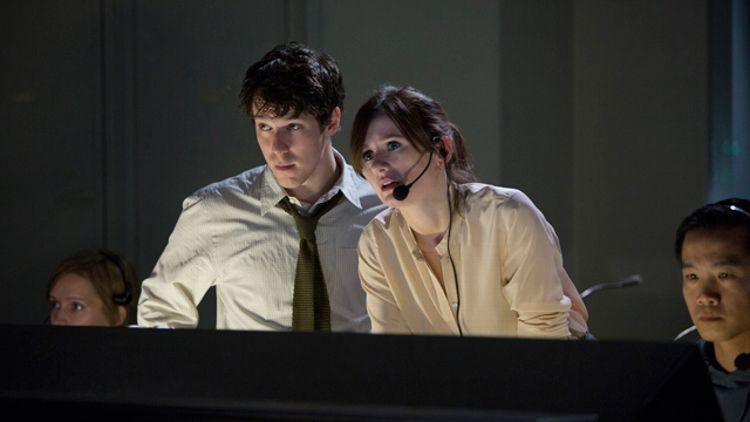 Before we commence another cycle of longing gazes, personal/professional entanglements, and rapid-fire verbal intercourse, I want to make a few things perfectly clear.

1. This is a column for people with emotional investment in the various romantic relationships on the HBO television program The Newsroom. This general category of activity is also known as “‘shipping.” This is not a recap column. The title of this column is a play on the title of E. Annie Proulx’s 1993 Pulitzer Prize–winning novel The Shipping News. I have never read The Shipping News, but I assume it was about the trials and tribulations of running a Mulder/Scully fan BBS.

2. I love this show. So shut your face and accept that. Hand to heart, I have more fun watching The Newsroom than I do watching Mad Men. I am excited to watch this show when it comes on the television. I laugh with and at it (affectionately!) in a 2:1 ratio, which is probably the same as most lifelong friendships.

3. For the sake of brevity, each week I will limit myself to five ‘ships, classified as follows: Rising, New, Steady, Over, and OTP. These should be pretty self-explanatory, and if you are ever in doubt, here’s a quick guide to speaking fangirl.

Don: I’m heading home. I got a 13-day streak going of being a good boyfriend.

Sloan: What do you get if you hit two weeks?

DON. KEEFER. LADIES. AND. GENTLEMEN. Forget the new, tastefully restrained opening credits, I wanna know what happened to this guy. At this time last year he was every cliché about bad boyfriends rolled up into one petulant, oily, slightly unbuttoned package (and we loved him for it). Now he can even make sneaking out on you in the middle of the night because he found out you’re in love with another guy seem like the gentlest, most loving gift. I’ve been trying to put my finger on it, and I kind of think Second Season Don might be some kind of Christ figure? He was so smiley and gentle with Maggie that I couldn’t tell if he was going to break up with her or baptize her.

Sloan and Maggie are barely even recognizable as the same species, even though they both suffer from the same chronic awkwardness disease that seems to have affected the entire female staff of ACN. A Sloan/Don relationship would be a real grown-up situation between two consenting, self-assured adults, whereas Maggie/Don always felt slightly cradle-robberish. Obviously I am a strong believer in a Slon endgame, but that doesn’t mean there can’t be some shenanigans and third parties along the way. Which brings us to:

“You and Sloan Sabbith are going to get along very well,” Mac says to Jerry, and as the words left her mouth the storm clouds over Manhattan parted and the ‘Shipping gods smiled sweetly and fired their love triangle drones down at the ACN studios. As big a fan as I am of Second Season Don, Jerry Dantana has a ton of great qualities and could easily make an argument for some solid Slantana action.

So, sometime between the last time we saw him and the attorney-infested, cyberpunk-Maggie, Butterfly Effected near-present, Will McAvoy’s already superhuman intellect and moral genius has evolved to the point where he’s basically just Sherlock? Bad news for McMac fans, as fiction has generally proven that that kind of spectrum-y brain power is not exactly conducive to getting laid. (When you have the confidence of a tall man, conquering old flames requires a bit of stooping.) So we find Will and Mac this week back in that familiar bickersphere that serves as their romantic ground floor. Will rattles off lyrics to “Friday” (a little late to that one in August 2011; such are the hazards of blogophobia) while Mac saves the DSK report from going up in flames, Will pays for her drink and cab ride. They’re slowly relaxing into Jaime Lannister and Brienne of Tarth territory — the cocky blond and the asexual careerist — with lost purses instead of bear pits.

But never doubt that McMac is still a thing; they are this show’s Bella and Edward, its Kirk and Spock. When Mac heard Van Morrison over the phone and assumed some kind of midlife-crisis intern-banging was going down, it was with more than a little detectable jealousy. And I don’t know why Will lied — twice — about being in bed when he was actually 10 to 100 feet away (not exactly sure of the layout and dimensions of that penthouse) smoking an early 9/11 anniversary doob on his America Thoughts balcony, unless he was just trying to provide a less douchey mental image for his manic little rosebud. Which was very considerate.

“You should call Jim. Tell him to get off the fucking bus. We’re trying to do the news.” —Don Keefer

The only thing wrong with Don’s parting words to Maggie was that they were so much cooler than anything Jim’s ever said or done, and in real life Maggie would instantly forget she ever had feelings for anyone else and come crawling back to him. But Maggie is a ridiculous person and Jim is a ridiculous person and they deserve to do unimaginative secret handshakes together in front of all of their mortified coworkers and post some quirky self-referential YouTube engagement announcement on the SATC bus that gets, like, 950 views tops. Please understand: This whole breakup — stuck in at the end out of nowhere like some Post-it note from a test screening — is only important insomuch as it means there is now room for the Slon-tana triangle to take center stage.

If Jenna “Greatest Country in the World Sorority Girl” Johnson was the catalyst for Will McAvoy’s mission to civilize, I’d say abducting hiring her as an office piñata intern and force-encouraging her to memorize 1930s Gershwin musicals is a mission accomplished. Even if she thinks it’s called “Of the Icing.”

Filed Under: The Newsroom