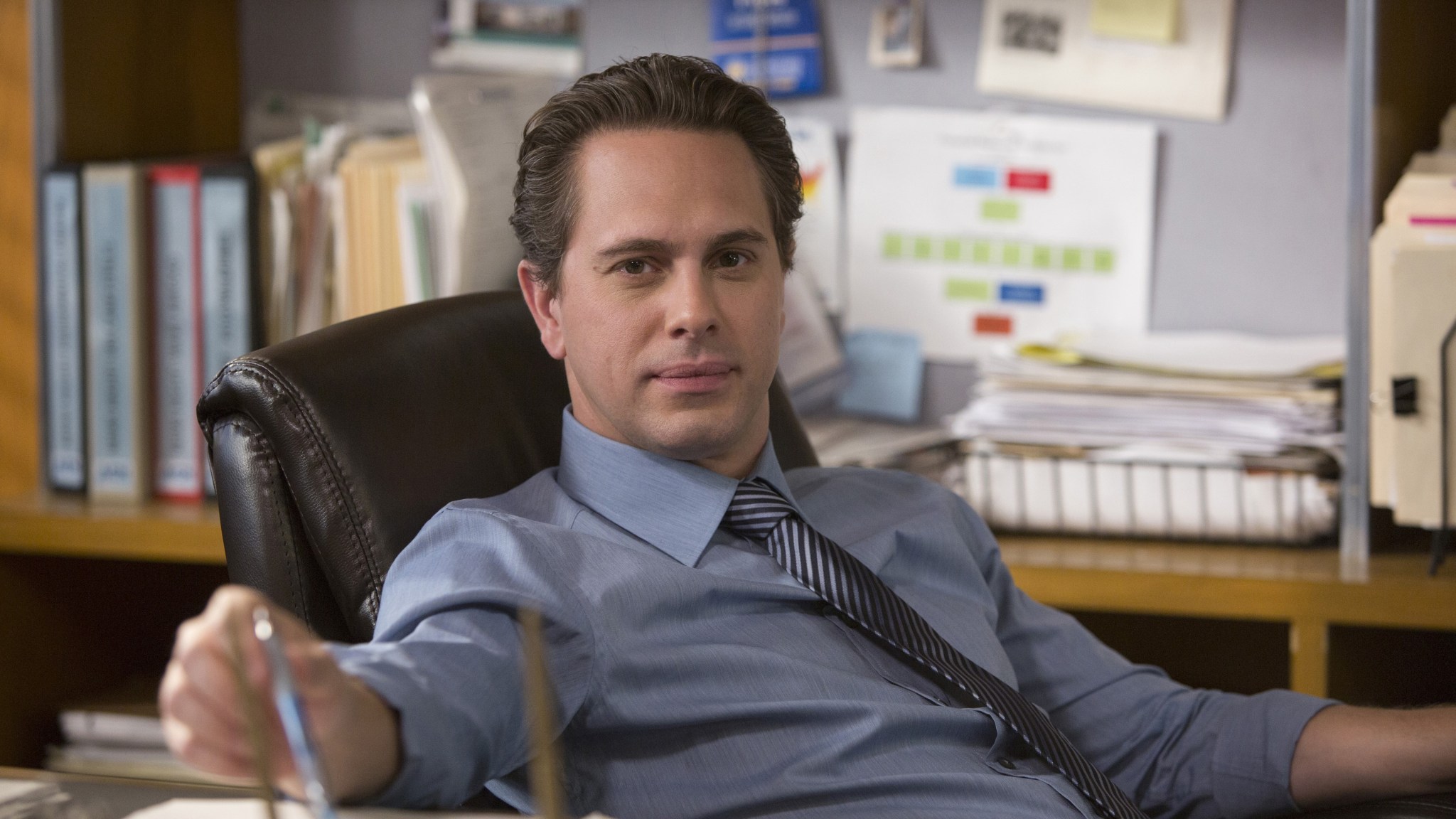 I come to bury Aaron Sorkin, not to praise him.

With only one episode left before the end of The Newsroom, Sorkin managed to produce an episode of the series that exemplified all of its worst tendencies, to such an extreme that it may make it impossible for me to take anything he writes or has written seriously ever again.

That was the praise part.

“Oh Shenandoah” is the darkest moment for the characters of The Newsroom. Ryan from The Office (a.k.a. the Facebook guy from The New Republic) now owns the network, Will is in prison, and Jim and Maggie are off in Russia together, chasing Edward Snowden for some reason. The Empire Strikes Back–ness of the narrative allows Sorkin to run through all of his most hackneyed, horrifying tropes. It’s always darkest before the dawn, but it seems like Sorkin forgot to wake up.

Sorkin’s descent starts with Will in prison — the culmination of the Kundu story, and theoretically the lowest point for our protagonist. But by skipping past most of Will’s incarceration, all The Newsroom does is sacrifice his sanity. See, Will gets a cellmate — in solitary confinement, no less — who challenges him on his “East Coast elitism,” his Don Quixote complex, and his knowledge of the difference between Harvard and Yale. The guy is just a dick, casually admitting to hating Jews and beating his wife. He somehow makes Will borderline sympathetic. When Will gets out of prison — surprise! — the cell is empty. Then we zoom in on the photo of Will, the fish, and his dad, and no, could it be? There’s no way … yup: The cellmate was Will hallucinating his dad.

The scenes are a series of uninspired, stereotypical prison conversations that somehow don’t make more sense on a second, more informed viewing (I checked). It’s a shadow of Sorkin’s previous work. When, on The West Wing, President Bartlet sees Mrs. Landingham in “Two Cathedrals,” it has some emotional force, because we’ve actually seen their relationship and care about Bartlet as he struggles to deal with the implications of his medical condition.

These were characters we knew and liked, who performed acts beyond getting to smugly read the words “No, sir” written on a notepad. And Will’s father’s death at the end of Season 2’s “News Night With Will McAvoy” is actually one of the few touching moments the series has produced. It’s too bad that it had to get cheapened in the service of Sorkin reducing Will to a series of too-obvious, cartoonish daddy issues in the penultimate episode of the show.

As sappy as Will’s “Cat’s in the Cradle” moment is, it has nothing on the final romantic coupling the show needed in order to give (almost) everyone the happy ending they are cosmically mandated. Maggie and Jim have for some reason both been sent to Russia to try to get an interview with Edward Snowden. Even though they don’t get the interview, Jim heroically sacrifices all of his stuff so they can get on the plane and he can prove how good he is, then tells Maggie he is totally into her. In the second-worst display of agency (or lack thereof) Maggie has ever shown in her love life, she tells Jim that if he wanted to be with her, they would just be together, because clearly she has no power to resist Jim’s turdlike charms. Then she forces him to move to the back of the plane.

Five minutes later, in the biggest and worst display of agency Maggie has ever shown in her love life, she gets up and goes to Jim’s new seat (interrupting the riveting episode of Star Trek he was watching on his iPad) so that they can furiously make out/cry/fall vastly short of being Josh and Donna, Casey and Dana, or even Mark Zuckerberg and that woman who rejected him and inspired the creation of Facebook. Jim and Maggie deserve each other.

The sameness of Sorkin’s dialogue — the way Jim and Maggie are basically destined to fuse, Dragon Ball Z–style, into a rakishly disheveled pair of identical, gross twins, like Will and MacKenzie — is fine. It’s all part of Sorkin’s screwball romance in a high-pressure work environment, and it conveys both the need for everyone to do their jobs and to have a weird, forced sexual tension with one another. And it’s why Sorkin’s dramatic work so often comes across as an expression (or bestowal) of his own opinions. On this show, especially, the characters aren’t differentiated much beyond their general shared Sorkinesque speech patterns and supposedly idealistic methods of doing the news the right way, which makes it easy for Sorkin to position any of them as the voice of reason — as his mouthpiece.

But hearing those speech rhythms — the lofty tone, looping sentences, and endlessly spewed questionable statistics — spouted by a rape victim, only so she can be set up as a straw woman for Sorkin to knock down in the pursuit of “justice,” is downright horrifying.

Others will write more in-depth about the reasons this story — in which Don attempts to convince a rape victim at Princeton not to go on the air and confront her rapist — is grotesque and anti-feminist. Suffice it to say that a middle-aged white man telling a collegiate rape victim how best to go about responding to her rape, without even actually having the young woman in the room, is atrocious. For all of Sorkin’s attempts to soft-pedal what he’s doing here — having Charlie yell that there’s an “epidemic” of collegiate sexual assault, and having Don repeatedly claim that he has the victim’s best interests at heart — there is just no way this could have worked. Sorkin’s dialogue is too artificial and singular to address real, emotional trauma, or to allow a victim room to have her voice be heard. A rape victim on television should not sound like Maggie talking about surreptitiously taping an EPA administrator. Nor should that victim be forced to be a mouthpiece for Sorkin’s views on stuff that happened a long time ago. Unfortunately, The Newsroom has always traded in belated high-minded pronouncements.

Since its premiere, The Newsroom has been criticized for using the 20/20 hindsight baked into its premise to correct the mistakes of journalists — not only does the show’s setting in the recent past allow it to say what reporters should have done, it makes the characters completely impotent; incapable of changing history. But the show is never as incisive as it wants to be or thinks it is, precisely because it only ever addresses events, even important ones, once public opinion has cooled and set a bit. It can never make immediate, vital arguments, and it isn’t equipped to do so.

That’s why there could not have been a worse time for this episode, airing in a week when there really are questions about ethics in journalism, and about how we cover sexual assault and rape in the media.

Knowing how and when to talk to people on both sides of an accusation, what facts to confirm with authority figures, and how to sift through and fact-check details that couldn’t possibly be remembered clearly after being warped by years of trauma are all very real issues, sadly raised by the controversy surrounding Rolling Stone’s UVa. story. Sorkin uses these issues as dramatic props, aiding Don’s attempt to claim the moral high ground. And that might be the worst sin that Sorkin commits in “Oh Shenandoah”: grievously destroying Don Keefer, the best character on the show and half of what made it even remotely worth watching (I speak, of course, of Slon).

The horrible stuff coming out of Don’s mouth in these pre-interview scenes is made worse because, while it’d be easy to imagine, say, Jim taking an awful, sexist stand in favor of the “purity” of the news (because he has spent the entire season doing that to Hallie, to whom I wish the best of luck at Carnivore), Don is special. When he’s wrong, it’s for a reason, and he’s the only person in a real relationship on the show, give or take two minutes of the McAvoy-McHale marriage. But now Don is forever tainted, in service of the worst period ever period instance of Sorkin’s preaching.

Because The Newsroom so often relies on lukewarm takes about what should have happened in the recent past, nearly every character on the show has been enlisted into being Sorkin’s avatar: Neal (doing the Kundu story), Mac (the rules of “News Night 2.0”), Maggie (letting the EPA tape go), Jim (hating Hallie and the Internet), Will (pretty much everything else).

Don, who was a douche at the beginning of the show (here’s a fan video called “Don the Douche”), became competent and likable, but evaded being turned into a puppet in an overly determined, theatrical morality play. Until now. This story comes out of nowhere and is arbitrarily dumped on Don, who has to spend the episode in a series of conversations with the victim, worrying she’ll accuse him of rape, simply because Sorkin (who gets sole credit on the script) wanted to talk about the issue. And with Sorkin having turned our hero into Don Keef-ote, and successfully hollowed out the News Night team, Sloan (and maybe a quarter of Mac) are the only remaining non-horrible characters left standing. Because Charlie Skinner, the evil, sloshed genius behind “News Night 2.0,” has had a heart attack.

Good-bye, Charlie. I will miss your bow ties, grand moral statements, and your drunken pratfalls, and it is a shame you had to die because Sorkin couldn’t think of another way to make the end of the series emotionally resonant without cannibalizing his own filmography (R.I.P., Mrs. Landingham and Leo McGarry — you were the best of us). Charlie’s death just sort of happens while he’s having a fight with Ryan from The Office. Will discovers his death, backed by the strains of “Oh Shenandoah.” Why this song? Maybe it’s supposed to convey the death of the older, “purer” version of America. But all it really signals is the death of the last ounce of respect I had for Sorkin’s writing. (Also, my mom predicted that Charlie was going to die when we watched Episode 3.)

To recap, here is a partial list of things that died while I watched last night’s episode of The Newsroom:

See you next week. Good night. And good luck.

Weekend Box Office Winners & Losers: Hollywood’s Thanksgiving Leftovers Are Scarier Than Whatever Was in ‘The Pyramid’