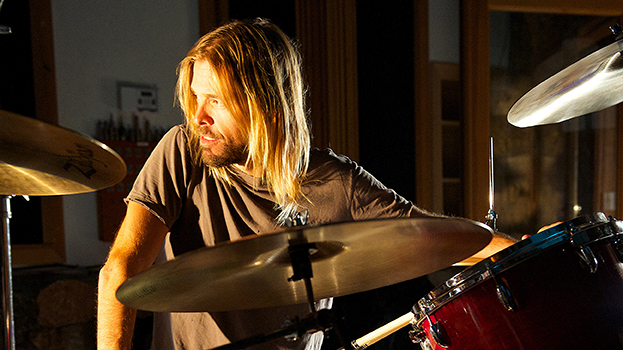 Taylor Hawkins is my favorite TV character of 2014. I really need to tune up my ancient Haro, throw it in the back of a 1981 Jeep Scrambler, and drive out to the ocean with this dude. We would turn on Miami or Straight Shooter by James Gang really loud, grab our bikes, and reenact the slow-dance scene from Rad while shouting, “THIS IS SO FUCKING RAD” at one another.

Sonic Highways, which ended its first and presumably only season Friday, has been one of the most pure pleasurable television experiences I’ve had in recent memory. What could have been an eight-hour commercial for a mediocre Foo Fighters album has been a joyous, ridiculous, pretentious, deeply felt portrait of American music, as seen and heard by Dave Grohl and his band. There have been some thoughtful critiques of what kind of music and musicians Grohl chose to showcase in this series, and I totally hear that, but I think the net positive of getting to see Don Zientara talk about recording with Bad Brains, Cyril Neville explaining the drumming style of Zigaboo Modeliste from the Meters, and Steve Earle evangelizing for Townes Van Zandt on an HBO show is pretty cool.

And nothing is cooler than this dude, sliding in your DMs like …

(All GIFs by Jason Gallagher, via HBO)

That’s Hawkins riding a mountain bike into the old Austin City Limits studio. Why is he on a mountain bike? WHY AREN’T YOU ON A MOUNTAIN BIKE? Almost every episode of Sonic Highways featured a moment of Hawkins being the living embodiment of Mr. Zogs Sex Wax. It was like getting to spend eight hours with James Le Gros’s character from Point Break (P.S. THAT CHARACTER WAS NAMED “ROACH”), only he was the best drummer in the world.

Ah, about that best drummer thing. Hawkins has always been the mildly disruptive force inside the band. The Foo Fighters make somewhat vanilla, occasionally awesome (“Everlong” forever) stadium rock, which I am not going to complain about ever again because they leveraged whatever fame they had and put Trouble Funk on HBO. Along with Grohl, the band members all row in the same direction, with a real happy-just-to-be-here vibe, but every once in a while, Hawkins jumps out of the canoe.

He is a really good drummer in a band with a dude who is maybe the best drummer alive. He is a classic rock head in a group that features members of the Germs, Sunny Day Real Estate, No Use for a Name, and, of course, Nirvana. He is a Cali surfer dude in a band of punks and moody Pacific Northwest types. And his life — his struggles with addiction, and his 2001 overdose — has provided many of the non-musical headlines this usually publicly well-behaved band has seen.

What Hawkins provided Sonic Highways was just the slightest bit of much-needed tension. This thing was basically The Dave Grohl Story Hour, from his weird, if charmingly elliptical way of talking (And I realized … this journey … we were taking … wasn’t really about us … it was about everyone … and all the music) to Grohl playing the role of bandleader to all of America’s musicians.1

Hawkins was the whoopee cushion in this whole thing. He always brought just the right amount of Floyd-from–True Romance to the proceedings, mixing an “I don’t give a shit about the alt rock canon” attitude with a boundless love for music.

This dude is guileless, and it led to the funniest moments of the show. The truly wonderful D.C. episode2 spends half an hour (rightfully) hero-worshiping Fugazi’s Ian MacKaye, only to have Hawkins excitedly step all over the Dischord Records founder’s story about seeing Queen with one of his own. He just can’t contain himself.

The same thing happens in New Orleans. The Foo Fighters have turned Preservation Hall into a makeshift recording studio. The entire episode has been dedicated to the rich musical history of the Crescent City. There’s a 10-minute section on, like, Dr. John’s relationship with Allen Toussaint. And what happens when Hawkins is introduced to Ben Jaffe, the director of Preservation Hall?

So who gives a shit if he’s not Steve Zahn’s character from Treme? This dude loves music SO MUCH. He loves Ted Nugent, he loves Queen, he loves Cheap Trick. Here he is losing his gourd over the fact that JOE WALSH is playing a solo on a Foo Fighters track …

And here he is pantomiming every instrument during a playback of a Foo Fighters song because this dude loves being in the Foo Fighters. A LOT.

Aside from all the wonderful footage and interviews, Hawkins’s role in the band is one of the more interesting things about Sonic Highways. There’s a touching moment, in the New Orleans episode, when he goes off to find Grohl in a bar in the middle of the day. Blink and you might miss a really subtle line about the “obstacles” to recording in a place like New Orleans, where he’s a sober musician in a group of guys who might like to hit the bars while the sun is still up.

Probably the most emotionally affecting episode of the series was the Seattle entry. Kurt Cobain’s suicide is handled with real feeling and dignity, but there’s a great moment toward the end of the episode that stuck with me. Foo Fighters are recording at Robert Lang Studios in Seattle, and for whatever reason, they need to do “cymbal separation technique” to get the drum sound they are looking for.

What this basically means is that Grohl plays cymbals while Hawkins plays the rest of the drums in another part of the live room. The two drummers find this whole enterprise hilarious — Grohl says, “Man, we’re like one fucking drummer, man.” It’s a great moment, with the two of them on split screen while Grohl plays hi-hat and sings “Everlong.”

Then Hawkins says, “I would be so much better if Dave would just play the hi-hat.” I mean, of course you would. That’s Dave Grohl! That’s the dude that plays drums on “Smells Like Teen Spirit”!

It’s such a great, vulnerable, funny, candid moment. Hawkins is full of them. Outside of Sonic Highways being a documentary about these cities and the music you find there, it’s a story about this one band. And maybe you don’t like the band’s music, but it’s really hard not to love the guys in the group. Espeically Hawkins. You just want to grab him and be, like, “Let’s crush a liter of Sunkist and skateboard, man.” He’d proably be down.