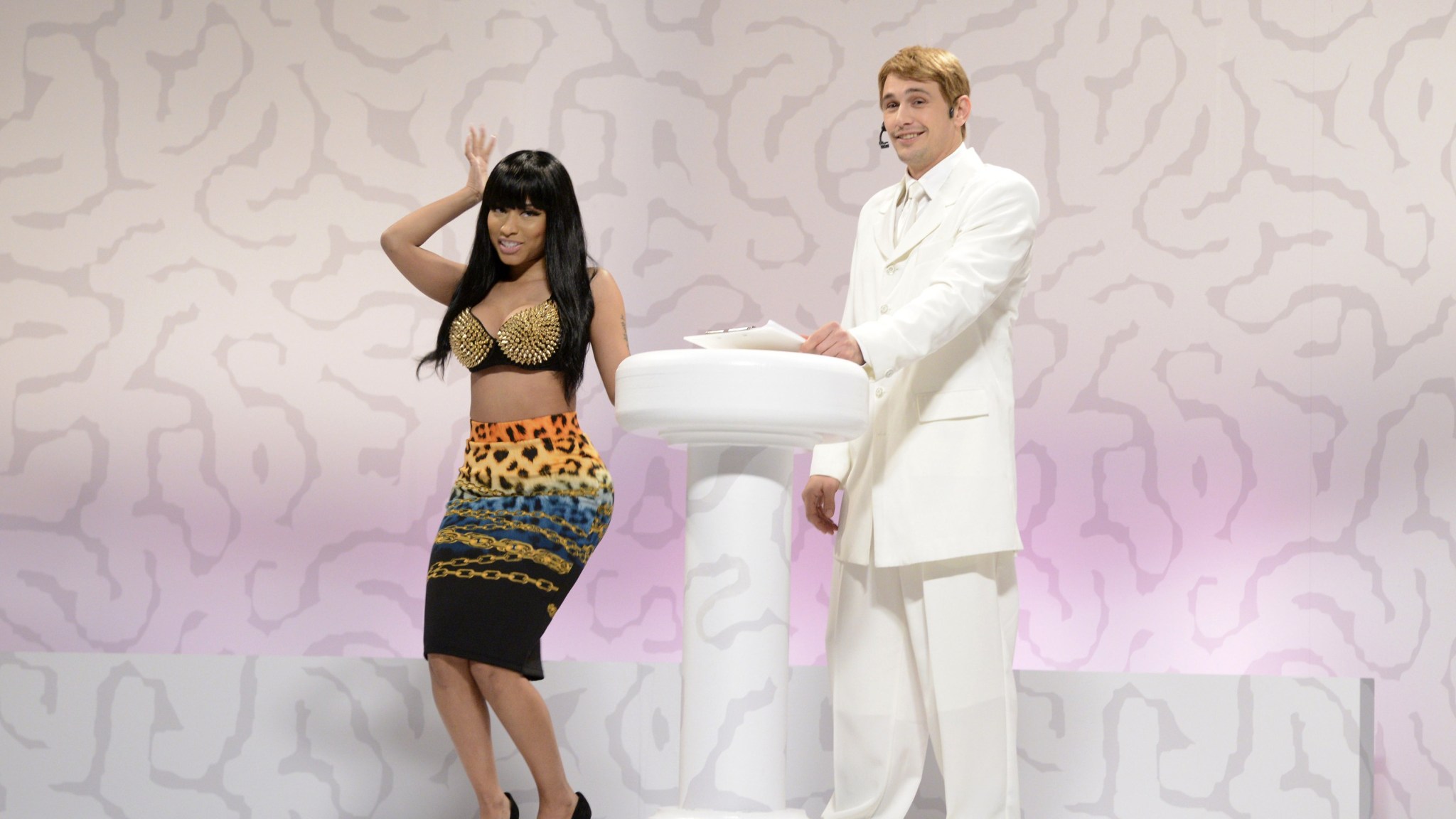 To his varied list of accomplishments since turning into a one-man WTF-industrial complex, James “The Human Smirk” Franco can probably now go ahead and add one more: Saturday Night Live VIP. Hosting for the third time on Saturday (and for the first time since his pretty great SNL doc saw the light of day), Franco cemented the burgeoning symbiotic relationship between himself and the show, fueling us all into a wonderfully bizarre night of comedy. We’re talking bridge trolls! Kid mayors! Bermuda four-ways! Woo!

The show kicked off with both a quick-and-sweet cold open and a monologue, as if they just couldn’t wait to get right into it. In the former, Kenan did Al Sharpton reacting to the protests over the failure to indict the cop who killed Eric Garner, pleasantly surprised that people were actually agreeing with him for the first time in years. Bobby Moynihan — who, six seasons deep, is now a calming, welcome, professional presence whenever he shows — was a Staten Island cop explaining to Sharpton what it would actually take to get an indictment: “It helps if the victim is white?” Echoes of Dave Chappelle, explaining what it would take for him to believe certain allegations he’d rather ignore: “If I saw a tape of R. Kelly peeing on a girl … while a police officer was there … and like four or five of my buddies, and Neal [Brennan] taking notes … and his grandma has to be there, to confirm his identity … ”

For the monologue, Franco was given the gift of those recent Sony leaks, purportedly (but probably not) perpetrated by North Korean cyberspies in retaliation for his and Seth Rogen’s new movie, The Interview, in which they attempt to assassinate Kim Jong-un and high jinks ensue. Of course, Rogen showed up, and together they preemptively displayed some revealing photographs that the hackers had gotten their hands on: Rogen in control-top pantyhose, Rogen teaching Franco how to read, naked Santa lap hangs, and one very well-engineered John and Yoko re-creation. Franco, of course: “I actually like that one!”

From there, we moved fast. The requisite Peter Pan Live! knock-off came quick, anchored by Aidy Bryant bringing back Tonker Bell, a semi-pro “reverse tooth fairy” who’s one part Tinker Bell, one part Ilana from Broad City, and four parts original-recipe Four Loko: “That’s right, I have a boyfriend, and yes, he is the bat from that movie FernGully.”

The Star Wars parody — remember all the old people? They’re all old now! — was a bit undercooked, but Taran Killam does a pretty good Han, and it had its moments (“I have a thyroid issue … like my father before me”). Plus, it’s a slickly produced Star Wars parody, and I seriously can’t get enough of those. (That is not a joke.) (Seriously.)

“Jingle Ballerz” gave us Kate McKinnon’s maniacally preening Justin Bieber, which I could watch on a loop for hours, Nicki as Beyoncé (ICON ON ICON), and Jay Pharoah as Kanye as Baby Jesus, which I can objectively appreciate as funny while subjectively sulk about because I’m pretty sure that, somewhere, Kanye is sulking, too — and when he sulks, I sulk.

Franco’s bridge troll bit had Cecily Strong playing a Wiig-esque weirdo, and doing so excellently, but it was all about the requisite wink-wink–James Franco–is-gay stuff. Which is cool because, goddamn, did he and Kyle Mooney go for it on that makeout.

“Jeremy’s Brain,” in which Franco attempts to clear out a young man’s memory to make room for new information, was the best part of the night, normcore division …

… and the best part of the night, full stop, was the totally insane prerecorded sketch “Grow-a-Guy.” Prefaced with a title card reading “A Mike O’Brien Picture,” it’s a nice look for O’Brien, the writer-turned-cast-member-turned-back-to-writer-but-I-guess-one-that-gets-his-own–“A Spike Lee Joint”–type-honorification. And it was well earned because, holy shit, was that weird. Black Mirror weird. Please, Lorne, continue to let Mike O’Brien cook. (As Slate points out, this is O’Brien and Franco’s second great collaboration, following this April’s weirdly lovely “Monster Pals.”)

Elsewhere: “Weekend Update” kicked off, and struggled with, the Eric Garner story, but you can’t really blame them; that might just be too tragic for comedy. Later, Nicki showed up again, this time as Kim Kardashian (DOUBLE ICON ON ICON), and gave us another great moment in rappers saying “l’chaim.”

Also: Franco was a guy who got really, stupidly mad that he lost a small-town election to an adorable kid mayor, although a potential “maniacal reign of terror by toddler” should maybe have been the skewering move there instead? And finally, wrapping up the night, Vanessa Bayer and Cecily Strong gave us their excellently flat-affect ex-porn-star pitchwomen bit, selling us “Sunseeker Yachts” (pronounced, now and forevermore, as “yakets”). Presented without context: “One time I thought I got banged into another dimension like Intersmellar but I was just stuck in a pull-out couch.”

And that’s about it! Now play us off, self-censoring Nicki Minaj.