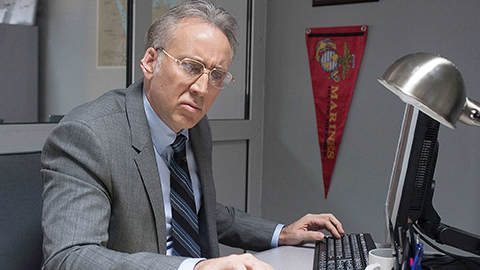 Dying of the Light is a movie made from jokes.

First, you have its star, Nicolas Cage, our greatest actor to be reduced by the Internet into an Upworthy headline. Cage actually gave a top-notch performance this year, in David Gordon Green’s Joe, but you’d never know it; as a culture, we’ve turned him into some hybrid of a talking goat and a brand going haywire on Twitter.

Then you have Paul Schrader. There are two types of great filmmakers in the world. The first are the ones who don’t ever have an off game, the Scorceses and Malicks and P.T.A.s, folks who have never made a film that isn’t worthy of respect, even if it might not be your favorite. Schrader’s in the other camp, the one for writers and directors who can make movies that rank among the best of all time — in Schrader’s case, Taxi Driver and Raging Bull, both of which he wrote — then turn around and do something so bizarre or incoherent or uninteresting that it causes you to question the whole nature of artistry.

Schrader’s most recent claim to something resembling fame came from The Canyons, a minor film immortalized in a story by Stephen Rodrick in The New York Times Magazine. The Canyons starred Lindsay Lohan at the height of her self-immolation. It costarred James Deen, a porn star. It was written by Bret Easton Ellis, an author who treats cocaine like Melville treated the whale. Rodrick’s story sheds an incredible light onto the weird corner of Hollywood in which people struggle mightily to get bad ideas made, believing that they are, in fact, good ideas. “Bad” might be too harsh; it’s more that these ideas are interesting mainly to the people who have them, i.e. Schrader. And the thing about movies is that they require a lot of people to be interested.

That brings us to Dying of the Light, which was just released in (very few) theaters and on VOD. Schrader wrote and directed the film, which stars Cage as Evan Lake, a rotting CIA agent spurred by new intelligence to go chase down his nemesis. What makes the movie different than your typical direct-to-iTunes spy thriller, aside from the involvement of the man who wrote Taxi Driver, is that both Lake and his antagonist, a terrorist named Banir, are dying of various illnesses: Lake has dementia, and Banir has a blood disease. With the help of his protégé/sidekick, an agent played grumblingly by Anton Yelchin, Lake goes to Bucharest and Kenya to chase Banir down.

Beyond The Canyons, Schrader’s productions have a history of conflict. After filming a version of Dominion: Prequel to the Exorcist, the studio was so displeased by Schrader’s work that it had Renny Harlin reshoot the movie, to disastrous results. And in this way, Dying of the Light doesn’t disappoint. After shooting and editing a cut that (some say) was 172 minutes long — it looks like this probably isn’t true, but I’m going to choose to believe it anyway — Schrader claims that producers essentially forced him off the film, then recut it to be shorter and substantially different from his vision. The producers counter that Schrader filmed a movie that strayed substantially from his script, they made reasonable requests for edits, and he voluntarily left in a huff. Schrader’s personal Facebook page is filled with articles from the trades about the film’s problems, and Yelchin, Cage, and executive producer Nicolas Winding Refn, who was initially going to direct the movie based on Schrader’s script, have all stood by him, going so far as to pose in T-shirts bearing the no-disparagement clauses from their contracts.

Considering the track record of Hollywood studios and Schrader, any of this could be true. But watching the Dying of the Light that now exists commercially, it’s easy to side with Schrader — the sequencing here is so bad, so manic and insane, that it almost seems experimental. Scenes are stacked on top of each other without transitions or common threads. At one point, Cage is holding a gun to his head, considering suicide; the next second, he’s sitting in Ruby Tuesday. He has an unexplained love interest, and when he eventually kisses her, the angle they show it from is slightly behind her head, Cage going in like a hungry dog — it might be the worst onscreen kiss I’ve ever seen. Best of all is when Yelchin slits a terrorist’s throat. He rolls the body over, and all of a sudden, the neck is flawless, no six-inch gash to be found. It’s the kind of mistake you see in Ed Wood movies.

Least forgivable of all, the film destroys its actors. Cage’s character goes on a rant against the acting CIA director, whose office he’s just walked into, unannounced, accusing his boss of having caused, like, Benghazi and 9/11. The speech reads like a Facebook comment, and even Cage seems to realize how absurd he sounds.

Later on, he’s having a solemn conversation with Milt, Yelchin’s character, and Milt asks how often he thinks about revenge. Cage goes, “Once a day — all day long,” then starts laughing hysterically. Actors with the emotional highs and lows of Cage need to be protected in the editing process, because their behavior has to have some grounding in reality. Here, the editors expose him.

Is there a good movie hiding in here? I don’t know. Yelchin’s character is a complete joke — he dresses like a 12-year-old, in cargo shorts and graphic polos buttoned to the top, and he seems to have as much knowledge of spycraft as a 12-year-old would. The story is so straightforward and simplistic, it’s laid out in full by Minute 15; Le Carré, this ain’t. And bad editing doesn’t explain away all of the cinematic problems. The occasional fighting has the look of Walker, Texas Ranger with guys waving guns around in one hand and behaving like they have bad AI. And the climax, which involves the same scene repeated twice — as though nobody could think of a better way to end the film — seems like the kind of dream you wake up from annoyed at yourself.

At the same time, the idea of a sick intelligence officer chasing a sick terrorist is intriguing, and Cage does an admirable job grappling with what happens when a strong man becomes weak. I’m sure Schrader’s version is better than this one, which feels unfinished in every way. But how much better could it be?