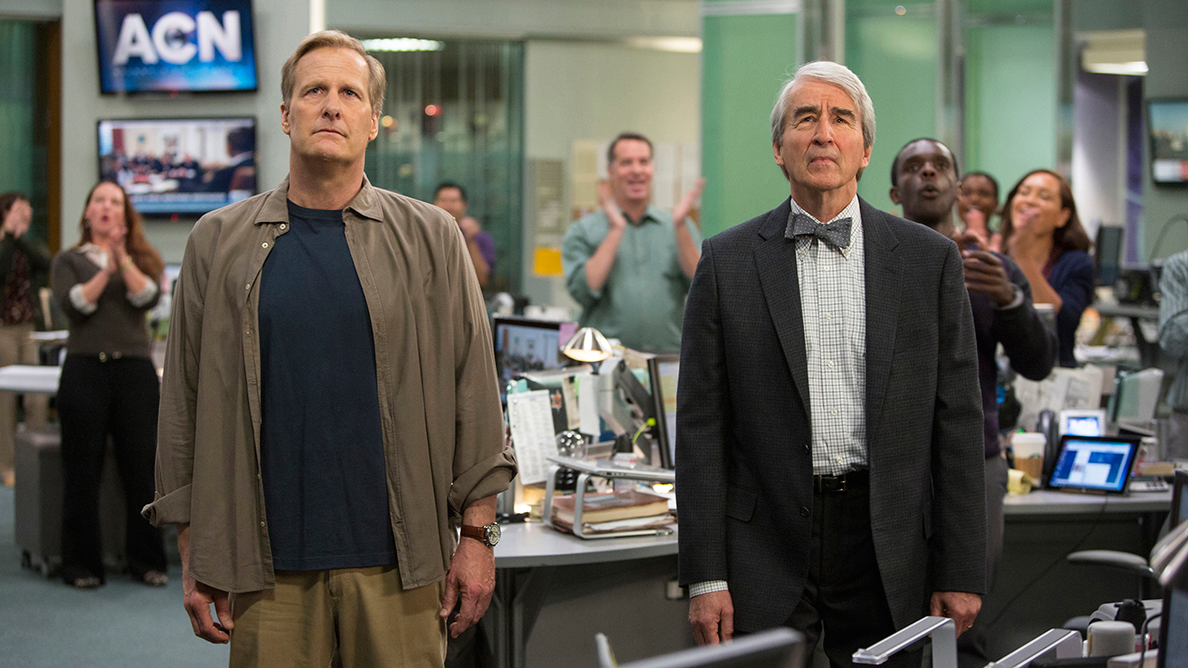 After my mother read my Newsroom piece from last week, she said, “You’re a mean man to Aaron Sorkin.” She’s not wrong. I’ve basically lost all sympathy for him, especially after the Keefer Catastrophe. But why? Why am I such a jerk to poor Aaron?

Watching most of Sorkin’s television work, especially his latest and perhaps last effort with The Newsroom, there’s a distinct feeling that something is being sold, foisted on you like bad advertising. It’s off-putting, and shamelessly transparent, particularly given how idealistic the whole thing is supposed to be. The notion that I should gladly buy the product — that it supposedly aligns with my beliefs — only makes me more skeptical, and more upset when the whole thing collapses.

I understand why I should, theoretically, like Sorkin shows, and I want to like them. But he just makes it so difficult. And that makes it all the more frustrating that “What Kind of Day Has It Been” came very close to doing the impossible — it made me, albeit extremely briefly, disappointed that this show is going off the air.

Sure, there was still a lot of typically annoying Newsroom stuff. Don and Sloan’s blame game with Charlie’s death was self-pitying — only tolerable because it continues to be a joy to watch Thomas Sadoski and Olivia Munn share the screen. And, of course, Jim continued to be an unbelievably entitled gasbag, telling Maggie what to do without considering the possibility that the woman he loved was a real person with her own goals. The fact that she made a single life decision for herself was treated as a huge victory.

After that throat-clearing, though, “What Kind of Day Has It Been” featured several small, genuinely weird, endearing moments, aided by the fact that, no matter the show’s other problems (and there were many), its cast was — and really always was — dynamite. I belly-laughed at Sloan’s intense scrutiny of Jim and Maggie, and at basically everything she said in the ensuing conversation. She was a great character. Gary Cooper, who had always hung around the fringes of the show, got maybe the best joke of the finale when he tried to convince MacKenzie to mess up her child’s education, just to see what would happen. Finally, Sorkin turned Will into a fully goofy dad-to-be whom pretty much no one took seriously (though I fear for his child). This is the kind of show we could have had if the characters had never been forced to do the news.

As far as episodes of The Newsroom go, the series finale is downright pleasant. It was hard not to get lulled into the mawkishness, particularly if you were dealing with the hate-watching-caused mixture of excitement and sadness over the series going away. (Sorkin has referred to this predilection as a “disorder.”) Everything got nice buttons: Will and MacKenzie are having a kid! Maggie is competent! Slon ride off into the sunset with Charlie’s magic tie! The target for a heartwarming finale is pretty big, so it’s unsurprising that “What Kind of Day Has It Been” hits it a decent portion of the time.

But the real secret of the Newsroom finale was that Sorkin finally pulled off a trick that the rest of TV has been using for years — make your hero look better, and more relatable, by pitting him against some terrible dudes. SAMCRO murdered people and ran guns, but at least they weren’t Nazis. Walter White was a meth kingpin who murdered people, but at least he wasn’t a Nazi. Raylan Givens shoots people wantonly and can be quite cruel, but at least he doesn’t run a gang of Nazis. (Maybe we should get past the whole Nazi thing.) Sorkin has spent most of The Newsroom trying and failing to find good villains — Don and Elliot, Leona and Reese, Jerry “Mustache-Twirling Fabricator” Dantana. In “What Kind of Day Has It Been,” Sorkin finds the only villain more terrible than Will McAvoy, and it’s not B.J. Novak, Kat Dennings, or even that grumpy Justice Department lawyer: It’s Ghost of Christmas Past Will McAvoy.

You knew Will was annoying when he was described as “the Jay Leno of news anchors” in the first episode of the series, but as he appeared in the flashbacks during the finale, he was absolutely unbearable. He lumbered around, being an asshole, saying things like “Weather rates” to Charlie, and “It’s a website. It doesn’t have integrity” to Neal. These statements felt like caricatures of things Sorkin has been criticized for doing.

Before The Newsroom started, Will was a cynical, unpleasant bore. When it ended, he was a somewhat competent drunk uncle who was a little too into the blues, getting battered around by everyone else on the show. The series had tried to do this before — this transformation from Great Man to Goofy Manchild — but was unable to make it stick until now. Either of those other versions of the character could have served as the basis for an appropriate, plausibly Sorkin-esque series: Will as either a villainous foil for his idealistic staff, or everyone’s ridiculous boss who makes a fool of himself at the ACN Christmas parties, getting roped into gossip about who was just boning in the control room and who was in True Love. Mostly, “What Kind of Day Has It Been” was about how we got from 100 percent evil Will to here:

Think about how the finale tried to reframe the series-opening monologue, widely and rightly reviled when the show premiered. Jenna, who still comes off as inarticulate (the worst sin for any Sorkin character), was supposed to be far more intelligent. She was merely framed in a bad light by Will’s Great Man perspective. At the end of that scene at Northwestern, Will says, “The first step to solving any problem is recognizing there is one.” So much of this last season of The Newsroom, and especially the finale, read as Sorkin recognizing that there was a problem with his own show.

When Charlie went to recruit MacKenzie (day-drunk at a bowling alley, because … why not?), she literally said, “Like it’s every little girl’s dream to make a man better at his job.” I almost fell out of my chair when I heard that. Of course, this was followed, during a moment set in the show’s present, with MacKenzie getting a promotion because she’s a woman, solely to solve Novak’s misogyny problem.1

And if Sorkin’s response to the controversy over last week’s train wreck was any indication, we might have Frustrating Sorkin to kick around for a while yet (unless he follows through on his hints that he will abandon TV). Instead of taking any responsibility for the upset that last week’s campus rape plot caused, or even trying to argue that Don was correct (thereby taking a stand), Sorkin copped out, claiming that people were unfairly identifying Don’s arguments with his own beliefs, and that he’d just tried so hard to get it right and raise questions.

Sorkin does identify with Will and the other men on the show. At the very least, he talks just like them. Take the infamous “Internet girl” story, where he told Sarah Nicole Prickett, “I think I would have done very well, as a writer, in the forties.” He went on: “I think the last time America was a great country was then, or not long after. It was before Vietnam, before Watergate.” Or the way it’s far too easy to imagine Sorkin’s op-ed on the Sony hack coming out of Will’s mouth, making it difficult to discern the distance between him and his blowhard characters. And it’s not like this is the first time he has “Who, me?”-ed his way out of criticism. Aaron Sorkin is right to say that it is uncharitable to identify characters with their creators, but his public statements have depleted our charity.

There’s nothing wrong with Sorkin’s screwball throwback. And there’s nothing wrong with his idealism. Really! A lot of the stuff in the flashbacks is endearing — MacKenzie failing at bowling, because why not? Or MacKenzie telling Charlie, “Haters gonna hate,” when he tells her as much. It was certainly less annoying than her total obliviousness to the fact that she was being used as a woman-pawn in a corporate power play. And Sam Waterston owns the episode as Charlie, in a time before he was cut down by the show’s worst musical moment since “Fix You.” There’s even a pretty good media criticism point about the idiocy of having campaign strategists butt heads over policy issues that they’re not informed to talk about, simply for the spectacle.

There are a lot of reasons people suffer from Sorkin’s supposed hate-watching “disorder.” But most of them don’t come down to writers being “hypersensitive” about their own portrayal (go make a list of all the entertainment featuring obnoxious, insufferable writers — I’ll wait). It’s because there’s the kernel of something good and legitimately enjoyable in there — the show we know we should, in theory, enjoy — and, instead of pleasurable, silly, slightly self-indulgent entertainment, it’s patronizing, corny trash. There’s something deeply sad and mesmerizing about the gap between those two things, and I’ll miss it, if only for a moment, next Sunday.

Throughout the finale, everyone keeps expecting Will to speak at Charlie’s funeral — to make a big pronouncement. “What Kind of Day Has It Been” is all about showcasing the Newsroom that might have been, where Will is a total oaf, and there’s as little grand, off-putting moralizing as possible — just the tantalizing possibility that he just might be quiet: “Every time I think of something, it’s reductive,” he tells MacKenzie. But, finally, inevitably, he makes the big announcement to the whole staff at the end of the episode. He can’t help himself. This is basically Sorkin’s M.O. — apologize and demur and pretend you’re not going to go into the infuriating spiel again, then wait until the last possible second and BAM! Sorkin claims he’s never coming back to television, but the worst thing about the end of The Newsroom is that if he does, there’s a possibility he’ll have me hooked one more time.