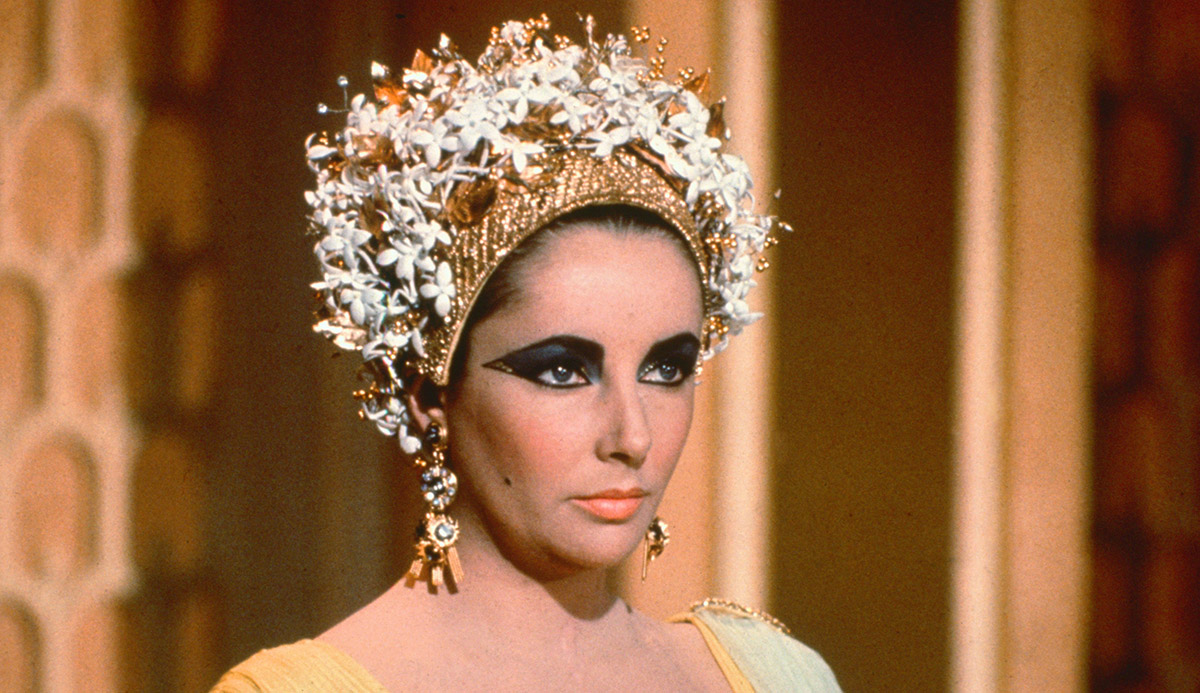 Through the chaos, revelations, and schoolyard name-calling cascading down from Sony’s hacked systems to the hyena pit that is the Internet, there is actual Hollywood development news: Angelina Jolie is still trying to make a Cleopatra movie! Though the ghost of Elizabeth Taylor’s notorious 1963 version haunts the emails of Oscar-winning producer Scott Rudin and Sony co-chairwoman Amy Pascal (in disseminated back-and-forths, the former frets over “destroying my career” over Jolie’s “camp event” and “a giant bomb … that any fool could see coming”), Untitled Cleopatra Movie could still one day become a reality, trouncing parallel attempts to dramatize the Egyptian empress.

Yes, that’s right: Jolie isn’t the only one trying to mount a Cleopatra movie. Steven Soderbergh was in on the fad. The man behind Transformers has his own ideas. And Lifetime is trying its darnedest. Here’s a look at just how long producers have been working to revive the Queen of the Nile for 21st-century audiences.

January 29, 2006: A New York Times feature on Soderbergh’s collaboration with Guided by Voices frontman Robert Pollard on the score for the director’s microbudget film Bubble offhandedly notes that the two will join forces again on a Cleopatra-themed musical. If you say so, fellas!

October 8, 2008: Oh, Soderbergh and Pollard weren’t kidding. News emerges that the Ocean’s Eleven director would actually shoot Cleo, a 3-D live-action rock musical based on the life of Cleopatra. Multiple sources agree that the project is “crazy-sounding.” Based on Cleopatra’s historically documented flapper-dance abilities, Chicago Oscar winner Catherine Zeta-Jones is courted for the lead role. Hugh Jackman is rumored to costar as her lover, Marc Antony. The musical, written by Guided by Voices bass player James Greer, will feature new songs by Pollard and adapt the band’s previously existing music with more applicable lyrics (imagine “As We Go Up, We Go Down,” but about pyramid building). Rumored to cost about $30 million, Cleo is expected to be one of Soderbergh’s most extravagant productions.

December 1, 2008: Soderbergh tells MTV that Ray Winstone will bellow in the Julius Caesar part in Cleo. The director refutes the idea that Cleopatra’s story has been transplanted to the 1920s — maybe those reporters were watching Chicago on TNT — and adds that the film is “like an Elvis musical in a way. It’s not serious. I mean it’s historically pretty accurate but it’s sort of like Viva Las Vegas meets Tommy.” Soderbergh announces he’ll shoot the film in April 2009.

January 1, 2009: The new year starts off with the worst news imaginable: Jackman is too busy to woo Cleopatra in Soderbergh’s film. Reports indicate that the X-Men actor bailed from the project over scheduling issues, despite not having a movie on his schedule that would actually interfere with Cleo’s production.

June 9, 2010: While promoting her biography Cleopatra: A Life, Pulitzer Prize–winning author Stacy Schiff teases to USA Today that she’d love for Jolie to play the Egyptian queen in a movie. And — surprise! — her book publisher lets it slip at the same promotional circus that Rudin bought the rights to the book in hopes of producing a star vehicle for Jolie. A little more investigation uncovers that Jolie’s involvement is more than just wishful thinking — she’s working with Rudin to develop the movie.

June 10, 2010: Outrage. Essence.com publishes a scathing retort to the Jolie-Cleopatra rumors, suggesting that whitewashing the Egyptian queen falls in line with Hollywood’s racial infractions. “I don’t care how full Angelina Jolie’s lips are, how many African children she adopts, or how bronzed her skin will become for the film,” Shirea Carroll writes. “I firmly believe this role should have gone to a Black woman […] What’s next? A biopic on Sojourner Truth played by Betty White?”

October 14, 2010: James Cameron becomes the front-runner to direct Jolie’s Cleopatra movie. Deadline reports that “the talks are serious,” with everyone involved using their sternest voices during negotiations. According to the report, Pascal is fast-tracking the movie thanks to Payback writer-director Brian Helgeland’s “brilliant script deserving of epic treatment.” The Sony bigwig refers to the project as her Gone With the Wind, adding that Jolie is a star who can open any size movie and “knows she was born to play this part.” That’s talking the talk.

November 4, 2010: “I am not doing Cleopatra. That has been decided,” Cameron tells Fox News’s Pop Tarts blog. Also, Fox News has a blog called Pop Tarts.

January 4, 2011: Rudin tells Deadline that he’s “pretty close” to pinning down Bourne Ultimatum director Paul Greengrass for the Cleopatra gig, which sounds pretty painful, depending on the producer’s wrestling skills. Explaining why the vérité-inclined director is a good fit for the project, Rudin says, “It is a completely revisionist Cleopatra, a much more grown-up sophisticated version. She’s not a sex kitten, she’s a politician, strategist, warrior. In the Joseph Mankiewicz movie, Elizabeth Taylor is a seductress, but the histories of Cleopatra have been written by men. This is the first to be written by a woman. It felt like such a blow-the-doors-off-the-hinges idea of how to tell it, impossible to resist. We’re pretty close. A lot of directors want to do it, but there is only a handful we’ll make it with.”

March 22, 2011: Without much fanfare, Greengrass’s name drops from the prospective Cleopatra directors list, only to see David Fincher’s take its place. Few details are available, with Sony bigwigs realizing that trumpeting their potential directors before they’re locked may not be the smartest move.

July 25, 2011: Soderbergh explains why Cleo has yet to become the “crazy-sounding” movie of our dreams. “It was one of those things, it was ready to go, we had the financing for it and everything, but there was only a brief window of time for it and we missed it,” the director tells the Playlist. Yet Soderbergh remains hopeful: “You know I really loved that script and I have thought about taking that to the stage. It could still live somewhere like that.”

November 15, 2011: Sony recruits Forrest Gump and Curious Case of Benjamin Button screenwriter Eric Roth to write a new version of the Cleopatra screenplay. Helgeland’s epic treatment goes out the window in favor of another epic treatment.

December 19, 2011: MTV corners Fincher for word on Cleopatra, and he is more than happy to explain what the movie won’t be: “I’m not interested in a giant sword-and-sandal epic. We’ve seen scope; everyone knows we can fake that. That stuff doesn’t impress in the way that it did even 10 years ago. We expect that from Starz [now]. So that’s not the reason to do that. What is it about this character that has purchased this place in our history and imagination that is relatable today?” A mighty Spartacus dis, Fincher.

June 15, 2012: Zeta-Jones appears on The View to promote another film musical, Rock of Ages, only to announce her hope to play Cleopatra onstage. While shooting Side Effects with Soderbergh, the two discussed adapting Greer’s script for the stage. “It’s a rock-and-roll musical movie, but we think it would just be fantastic on Broadway,” she tells Whoopi Goldberg.

August 10, 2012: With other Cleopatra projects aflutter, writer Michael Seitzman sells a Cleopatra television show to NBC, produced by Dan McDermott and Transformers and G.I. Joe godfather Lorenzo di Bonaventura. The script is described as “an epic romance set in a world of sorcery, gods and monsters” that picks up with Cleopatra after she “makes a sacred pact with a goddess to win back her throne, igniting a curse and an infamous love triangle that changes the course of history, forever ending the 4,000 year dominion of the Pharaoh.” Just like it really happened.

August 23, 2012: New York reports that Fincher has left Jolie and Rudin’s Cleopatra project. After The Girl With the Dragon Tattoo’s mediocre box office returns, the outlet speculates that Fincher’s shaky relationship with Sony could be the reason. Replacement candidates include Ang Lee, who will debut Life of Pi later in the year, proving that 3-D epics don’t have to be awful.

January 9, 2013: Confirming rumors that Jolie was eyeing him for the project, Lee tells The Hollywood Reporter he’s definitely, seriously, 100 percent considering making the movie. “I’m about to read the script,” Lee explains. The Crouching Tiger director says the Cleopatra movie fits right in his wheelhouse of doing whatever the hell he wants to do. “It just feels right to me after all the other types of films I’ve done. What does it have in common with any of them? They’re all totally different! That’s what makes this perfect.”

January 21, 2013: Murmurs from NBC executives make numerous TV reporters believe that Seitzman and di Bonaventura’s Cleopatra show is being reconfigured as a two-hour movie/backdoor pilot, in case it wasn’t competing enough with the feature-length projects evolving in parallel. Both men probably think Jolie would make a great Cleopatra.

June 2013: In an extended Magnet interview, Pollard reveals that, five years earlier, 22 songs were written and recorded for the proposed film. “I’ve heard the tapes. Sounds good,” Pollard says. They pulled out all the stops for the demos, even hiring Ziggy Stardust drummer Mick “Woody” Woodmansey. When Pollard considers the idea of turning Cleo into a Broadway show, he wonders aloud if Zeta-Jones isn’t too old for the part and if attempting a stage musical is even worth the trouble. “The thing about Broadway is you don’t get a bunch of money up front,” he explains before backtracking to imagine himself as the Andrew Lloyd Webber of indie rock. 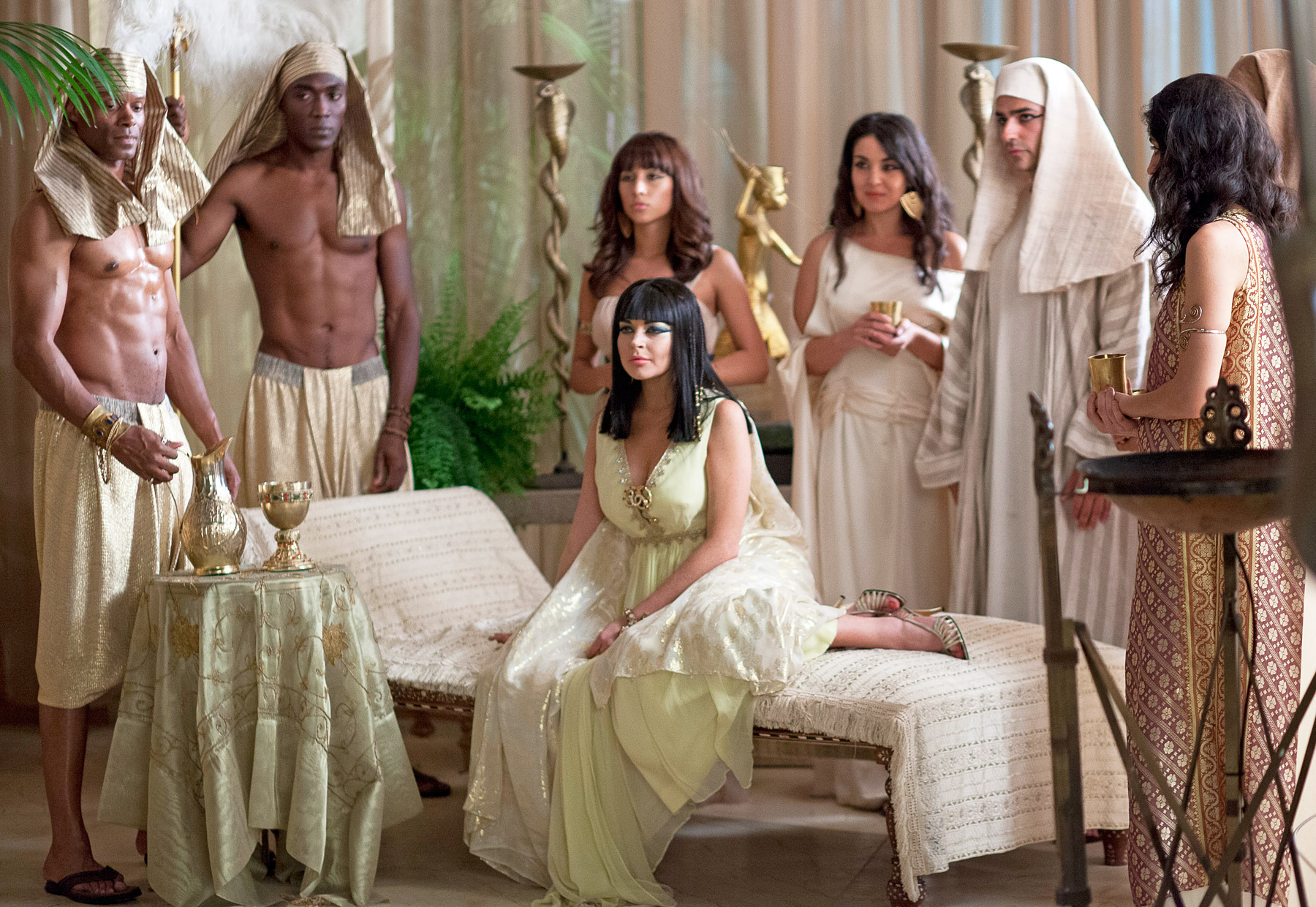 February 15, 2013: Timed not-too-coincidentally with the ratings success of Lindsay Lohan’s Elizabeth Taylor biopic, in which Lohan re-created scenes from the 1963 Cleopatra, Lifetime moves forward on a four-hour miniseries about the life of the Egyptian queen, written by Numb3rs creator Robert Port. This is in keeping with Lifetime’s new true-story strategy, which includes a Whitney Houston biopic, an Aaliyah drama, a Saved by the Bell tell-all, and now Cleopatra …

June 2, 2014: Making the press rounds for Maleficent, Jolie updates BBC Radio 5 Live on Cleopatra: Roth is still writing the script. Lee’s involvement looks less and less likely. And — sound the retirement alarms — the actress isn’t sure there’s anywhere to go but down after tackling the powerful historical character. “She’s complicated, it’s complicated to get this one right. I think we’re getting there. It’s getting close. I imagine the preparation for it is going to be big. It’s one of those that you think maybe that’s the one you put everything into and that’s where you end it, that’s where you finish — in a great way. What could you do beyond that one?” Maybe Cleopatra 2?

December 11, 2014: The Sony Pictures Entertainment email hack reveals multiple February 2014 correspondences referring to Jolie’s Cleopatra movie. Rudin takes a slightly different tone when referring to Jolie than he did when Cleopatra: A Life first hit bookshelves. Unless Cleopatra is known by Egyptologists as a “spoiled brat.” Then maybe the producer was complimenting his star once again.

We Went There: On the Ground at the Big, Sad, Strange Burt Reynolds Memorabilia Auction in Las Vegas