Aaron Sorkin on ‘The Newsroom’: ‘I Apologize and I’d Like to Start Over’ 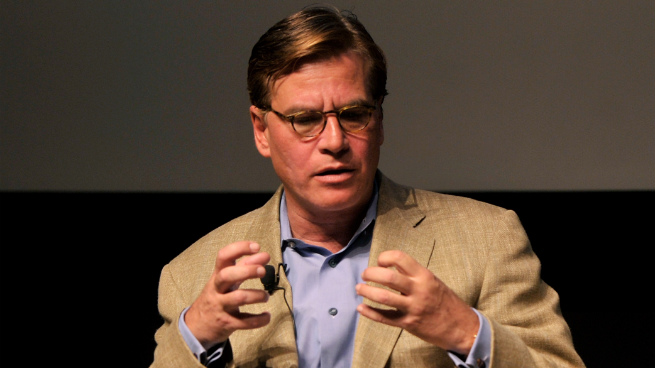 Apparently, The Newsroom has been a humbling experience for Aaron Sorkin. At a Tribeca Film Festival discussion last night, Sorkin addressed the crowd (and interviewer Jon Favreau), inviting them to “stand in for everyone in the world” and receive his sincerest regrets: “I think you and I got off on the wrong foot with The Newsroom and I apologize and I’d like to start over. I think that there’s been a terrible misunderstanding. I did not set the show in the recent past in order to show the pros how it should have been done. That was and remains the furthest thing from my mind. I set the show in the recent past because I didn’t want to make up fake news. It was going to be weird if the world that these people were living in did not in any way resemble the world that you were living in. … Also, I wanted the option of having a terrific dynamic that you can get when the audience knows more than the characters do. … So, I wasn’t trying to and I’m not capable of teaching a professional journalist a lesson. That wasn’t my intent and it’s never my intent to teach you a lesson or try to persuade you or anything.”

He wasn’t through: He likes to write “romantically and idealistically” while not entirely doing away with realism; he is not a savvy journalist (he just writes them for TV) and is not as clever or articulate as his characters; writing for television requires working at such a clip that sometimes quality is compromised just to make an airdate (“it’s kind of like a M*A*S*H unit … we just want to stop the bleeding”); and, perhaps most tellingly, Favreau is incorrect in his theory that writers are their own worst critics (“actually, I’ve got some evidence that I’ve got some harsher critics than me”). It’s strange to hear Sorkin express his wish for the first two seasons of the show to have served as a “preview period”; I, along with many other haters, found Season 2 to be much more palatable than the first. Its arrogance had become familiar enough to be charming at least some of the time, and it became easier to remember which white guy in a button-down shirt was which. The alleged mass firings in the writers’ room before that season only seemed to corroborate the idea that there was a single man with a plan behind it all, and that every belabored monologue and current event chosen from the archives of the near past had been weighed and measured to Sorkin’s total satisfaction before airing. Apparently not. The anchor was all swagger in public, but then he would retreat to his chambers to read the blogs and fret.

This is somewhat disappointing, because even if you weren’t on board with it, The Newsroom doesn’t really warrant an apology. Will McAvoys never say they’re sorry, but that is part of Sorkin’s point: His characters are his more self-confident mouthpieces, and probably the types of people who deliver all the snappy patter Sorkin (and the rest of us) edits into our interactions on the way home from parties. This is what creating a universe that takes place a year and a half or so ago affords writers: the ability to exert control over what has essentially just happened, to know a little more and have just a bit more time to do everything better and more eloquently. Even if it would be more fun to explore the fake headlines of Sorkin’s imagination than to revisit the Boston Marathon bombing (an episode featuring the event is filming in California, and it’s the first time Sorkin hasn’t been on set to oversee something he wrote), we know better than to expect him to get wacky. But when a show’s creator tries to clear up what he sees as a “terrible misunderstanding,” it seems like a perfect example of when to show, not tell.

Following the network assassination of Studio 60 on the Sunset Strip, Amanda Peet issued a postmortem suggesting a possible reason for the show’s demise: “I guess all together we seemed like this arrogant monolith, but individually, none of us felt very arrogant. So it’s kind of curious. Including Aaron [Sorkin]. The backlash, the vitriol. If it had been some 30- or 35-year-old new discovery instead of Aaron Sorkin, things might have been different.” Sorkin knows this better than anyone, but somehow it’s still difficult to receive smug dialogue warmly (when it’s not knocking your socks off, that is), just because you know it’s a facade and a stylistic choice. Aaron Sorkin didn’t dent your Mercedes, you just didn’t like his show. Or maybe you did, and now you’re wondering why he thinks you shouldn’t have.

The Newsroom has always kind of reminded me of SNL’s Drunk Uncle: a self-assured bloviator whom you at first avoid, then seek out just for a dose of that unique syncopated patter. It’s a different language, but easy to learn and fun to practice. Amy Schumer’s parody “The Foodroom” (“bestowed upon you by Aaron Sorkin”) was so close to the real deal that it might not have even needed the familiarity of Sorkin alum Josh Charles (Sports Night) to strike gold:

So why so Sorrykin? One of the best ways to fake arrogance is to pretend you’re building your own steep hurdles, so that each time you screw up it looks like you’re just executing a new move that was always part of your plan. In self-help speak, you “act as if” your flailing is intentional, that you are completely assured of your right to express and exist as yourself. It’s chaos, being a regular human being whose sharpest comeback or moving speech always occurs to you five minutes too late. Sorkin provides a haven to which you can escape, and even if you find yourself uncomfortable in the particular surroundings he’s created for any number of reasons, he’s provided something so recognizably orchestrated that you could spoof it in your sleep (dreaming of walking briskly down a hall, propelled by ambition and Americanos). The recent past of The Newsroom is just that — past — and it can’t be punched up, because it’s already been eaten by our DVRs and minds. Sorkin has entered the overlapping sweet spot of arrogance and love: never having to say you’re sorry.

Ask the Maester: Answers to Your Questions About Tullys, People Beyond the Wall, and Sexual Customs in the Kingdom