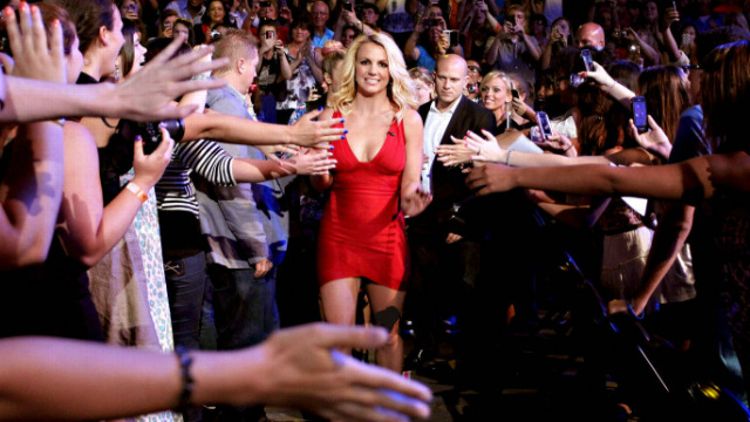 The X Factor spaceship blasted off last night with a heavily medicated Britney Spears lashed to the windshield like a gut-shot trophy buck. And although Idol broke our faith and left us curled up on the floor of the Grantland offices, Lisanti and I decided to sign on for another season of singing competitions. Why? Well, you know when you were a kid and your friend peed on one of those low-wattage electric fences and you peed on it, too, because that friend was going to call you a gigantic pussy if you didn’t? That was Idol. But remember when your friend looked at his watch and said, “Internet porn still hasn’t been invented yet, so what should we do with ourselves?” Remember how this lack of meaning led you and your friend to pee on the electric fence again? That’s X Factor. This time, we’ve brought along Emily Yoshida, who will hopefully provide moments of levity and intelligence to the Kang and Lisanti Pee-and-Electrocution Show. Long live Emily Yoshida.

We will be reviewing four performance videos per week, one for each of The X Factor’s categories — Boys, Girls, Groups, and Olds. We will also be bringing you up-to-the-minute Britney analysis. Sound simple enough?

But let’s start off with some advice for The X Factor. First, when you front-load a singing-competition show with 45 minutes of potentially dramatic story lines, the message you’re sending to the audience is that you just don’t really have that much talent onboard. When you try to force us to care about something as weird and Humberty as the “sexual tension” between Simon Cowell and Demi Lovato, it means your product has been stepped on and diluted as thinly as Facebook’s stock. And when you ask three otherwise hopeful, well-intentioned, and bright-eyed bloggers to stick with you for however many months, you should make sure that at some point in the first 120 minutes, at least one note has been sung in tune.

Every audition last night came with its own little story, none of which were particularly interesting. One very pretty girl had a kid whom she cared about. Plus this girl was being totally bullied by a blonde girl from Texas and her horrible sister, who, of course, ended up being terrible at singing. Then this floppy-haired Bieberite kept getting told that he looked like Justin Bieber. Then some bros had been friends for a long time. And all sorts of other boring shit that tried to cover up the fact that none of these very dramatic and sad people could sing at all. The phrase “lipstick on a pig” comes to mind. As does the phrase “we’re in for a long season.”

So, on that cheery note, let’s get started. —Kang

Kang: Call me a shitty cynic, but the day the anti-bullying campaign extends itself to a singing competition on Fox is also the day every “It Gets Better” videos gets trivialized. I’m sure Jillian Jensen went through some horrible times in high school, but it’s a little bit hard to swallow her vague sob story when 15 of her friends run up onstage to hug her. I’ve lived on this earth for 32 years and if you added all my friends up, including kids who were forced to sit in the same crib as me when I was a toddler, I think you’d get to nine, maybe 10 friends. Could her life in high school really have been that bad? FIFTEEN FRIENDS?!?!? When you invoke the word “bullying” (with no explanation) and some sad pianos play and Demi Lovato kinda prisses up her face and says, “I can hear your pain,” it doesn’t mean Fox gets to pretend like it is curing the world of everything bad that has ever happened to anyone.

Yoshida: If there’s one thing that’s worse than evil, it’s evil and incompetence. C’mon, bullies of America, step up your game! If your victims are to be believed, then you are letting way too many of them graduate high school with apparently enough confidence to audition for reality talent competitions. Anyway, sob stories aside, I’m really not sure how strong of a singer Jillian is, what with all the, well, sobbing (Yeah, your Grantland X Factor team are all terrible, soot-hearted monsters; I guess it’s best to get that out in the open sooner rather than later), but I’m pretty positive she wasn’t better than Quatrele, who I’m willing to bet has suffered through a not-insignificant amount of ridicule and prejudice in his life, and who the judges certainly weren’t afraid to talk about like a subhuman curiosity before throwing a novelty pass at him.

Lisanti: If I go last on this one, the two of you will look like the unfeeling monsters, right? I hate bullies like you. That girl has the voice of a sobbing angel and the heart of a champion.

I also would like to take this opportunity to get on the record how appealing I found Demi Lovato. Still no idea who she is, but she’s going to be good on this show.

Kang: Will not start the season by insulting a 13-year-old.

Lisanti: You guys should see the horrifying e-mail Kang sent me during this harmless little Bieberling’s performance. The inviolable principle of Editorial Privilege discourages me from sharing it, but I feel that I’m allowed to say this much: The phrase “I want to shave his tennis-ball Bieberhead with a prison commissary cheese grater” may or may not have appeared in that message. I won’t elaborate further because anything I say may be used to extend the protective range of the restraining order Eben Frankewicz took out against Jay for using this forum to speculate repeatedly about the anatomical origins of his falsetto.

Emily? Consider this your “jumping-in” ritual for the gang. Draw blood or you’re on Mike & Molly recaps through Season 8. And I’m blocking the thesaurus.com pages for all synonyms of “fat.” Should be easy; you’ve already bullied one kid tonight.

Kang: I drive down to Huntington Beach two or three times a week to go surfing. Let me give you a little heads-up on what it’s like: Every house is “Spanish-inspired,” everyone has a yacht, every kid surfs better than me, everyone drives some truck-SUV hybrid, there are about 10,000 Starbucks, there is a Mexican-Italian fusion restaurant called Que Pasta. I don’t think there’s a single pothole in the city and the biggest drama in Huntington Beach’s history has come from its 100-year war with Santa Cruz over which city has the right to call itself “Surf City USA.”

Emblem3 exemplify everything about Huntington Beach. They are blunted-out, dumb, garish, and maddeningly good at what they do. They, like their hometown, are a hateful synthesis of everything terrible about Southern California — pavement, chain restaurants, unexplained wealth, enviable self-confidence, Pennywise, Sugar Ray, and floppy, greasy blond hair.

So, before seeing the rest of the auditions, I’m going to just go out on a limb and say they win the whole damn thing. Of course they’re going to win.

Lisanti:Couldn’t agree more. If you could somehow distill everything that’s simultaneously awful/wonderful about Southern California, blend it up into a smoothie you chugged down while riding your longboard to a medical marijuana dispensary to pick up a lollipop made up of Purple Ass-Splitter (a full-body indica high with base notes of genital-tingle, not a cheap, skunky head buzz), that Emblem3 song is what would be playing in the shop. Because Emblem3 would actually be in the dispensary with their guitars and turntable, having bogarted their dads’ pot cards and talked their way past Dr. Bodie Feelchill, the on-site herbal healing specialist. And you would be pretty cool about it, because you’d ask Wesley, “Hey, is that a Sublime b-side?” and he’d be all, “No way, bro. Original.” Then everyone would forget what they were nodding with grudging respect about and just enjoy the sweet tune.

Yoshida: I think these guys live in the apartment above me. They spend all weekend wailing John Mayer covers out the window and chest-bumping in the driveway while crossing paths to and from the laundry room, and they call me “Em” with an obnoxious level of familiarity which almost makes me feel bad that their tanned, board-short-wearing uniformity has kept me from actually learning any of their names. I almost didn’t recognize them here on X Factor, what with the fact that they were actually wearing shirts for once (TANK IT, BRO). But now that I have, I will confirm Kang and Lisanti’s suspicions that they are just un-self-aware and blindly confident enough to win the whole thing. Oh, and I’m still going to go out of my way not to learn their names. God Bless You, Emblem3, and God Bless California.

(It’s also possible that Emblem3 are not my neighbors, and I really just can’t tell SoCal bros apart. Yeah, I know.)

Yoshida: Lisanti has made the executive decision that the NBC television program The V—- does not exist as far as Grantland is concerned, but I’m gonna have to bend the rules for a moment just to note that the reunion of Don Philip and Britney Spears was like the X Factor producers seeing former Mickey Mouse Club member Tony Lucca audition before Christina Aguilera on the last season of … that other show, and saying “Let’s do one of those, but with more of a general ‘suicide watch’ feel to it.” Yeesh. So nice to have your life-destroying, apocalyptic song-and-dance back, XFUSA.

Lisanti: If you couldn’t decode any of that, you’re welcome, America.

Kang: I’m with Emily here. I’ve had enough of these reunions where one very successful person has to confront the one who didn’t make the big time. And I’ve had more than enough of something I call “GIVE ME MY DREAMS BECAUSE I’M OLD AND I WANT IT SYNDROME.” If you are over 30, unsatisfied with your life, and prone to violent fits of hysterical crying, it doesn’t mean you deserve a change in life. It just means you’re like pretty much everyone else in America right now. The percentage of Americans who do not grow up to be Mariah Carey is well over 99 percent. Only Mariah Carey is Mariah Carey. (She built that.)

Kang:
(All GIFs by @HeyBelinda)

Why did Britney borrow Heather Locklear’s hair and wardrobe from 1999?

Lisanti: Oh, I know the answer to this one! On the last day of shooting on Melrose Place (in 1999!), Heather Locklear, while watching “Baby, One More Time” (also 1999!) in her trailer between setups, immediately began assembling a time capsule for Britney Spears consisting of a spangly blouse and some extensions ripped out in an epic, pivotal catfight with Sydney. Even then, watching the dawn of an important but obviously soon-to-be-tragic career, Locklear sensed that the half-clothed girl gyrating on her television would probably one day need a decent shirt and some replacement hair.

I’m pretty sure this is how Locks of Love got started. Locklears of Love. Sorry, I’m still high off the Emblem3 fumes.

Yoshida: Kang, you forgot the most important part of that outfit:

You know how Paige was like “Britney is a hot momma and a pop star, just like me”? Everyone has a reason they can relate to Britney, and after 13 years, I finally found mine: those glasses and that laugh.

Jay Caspian Kang tries to surf like two or three times a week.
Mark Lisanti thinks this Demi Lovato person is going places.
Emily Yoshida has already ordered those glasses from The Britney Collection on Zappos.com.