Black Mirror, Episode 3, ‘The Entire History of You’: Total Redo 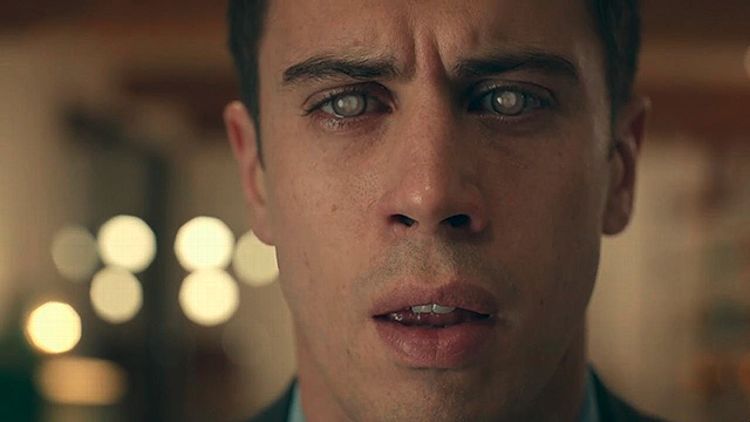 For six weeks, I will be responding to the British sci-fi series Black Mirror, which originally premiered on Channel 4 in 2011 and is currently making its debut on North American television via DirecTV. These are not meant to be strict recaps, but there will be plenty of spoilers, which, trust me, if you plan on watching the show, you do not want.

So have you taken your name off the Google Glass wait list yet? “The Entire History of You” may be the most well-known installment of Black Mirror, not only for RDJ’s stamp of approval, but for how emotionally immediate and prescient it feels (shockingly enough, “You” originally aired more than a year prior to Glass’s unveiling). The episode is much more minimal than the first two, taking place in the stark, modernist interiors of several isolated country homes over the course of what appears to be 24 hours, mostly through conversations between two people. It could almost be an Off Broadway play. It feels like a more human story than what we’ve seen so far, but this is only a means to draw you in close enough to see the most minute ways a single piece of technology has poisoned what otherwise should be a normal marriage, and by extension, the culture at large.

You spend a lot of “The Entire History of You” checking your own gut reactions, because you of course know how logical a progression the Grain is from the quickly encroaching Glass. We’re on the cusp of a huge turning point as human beings; our ever-more sophisticated life-augmenting technologies have been knocking at the door of our physical forms for a while now, and it seems we’re starting to warm up to the idea of letting down that formerly sacred boundary. Fifty years in the future we may be waxing nostalgic about how great iPhones 1-5 were because you could put them down if you wanted.

A couple weeks ago in my response to “The National Anthem,” I brought up the hacktivist mantra that “information wants to be free.” Aside from the questionability of granting information rhetorical free will, my other bone to pick with that idea is that it implies that there is some Platonically ideal future in which everybody knows everything about everything, a.k.a. the Singularity. Now, I am one of those weirdos who believes that something like a Singularity is inevitable, but I would hesitate to call it an “ideal” any more than the erosion of a mountain over millennia is “ideal.” It’s about as meaningful as saying “sediment is affected by gravity,” but there aren’t people out there making it their life’s mission to help granules down a mountain slope. The Singularity, or whatever our next societal evolution is, will probably happen more through laziness (“Dialing numbers on a keypad is HARD! Why can’t I just push one button instead?” “Sending my vacation photos to each of my friends will take FOREVER! I guess I’ll just share them with the world instead.” “But I don’t WANT to stop playing Candy Crush!”) than activism. “Information wants to be free” is a statement that places value on the presence of information, without accounting for the high value of what we don’t know — how the negative intellectual space gives shape and shade to the positive. Yes, we should probably educate ourselves about science and history and world cultures to the best of our ability before we die, but how helpful is it to do the same with our own lives?

The information that the characters in “The Entire History of You” willingly expose themselves to and bury themselves in is unnatural, even revolting to us, even as we sit reading archived emails from relationships gone south or sift wistfully through photographs taken with people who are no longer alive. (MORE ON THAT NEXT WEEK! Get excited!) Several hundred years ago it would have seemed unnatural, even revolting, to be able to recall emotional triggers with the clarity we are capable of today. But still Liam burrows into a toxic sludge of images and sounds he would not have had access to were he born one hundred years earlier, all the while repeating “I need to know, I need to know,” as if seeing his wife’s act of infidelity is something brave and necessary. But just because Liam isn’t in the incriminating redos doesn’t mean his urge to see them aren’t symptomatic of massive self-involvement, something that goes beyond navel-gazing and selfies into a self-feeding cycle of myopia.

As dark as that prospect is to us now, it does fall under the category of something one subjects oneself to, as opposed to harming others with, and the great thing about living in a free society is that you can put your psyche through whatever perverse tortures you can devise and nobody can stop you. But “The Entire History of You” also alludes to a separate issue in the infinitely spoked problem wheel of the Grain: the fact that everyone you know and interact with essentially becomes a surveillance camera. All your worst moments can be found and bookmarked by anyone who was there to witness them, and invariably passed on to those who were not. The Grain is not just used for your own personal utility — though you can certainly use your redos as leverage for arguments, like a particularly nasty evolution of the dispute-solving Wikipedia look-up — it is scanned by potential employers and airport security for suspicious activity and interactions. Compound that with the ability to zoom-and-enhance and lip-read just about anything and I think we may actually have the first logical inconsistency in Black Mirror thus far: I simply don’t buy that any human living in the world of “The Entire History of You” would ever leave their house. Or maybe I’m once again underestimating our ability to adapt; maybe other people would become more open-minded about the things we’ve always kept secret, maybe we’d be more forthcoming. Maybe the only thing that would truly have the ability to offend us would be someone who opts out of this informational potluck, like Hallam, the woman who Jonas spends the night with after the dinner party. There’s an easily missable moment in the fight scene at Jonas’s house the next morning after Liam smashes him over the head with a vodka bottle. Hallam emerges from the bedroom, awakened by the noise, then runs to call the police. But off-camera, we can hear her struggle on the phone with the operator, who refuses to send help because she does not have a Grain to scan, and is therefore untrustworthy. (We are told sex workers usually opt out of the Grain as well, further shading of the implications of such a choice.)

Like “The National Anthem,” “The Entire History of You” exhaustively examines all the repercussions of an extreme (to us) situation in a surprisingly short amount of time. But besides its central domestic disaster, there is one other subtle implication that I found to be the most chilling: the complete absence of film, television, and music. And it seems like an accident of the script at first until you think about it: Why would we watch someone else’s made-up story when we have our own fascinating lives to pore over in HD? Why would we watch even the most addictive reality show when we’ve got our entire childhoods behind our eyes to rewatch and rehash and overthink? Why would we bother to learn about anything outside of our immediate circle of experience when our friend is showing us the deterioration of his carpeting?