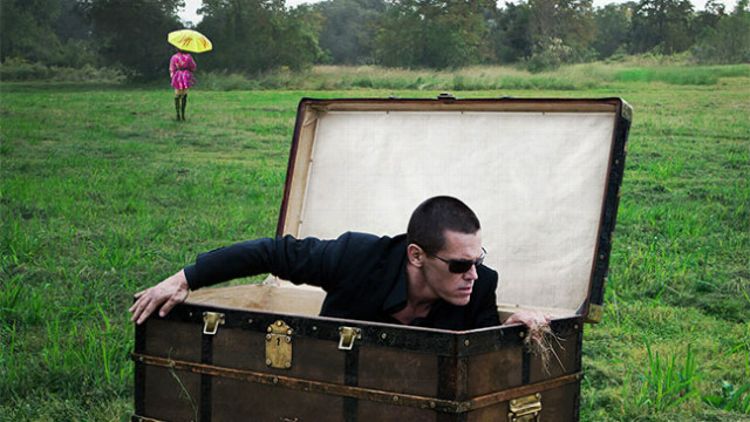 After dinner, after football, you’ll want a movie. Here are four options.

Everything is wrong with Lee’s version of Park Chan-wook’s notorious, super-violent super-action-thriller. For one thing, it’s far from super. Not the quality, per se (although, for Lee, that’s off, too), but the energy. Park’s movie lunged and charged at you. This one doesn’t muster that same relentless forward motion. A sleazy suit (Josh Brolin) wakes up one day and finds himself locked in a room. He doesn’t know why. But he does a lot of sit-ups and yoga. Twenty years later, he’s set free, climbing out of the sort of Louis Vuitton trunk you’d find in a Wes Anderson movie. Dressed in a nicer suit, the man searches for his captor, his daughter, and answers: Did, for instance, he actually kill his ex-wife? He winds up slaying lots of men, with a hammer, a bat, and his bare hands.

Park’s movie, from 2003, had both a maniac charge and psychopathic precision. He meant every broken bone, every instance of impromptu dentistry. Violence was the film’s diseased currency. It was gross, but it meant something. And you never lost sight of the larger existential mystery: Into whom does all this killing make this man? Lee’s interpretation features an impressive warehouse brawl between Brolin and dozens of goons. Lee shoots in a long shot, with few cuts. It’s the most delightfully directed, humorously choreographed sequence in the movie, with Brolin as a homicidal Gene Kelly. It’s also another moment that makes you wonder where that Spike Lee musical is.

Otherwise, this Oldboy, which Mark Protosevich has rewritten, drags along. The existential questions are better applied to Lee: Who is this man with the sudden interest in empty grisliness? I’m guessing that it’s a director daring critics (in the press, in the audience) to attack him for the tools to heads and the slicing of necks. Lee hasn’t been shy in complaining about Quentin Tarantino’s easy comfort with blackness, with his audaciously vulgar use of Samuel L. Jackson in his movies. Jackson and Lee haven’t done a movie since Jungle Fever in 1991. Oldboy is a thankless reunion. Jackson spends a couple of scenes in loudly colored, funky clothes (think Cameo) and a strip of hair across his bald head. He smokes and curses up a storm, not as the villain (that would be Sharlto Copley, whose soft menace is memorably creepy), but as his helper.

Why not celebrate the reunion with a better part? Jackson’s treatment here feels like a punishment for defection. And the movie feels like an encroachment upon Tarantino’s Asian action turf. But there’s none of Tarantino’s geeky movie glee — and little of Lee’s, just a trudging obligation to see the movie through. You can’t say that about any of his nonfiction work in the last decade — it’s alive. The best we get here is a strange poster of a grinning bellhop (it’s Lee’s younger brother Cinqué) that hangs in Brolin’s cell and some winking production and costume design.

With the arrival of the nasty explanation for Brolin’s suffering, you realize you don’t quite care. Park wanted his finale to nauseate you more than the physical violence did. That was cartoon stuff by comparison. Lee’s movie should be appalling. It’s defensive instead, playing catch-up both to its superior source material and to Tarantino. Most appalling is that Oldboy isn’t even called a Spike Lee Joint. That makes sense. It’s karaoke. 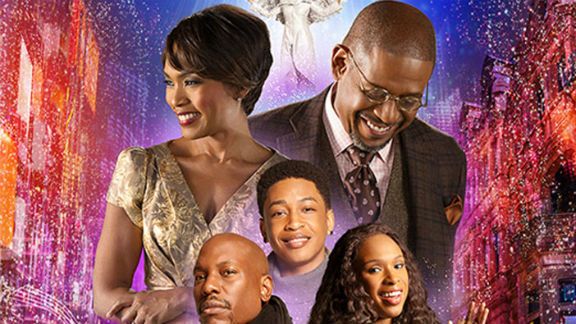 This musical means well (it’s very vaguely based on Langston Hughes’s yuletide gospel pageant). But from the opening minutes, things don’t bode well. We go from an apartment eviction notice to a mother (Jennifer Hudson) altruistically shipping off her teenage son, Langston (Jacob Latimore), to Harlem and her estranged, churchy parents (the Reverend Forest Whitaker and Angela Bassett). On the bus, he sing-raps with Nas. When he arrives in New York, a Jaden Smith look-alike steals his backpack, which had all his cash. His phone is dead, too, so he enters a hotel to call his grandparents, who are looking for him in Times Square. A guest has left his wallet on the counter and, yes, Langston considers picking it up and taking it. Instead he hands it to its owner, but he winds up in jail anyway — next to Tyrese, who asks: “Langston. Like the poet?” Says Langston: “You know it.”

This is the first 15 or 20 minutes. But all of Black Nativity proceeds with sort of clumsy obviousness. Whitaker is full of lectures about Hughes and full of guilt about his daughter, who winds up belting a number in front of foreclosure signs. There are family secrets here that you can see coming before the movie is even partway over. You don’t feel good about being a half-hour ahead of everyone. But the movie has the kind of earnest badness that starts to hook you. Langston belts some numbers with a sexy homeless couple. He hits up Tyrese for a gun. As he pieces this together, he sings, “Did my birth destroy my family?” Hudson can afford a cab from Times Square to Harlem that cost more than her bus fare. And for a couple of scenes Mary J. Blige wears a big yellow wig that makes her look like an expensive dessert. At least once there’s a fantasy in which four characters partake in a hard-luck sing-off.

The actual nativity pageant, as narrated (and sung!) by Whitaker, feels like something new — well, it feels like one of Ms. Grant’s numbers from Fame. But it gives Lemmons a chance to do some filmmaking. The pageant is Hughes’s material (it played Off Broadway in 1961), and you don’t know why it’s not the entire movie. It’s as if she couldn’t secure good funding without the ghetto-bourgeois tension. At some point, Latimore even throws his mother a tantrum that more or less asks, “You had me living in Good Times when I coulda been a Huxtable?”

Lemmons has also given Samuel L. Jackson two of his more memorable roles — as a leering daddy in Eve’s Bayou and as a homeless, dreadlocked violinist in The Caveman’s Valentine. Jackson’s not here, perhaps because he has cut down on the number of mistakes he can make in a week. You want the best for Lemmons. She’s an independent filmmaker who seems to have to fight to keep working. You even want the best for this movie. There would appear to be redemption once the entire cast fills Whitaker’s church with a gospel version of Stevie Wonder’s As. But the same song in the same setting is also the emotional climax of Best Man Holiday. Only one makes you laugh. 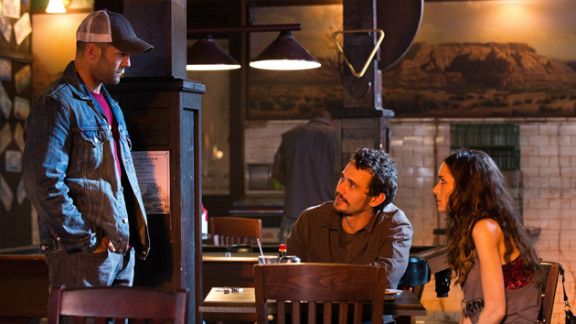 When you see Fleder’s name, you know you’re in for an evening of trashed-up thrills. He has made the good kind (Kiss the Girls), the icky (Michael Douglas in Don’t Say a Word), the trendy (Things to Do in Denver When You’re Dead), and the Grisham (Runaway Jury). This new movie might be the most inane. It has Jason Statham as Phil Broker, a former undercover narcotics detective living a new life as a carpenter in Louisiana. He left the force after a drug raid went action-movie crazy and killed a kingpin’s son. The imprisoned father (Chuck Zito) gets wind of Broker’s new location, more or less courtesy of a small-time dealer that James Franco plays.

Obviously it all climaxes with Statham unleashing a Home Depot–load of hurt — a toolbox to the head, a ladder to the face, a hammer not quite as imaginatively deployed as in Oldboy. No, I don’t know what accent he’s using here, but Statham can still turn motion into magic. But when it’s not clobbering time, the rest of the movie feels like a production you couldn’t even get a WWE wrestler to agree to. The screenplay is by Sylvester Stallone, and its mumbled plot suggests that it might have been dictated more than it was typed. You don’t know what anyone’s motivation is for anything — neither Kate Bosworth’s skeletal mother-junkie nor Winona Ryder’s fit ex–”biker skank.” Not to mention the anonymous, absurdly armed dudes who come looking for Phil and his daughter. It’s that kind of movie.

It’s also the kind of movie in which everyone uses profanity as if it had just been legalized. This film features the worst cursing I might ever have heard, and it must account for a quarter of the dialogue. Another quarter consists of characters screaming “Broker!” the way Principal Rooney growled “Bueller.” It all ends in a hail of bullets and flying workmen’s boots. I can barely remember who lives or dies. I barely cared. 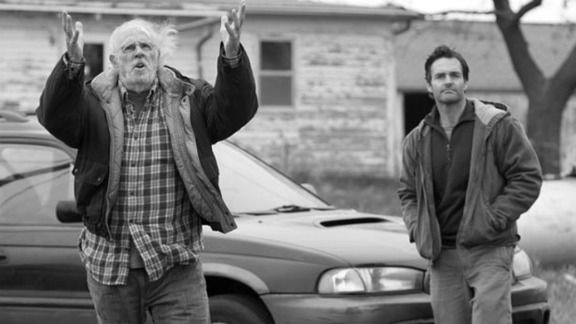 A delirious old war veteran named Woody Grant (Bruce Dern) attempts to walk from Billings, Montana, to Lincoln, Nebraska. The occasion is the million dollars he’s told he has won in a sweepstakes. Woody’s wife, Kate (June Squibb), and his younger son, David (Will Forte), know there’s no money. But David reluctantly agrees to drive him, while Kate makes an embittered fuss. The film becomes a journey in pictures, but an unusually frill-less one. No one learns a lesson. No one hugs.

The tall tales, one-liners, and complex blend of Midwestern good nature and anomie are from Bob Nelson’s screenplay (his first). What Payne lends is a sense of menace and melancholy that, after About Schmidt, Sideways, and The Descendants, feels bracingly new for him. The cynicism is sugar-free — there’s no Kathy Bates or Hawaiian vistas to alleviate the air of lamentation. Nebraska was shot in color, then drained of it, so that the landscapes and long faces appear stark in black-and-white.

The movie has its moments of comedic nonsense — the Grant boys spend a few days in Woody’s hometown of Hawthorne, where Woody’s twin nephews scheme to get the money. But the insinuations of Stacy Keach, as one of Woody’s old buddies, and Squibb’s brassy, blunt approach to exasperation mar the comic-strip outlines. Forte is also a surprise, making David a perfect blend of his parents’ resentment and compliance.

Is Payne mocking Woody and, by extension, the Midwest? Is Dern’s acting recessive or simply blank? The deft achievement of this movie is that it has a hardness that doesn’t delight in the meanness of mockery as the Coens often do. Dern, meanwhile, does nothing Method-actor flashy, nothing Dern-like. Woody could be one of the war vets Dern played decades ago: aged, calcified, demented, checked out. Another filmmaker would have softened the blow of the trip and found a bit of redemptive magic and made the film an elegy for a dying way of being a man, for a dying way of being an American. Not Payne. He’s strictly declarative here. Those ways are dead, and this is the eulogy.

Black Mirror, Episode 3, 'The Entire History of You': Total Redo