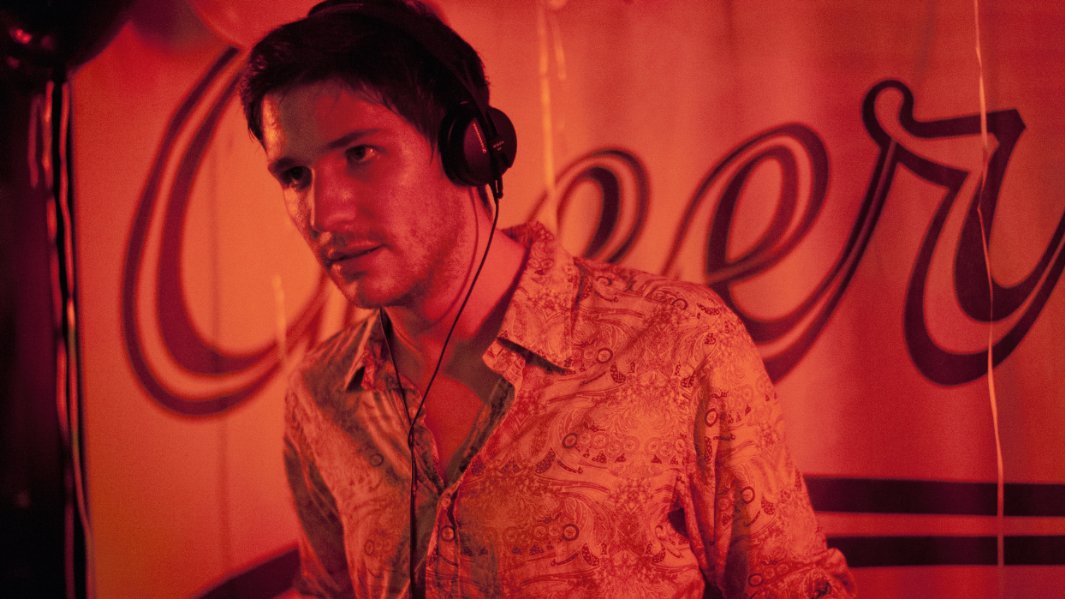 The protagonist of Mia Hansen-Løve’s Eden is a Paris house DJ named Paul (Félix de Givry), who forms half of a duo called Cheers that advertises its shows with its name done up in the TV show’s famous font. The movie follows 20 years of Paul’s lackadaisical life: bending over to snort cocaine; punching the air from behind the deck of a turntable; the women; the travel; the unbearable lightness of being broke. The movie, which opens Friday, doesn’t have anything big to say. It starts in 1992 and presents Paul as unlucky and only vaguely talented compared to the two guys in his music circle who go on to become Daft Punk (or two actors playing Daft Punk’s de-robot-ed selves).

Hansen-Løve wrote this movie with her brother Sven, who had reasonable success as a DJ, and they seem to trust us not to be too hard on Paul, even though de Givry doesn’t do much as a performer. He’s just nice. The movie runs for more than two hours and, since Hansen-Løve has opted for naturalism, niceness doesn’t get you terribly far. Neither do the handful of biggish names assigned to smallish parts. Greta Gerwig and Laura Smet, for instance, have a couple of scenes as Paul’s girlfriends. At one point, Gerwig sits superimposed on the right side of the screen and recites her character’s goodbye letter to him. It’s among the film’s two or three nods to visual poetry.

The rest of the time, the camera watches the crowds jump and shake below the DJ booths and observes the doings at nightclubs. Every once in a while, the dance floor will blissfully erupt to sing the chorus of, say, “Promised Land” by Joe Smooth. Moments like that impart a sense of what a good remix can do — even if in all my years of being around house music, no one’s ever shouted aloud the chorus to anything. The eruptions tend to be more corporeal: The bodies shout. But you get Hansen-Løve’s point. The whole experience is a rush for the dancers and the DJ.

What else does she want to do here? She doesn’t want to make a music video. She doesn’t want to inhabit or personify the songs the way Sofia Coppola or Alejandro González Iñárritu would. The prevailing style is curiously detached. The case being made is either almost academic or strangely literal. We don’t see anybody dancing to Frankie Knuckles’s “The Whistle Song” — there’s just a shot of a record spinning as it plays. Surely that warrants a trip to movie jail. But the entire film is predicated upon a kind of artistic modesty. It’s not about music or genius or rhythm per se. It’s about Paul and his friendships and sex life, how he treats his late father’s savings and his predictably disapproving mother (Arsinée Khanjian) like an ATM.

I don’t love Bertrand Bonello’s Saint Laurent, a flamboyant yet banal biography of the French fashion designer that was released in the U.S. earlier this year and has a bit part for Brady Corbet in common with Eden. But Bonello captures what it is that fashion can do so powerfully for a woman: allow her to discover herself. I watched Eden eager for a similar clap of thunder. The closest the film comes is a dinner scene that begins with Paul and his friends listing their seminal house records. I’d hoped the oysters they were slurping would’ve primed them for raptured enumeration. Instead, we get two songs before someone changes the subject to one character’s misery.

After four features, Hansen-Løve has become something of a specialist in romantic flightiness. Her previous two films — 2009’s Father of My Children and 2011’s Goodbye First Love — were elliptical, marked by travel and instability and barely-there endings. But they also had emotional complexity. Eden is the least of the four. It doesn’t stir up anything, and none of the actors is much to watch, even the ones you’ve heard of. She loses something crucial in the nightclubs and PS1 parties — control of the characters, the physical motion, the story — that’s never made up for in the kitchenettes and bedrooms. Still, there’s something inarguably, humanly sad about Paul. His success is small and obscure, and by the standards of the people in his life he’s a professional failure; the movie doesn’t pretend he isn’t. A woman gives him a book of Robert Creeley poems (The End) that seems to speak to him more deeply than any song we hear him play. But the years in this movie don’t really amount to much. It’s stuck between disco shallowness and grown-up wisdom — like a turntable, it’s spinning endlessly. 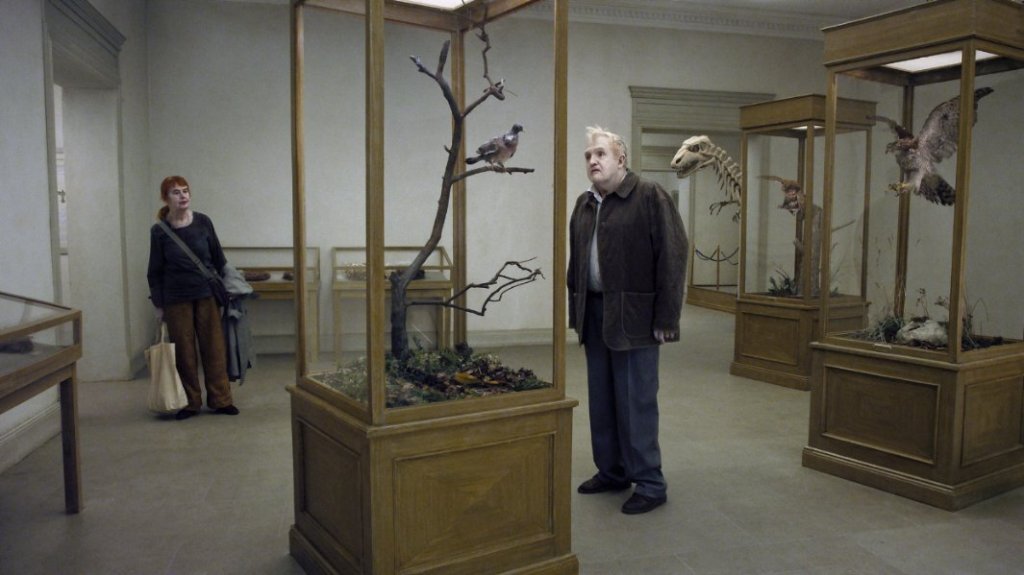 There are two kinds of laughter in a movie theater: yours and the rest of the audience’s. Hopefully, they meet up. When they don’t, the difference can be entertaining, and hearing people crack up at Roy Andersson’s A Pigeon Sat on a Branch Reflecting on Existence is part of the enjoyment of the film. The rest comes from Andersson’s idea of what comedy is. The film is a series of short scenes — I counted 39 — of varying length and significance, set in the Swedish port city of Gothenburg.

In the opening bit, a mildly disheveled man stares into a museum case at an inanimate bird on a tree branch. His wife stands near the exit, holding a bag, staring at him. On an album this would be the title track. In a certain kind of book it’d be the thesis. With Andersson, it’s an existential joke: What is the point? He asks this question throughout the film, often through the deadpan banter between a pair of gag-toy salesmen, named Jonathan (Holger Andersson, no relation to Roy) and Sam (Nils Westblom), who are drowning in the quicksand of just-past middle age. Every couple of scenes, sometimes for a few in a row, we see them drink together and argue with each other and hawk extra-long vampire fangs, joke bags, and a rubbery mask they call Uncle One-Tooth. Their stated mission is to bring the people entertainment. But they work in a slow, muffled style that counteracts their entrepreneurialism. Their version of entertainment feels a lot like death.

The whole movie feels both dreamed and purgatorial. Some characters are staring out of windows before they keel over. Some are staring out of windows maybe wishing they could. There are only a tiny handful of shots in which the camera is outside looking up at characters gazing out or standing on a balcony. One of those features a man and a woman smoking. They appear to have just had sex, which means at least one of them has probably just experienced “the little death.”

Roy Andersson has directed tons of commercials, but this is just his fifth movie since 1970, and his third since 2000’s Songs From the Second Floor. These movies, along with 2007’s You, the Living, comprise a grand trilogy of life in the face of death. He works in a flat theatrical style that favors wide shots of entire rooms that are half-populated with half-alive actors. When someone barks a put-down, starts to weep, or breaks gloriously into song, you really have to search the frame to find the source of the sound. He’s put a lot of the cast in cadaverous opera makeup and has some of them soliloquize while facing the audience, away from the rest of their colleagues. If you’ve ever wondered, What if Ingmar Bergman directed Upright Citizens Brigade? then Andersson is the director for you. He actually fits within a more modern, comedically oblong European tradition that includes Finland’s Aki Kaurismäki and loosely extends to Hungary’s great Béla Tarr and Russia’s Aleksandr Sokurov.

Two of Andersson’s scenes are masterpieces of time-wrinkled staging that rival moments in Sokurov and Tarr. They’re both set in an immaculately undecorated, modern-day harborside tavern invaded by a fully decorated ancient royal army of a boyish king, whose retinue assails the patrons with pomposity and a giant mare. The king would like both a glass of water and the company of the wide-eyed young man standing behind the bar. Andersson’s playing with scale and the comedy of the inexplicable. The scene goes on long enough for scores of soldiers to make their way past the windows of the bar (here’s the drum line, here are the riflemen, there go the gentlemen with the spears). It’s not just that one era has crashed into another, it’s that Andersson has nested one style of painting within a completely different style. Doing this once is astounding. Twice seems above and beyond the call of artistic duty.

There are visual motifs and spoken motifs. Some of this is helplessly, laugh-out-loud funny. Some of it is merely amusing. Not all of it is meant to be either. The final phase of the film is called “Homo Sapiens,” and it’s grim. One scene features a monkey appearing to be electrocuted while a woman in a lab talks on a cell phone (she’s staring out of a window; the monkey stares at us). In another, black slaves are herded into a big copper barrel by students with brass-instrument horns. You’ll have to see why for yourself. But it’s one of the most damning metaphors for the history of Western civilization I’ve seen. Some directors make tableaux vivants. Andersson does the opposite: tableaux morts. They simply feel, in their clammy, funereal way, just as alive.

Filed Under: Movies, A Pigeon Sat on a Branch Reflecting on Existence, Eden, Reviews