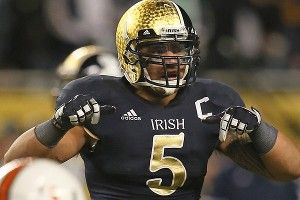 Let’s run down the top 10 games, reveal your perfect Saturday, and keep things quick, breezy, and noncommittal, like the cool person at a party of nerds.

Before facing USC in the final game of the year, Notre Dame has to beat Pittsburgh, Boston College, and Wake Forest to preserve an undefeated record. These are three games the Irish should win, no doubt. But somehow, some way, old-school Notre Dame would lose one of these. Since the David Gordon kick, there’s been a medium-to-heavy curse lingering over South Bend, and it seems to be most effective when the opponent is weak. The common wisdom this year is that the defense is too strong to allow a letdown of these proportions, but is it true? Or will the curse find a way through the alleyways of fate and deliver another loss?

First, Virginia is 0-4 in the ACC. Second, State just lost a rivalry game to UNC on a last-minute punt return when head coach Tom O’Brien elected to play for overtime and got burned. Third, I want you guys to read this thread about O’Brien from Pack Pride, a State message board, which started in the immediate aftermath of the loss (the language is not clean). This is what we in ACC country call a powder keg.

Urban Meyer’s undefeated Buckeye spectacular gets top-10 billing every week as long as the wins keep coming. I know it’s illogical, but I’m somehow convinced that he could find a way to beat Alabama. Urban knows the way.

Oregon State became a little bit irrelevant in the grand scheme when they lost to Washington last weekend, but they still control their own fate in the Pac-12. The same can’t be said for Arizona State after a loss to UCLA, but if the Sun Devils win the rest of their games, including a road trip to USC, you have to imagine they’d be conference championship–bound as well. In a top-heavy week, this counts as intriguing.

Do you guys realize that if the season ended today, the Big Ten championship would be Nebraska vs. Wisconsin? And then, under the rules of the world, one of those teams would go to a BCS bowl? To play Louisville, or someone? None of this can be legal. And as you ponder the injustice of it all, read this blog about how Indiana might sneak into the Big Ten title game.

In a weird way, this game will tell us a lot about Alabama. Until last week, the Tide hadn’t really played anyone. Then they beat Mississippi State, but the problem there is that MSU also hadn’t played anyone. If A&M can win big here, there may be hope for the rest of the Alabama-opposing universe. If not, we will continue to live in abject fear of the Crimson Swarm.

Tech’s success under Tommy Tuberville this year is one of the most fun stories in college football, and they’ll have a great argument for “best team in Texas” status with a win over the Longhorns.

The Kleinapple Express is now traveling at maximum speed, bowling over everything in its way. Collin Klein is the Heisman favorite, and in a conference with no championship game, this may be KSU’s last big obstacle between them and a title game.

Oregon has yet to face a tough road test against a team that can score at something approaching their impressive rate, but they’ll find a willing foe in USC. Can anyone stop the neon juggernaut? If Kiffin & Co. lose, they can look at this game as preparation for a potential rematch in the conference championship game.

This is all I’m going to say about this game: If Alabama loses, there’s a chance — a chance — that we could have our first national championship game without an SEC team since USC-Texas in 2004-05. Now ask yourself, who should you be rooting for?

Use remotes and computers to aid you on your journey.