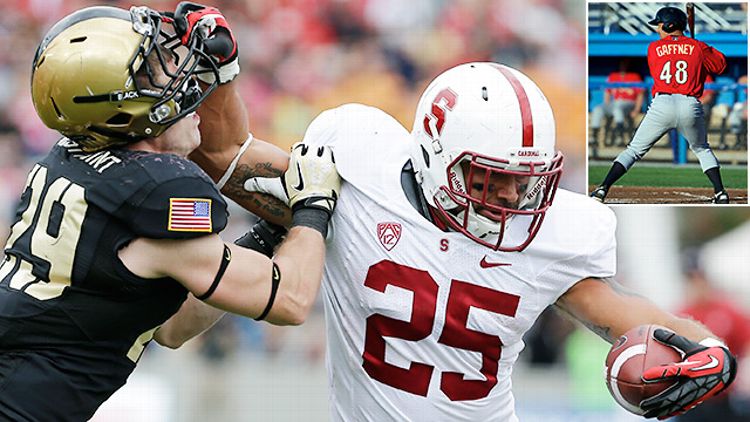 Who Is He? Stanford running back Tyler Gaffney.

Where Is He From? San Diego, California (Cathedral Catholic).

Years Played: He played three years of college football at Stanford (2009-11) before taking a year off to play pro baseball; he returned to school and the Cardinal in 2013.

Follow the Bouncing Ball: A quick Gaffney timeline: He appeared in all but four games during his first three seasons with the Cardinal. His most productive season (2011) saw him record 449 rushing yards, 79 receiving yards, and eight total touchdowns. He was also a three-year starter for Stanford’s baseball team during this time, and following the 2012 MLB draft, Gaffney announced he was forgoing his final year of eligibility in favor of going pro in something other than football.

Then, this April, after a year as a minor leaguer for the Pirates — a year in which he hit .297 and stole 11 bases, but watched Stanford win the Rose Bowl as a spectator — Gaffney announced his intent to return to school, finish his degree, and play one final season under David Shaw.

So Why’d He Come Back? “If possible, I think it would be great for every football player to experience being a fan for a snippet, just to see it from the outside. I was standing on the field right next to all the players. But I’m wearing street clothes. They’re in the game. My heart’s beating. The intensity’s there. But he’s not calling my name to go in.” — Gaffney to Ivan Maisel

His Game in 25 Words or Fewer: If you like Stanford’s endless parade of burly nerds barreling downfield while holding footballs, well, here’s another one.

Bio Tidbit: Gaffney’s inspiration for two-sport success at Stanford is a guy you might have heard of: current Minnesota Viking and former Cardinal foot- and baseballer, Toby Gerhart.

Anytime you talk about FIFA, you talk in a British accent.

Half the time I put deodorant on just to lube up the pits.

Is He Related to Julie Gaffney? Julie Gaffney is a fictional character, so we’re guessing not. But there’s no real harm in imagining that in addition to balancing his pursuit of a degree and an extracurricular load that included first two amateur sports, then one pro sport, then one amateur sport again, Gaffney roams campus after dark solving local mysteries with his plucky kid sister, Julie The Cat.

Should We Know Him? It’s too soon to tell, but this weekend should be a solid indicator, one way or the other. In his first go-round with the Cardinal, Gaffney never got too many touches, which is a natural side effect of being teammates with guys like Stepfan Taylor. Fast-forward through his year away, and through the first two games of this season, and Gaffney has already passed the halfway mark to besting his 2011 season rushing mark. Gaffney totaled 74 carries the season before last; September’s not even over, and he’s already at 40 in 2013. He ran for 104 yards against San Jose State, and 132 against Army, and he already has four touchdowns: three on the ground, one a catch.

Speaking of catches: “San Jose State” and “Army” are the key words here; Week 4’s matchup against Arizona State, the only pairing of top 25 teams this weekend, should give us a much better idea of what to expect from Gaffney and Stanford this season. The Cardinal’s leg of the elbow-throwing race to the crowded Pac-12 summit begins this Saturday, with the Sun Devils paying a call. ASU surrendered 231 rushing yards to Wisconsin last week. Stay tuned.