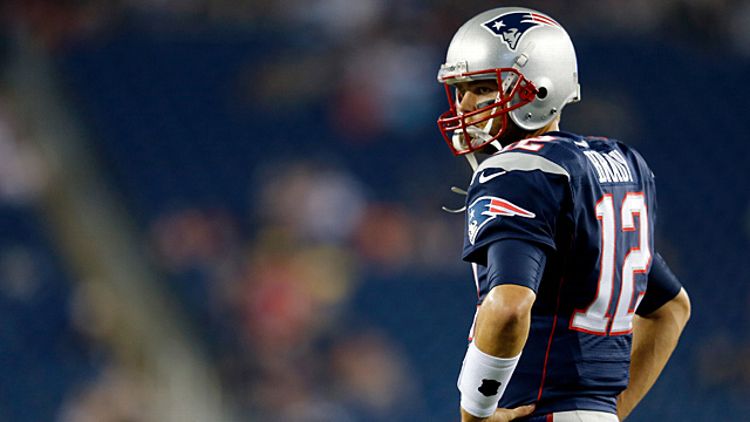 I’m not saying the NFL takes itself too seriously, but there’s this video called “Bledsoe to Brady: The Hit That Changed History” on its website. There’s no question that when Mo Lewis leveled Drew Bledsoe in 2001, it changed the course of one professional football team’s immediate future, but history?! C’mon, man!

It also changed the future of Tom Brady. He quickly evolved into one of the most successful and most tactically proficient passers in the league’s history. Over the past decade or so even those who spend their free time stabbing Brady voodoo dolls have to admit that when Brady and the Patriots offense are firing on all cylinders it’s one of the great sights in sports. Well, that’s not happening so far this year, and even the biggest Pats fans have to admit that these last two games have been tough to watch.

New England enters Week 3 at 2-0, but it’s probably the ugliest, and perhaps the softest, 2-0 in the NFL. That awful “win” against the Jets last Thursday was like one three-hour-long butt fumble. The Patriots offense is struggling as it tries to replace very reliable pass targets with new, unproven ones. Brady’s pass chart for the first two weeks reveals some of the issues. 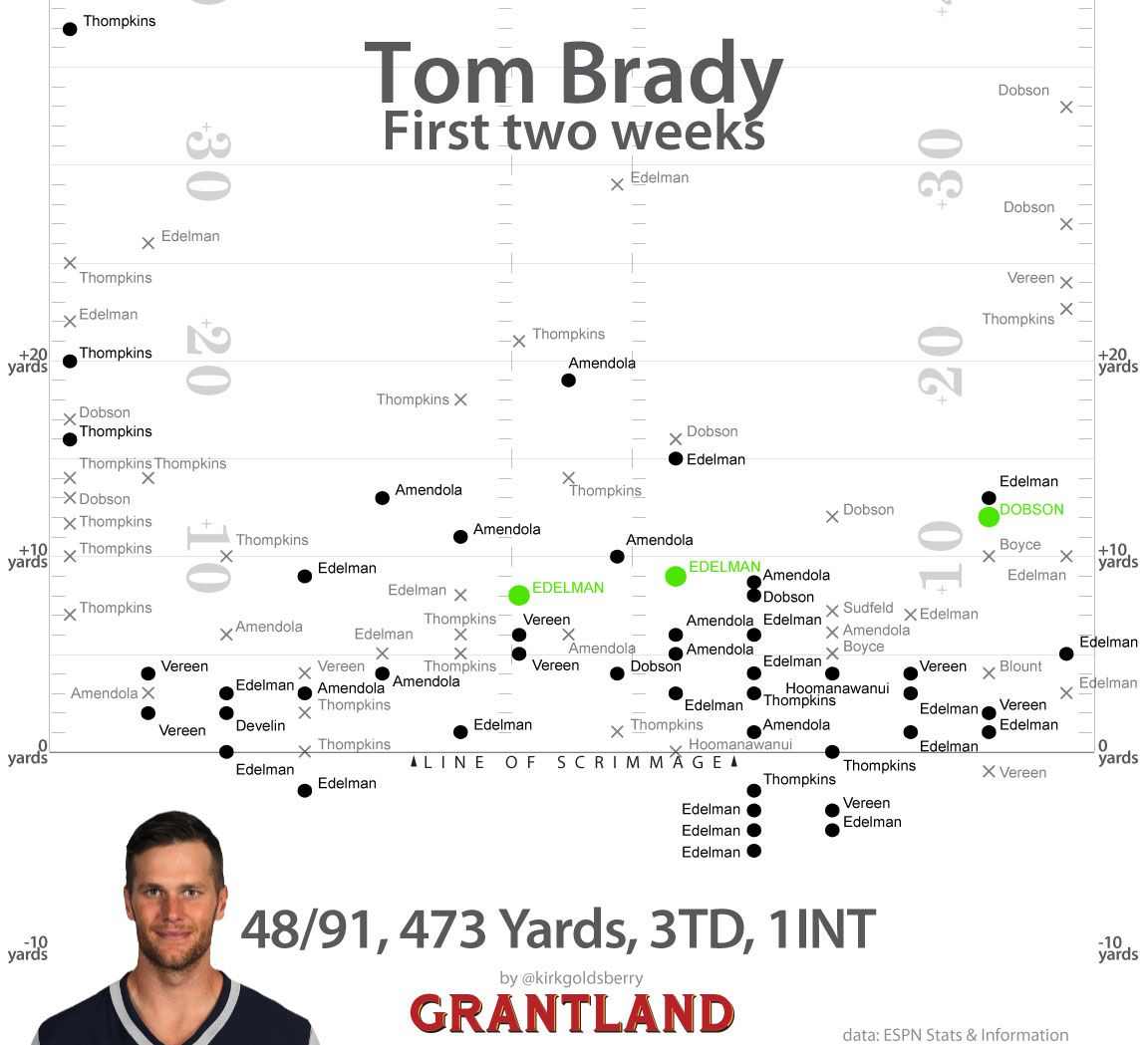 (Green dots are touchdowns, black dots are completions, and X’s are incomplete passes.)

Last season, Brady led the league in short passes targeting the left side of the field. Early this season, however, his directional tendency has flipped; he is targeting the right side a lot more than the left. His favorite spot thus far in 2013 has been between the right hash marks and the right-side numbers. In fact, Brady has been very effective over there, frequently connecting with his most reliable targets, Julian Edelman and Danny Amendola, in that area.

But short throws to Edelman and Amendola haven’t been the problem; everything else has. Brady is a combined 30-for-41 when he targets Edelman and Amendola; conversely, he’s a dismal 9-for-31 when targeting his rookie wideouts, Aaron Dobson and Kenbrell Thompkins. Much has been made of the Pats’ inability to incorporate these two young players into their offense, but we also have to acknowledge that when Brady targets Dobson and Thompkins, those throws are often more difficult in nature. In general, Amendola and Edelman work the shorter passing zone, and Dobson and Thompkins work deeper down the field. We should expect lower efficiency on those types of throws, but still, the chart shows those attempts deep down the sideline have been unusually ineffective for Brady and the Patriots.

Brady’s inability to stretch the field is reflected in some other numbers. Last season his average completion targeted a receiver 6.6 yards down field and garnered 5.5 yards after the catch. This year, those numbers are 5.6 and 4.3, respectively. So not only is Brady having trouble generating long completions, his receivers aren’t generating as much yardage after receptions. Taken together, the average Tom Brady pass is much less valuable this year than ever before. Brady’s yards per attempt has been above 6 his entire career, and last year it was 7.58. So far this year it’s 5.2.

Should Patriots fans be freaking out? Yes and no. The samples are small, the numbers are clearly down, but the list of reasonable explanations is quite long. First of all, there has been a major personnel upheaval in Foxborough and Brady is building new relationships at almost every receiving position. Second, injuries to Rob Gronkowski, Amendola, and Shane Vereen have eliminated or limited three of the Pats’ most reliable targets.

New teammates mean new strengths and weaknesses, and the fact that Brady is throwing right so much more this year than last indicates he is trying to adapt to his new partners. It remains to be seen how good or bad this offense will be — a two-game sample is obviously insufficient. Still, the early signs undeniably point to growing pains in New England, especially downfield.