Lightning Round: The Ty Lawson–to–Houston Deal 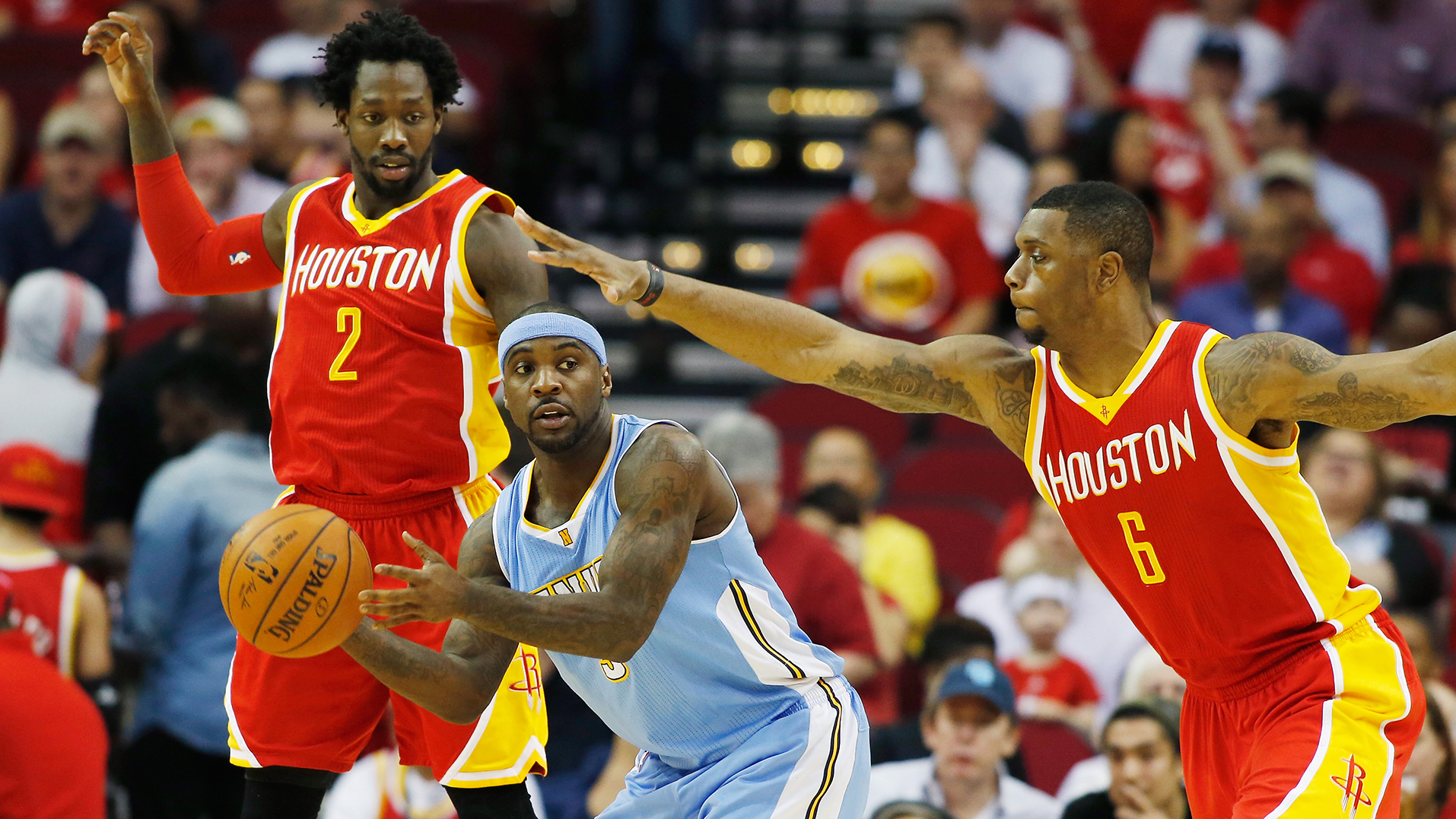 Late Sunday, Ty Lawson (and a second-round pick) was traded from the Denver Nuggets to the Houston Rockets for a gift bag of interesting young pieces and crafty veterans, including Pablo Prigioni, Joey Dorsey, Nick Johnson, Kostas Papanikolaou, and a first-round pick. Our basketball staff gathered around the summer campfire to warm their hands and give their takes.

Andrew Sharp: One of my favorite high school basketball stories involves Ty Lawson. He was in high school at Oak Hill Academy with Michael Beasley, and the two of them had a bet to see who could sign their name on the most school property. But Lawson knew there was a line. “Ty was smarter than I was,” Beasley remembered in 2008. “He’d sign on bedposts and places that wouldn’t get him in trouble. I signed staplers, ceilings, doors, water fountains, bathroom stalls. Everywhere.”

It culminated when Beasley had a meeting with school officials to discuss his commitment to staying out of trouble. The next day, they noticed Beasley’s signature on the principal’s car.

Beasley won the bet. He also got kicked out of school.

The point is, there are lines in life that only a special kind of screwup will cross. Now Ty Lawson has approached a line of his own. One more mistake and even hopeless believers like me will have to write him off.

And if this is Lawson’s last chance, going to Houston is a great start. This is so much better than life in Sacramento, playing on a slightly different version of the Nuggets. Off the court, he’ll be in close proximity to John Lucas, the NBA’s de facto recovery expert, and maybe that’ll outweigh the allure of the Houston nightlife. On the court, he’ll share the ball with James Harden, and he’ll have Trevor Ariza, Corey Brewer, and Patrick Beverley around to help him on defense. The Rockets will be competing with the top of the league from day one.

This deal was a win for Houston, and it’s probably a win for Denver, but most of all it’s a win for Ty Lawson. He’s got the best second chance possible, and a chance to show the world he’s not Michael Beasley.

Let’s see if he can prove it.

Jason Concepcion: Man, this dunk seems like it happened a million years ago.

I just want to say that if Vin Baker thinks you need to look in the mirror, you need to chain yourself in front of a mirror and put those Clockwork Orange eye-speculums in to hold your peepers open.

It’s a great, low-risk, high-reward deal for Houston. Because, of course it is. I wouldn’t be surprised if Daryl Morey has some kind of troubled-asset actuarial table that he can quick-reference for situations such as this. Let’s see: Take a 27-year-old point guard with a sub-6-foot modifier and substance abuse problems, multiply by Houston nightspots, carry the Bun B … that equals four players — two scrubs, a young scrub, and a young potential scrub — and a protected first-rounder.

I totally agree with Sharp: This trade is, as they say in the biz, a win-win. Houston obviously gets Lawson, who, if he can get himself together, is an excellent player who might be in decline, but whatever — the Western Conference never sleeps. Denver wins by turning the reins over to rookie Emmanuel Mudiay, who was last seen killing Vegas summer league. Yeah, it’s summer league, but it’s always better to kill than be killed. 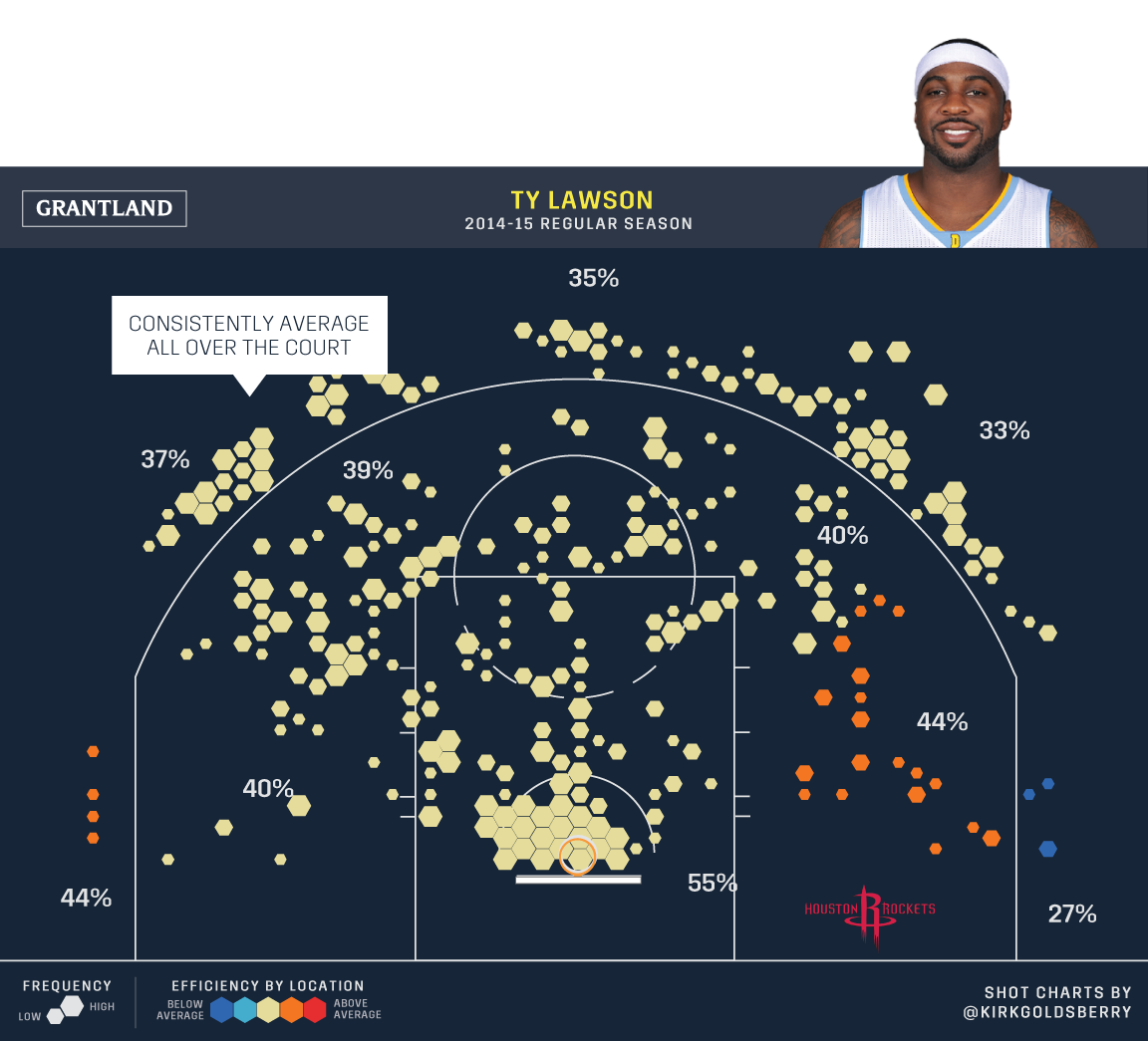 Kirk Goldsberry: Lawson might be the quintessential point guard in the NBA right now.  He makes plays, drains 3s, attacks the paint, and knocks down pull-up jumpers. The problem is, he does all of those things at normal levels. There’s nothing really noteworthy other than the normality. He has no signature move; he has no hot shooting area. His shot chart from last season is almost entirely yellow, indicating that, while he’s active in all the right places, he converts his shots at league-average rates in virtually every spot. Still, he’s a 15-and-10 guy, a huge offensive upgrade, and, paired with Harden, Dwight Howard, and the rest of the Rockets, his usage rate will almost certainly decline, which could spark upticks in his efficiency as a shooter and as an attacker. Interestingly, he will immediately become Houston’s most active midrange shooter. It will be fascinating to watch how his elbow game shifts now that he’s in the land of Morey.

Danny Chau: Factoring in the circumstances that fed into the organization’s need for a change, it’s incredible that the Nuggets managed to obtain the haul they did. The crown jewel of the trade on their end is clearly the lottery-protected first-round pick the Rockets will almost assuredly forfeit in 2016. It will be a low pick, but that the Nuggets were able to extract a first-rounder in the first place is kind of amazing.

The Nuggets are now well equipped to rebuild for the future, with a potential of four additional first-round picks coming down the pipeline in the next three seasons from Memphis, Portland, Houston, and the final parting gift from the Carmelo Anthony trade in 2011 — the right to swap first-round picks with the Knicks in the upcoming draft, though it might not come to that, since we have no idea how well this upgraded Knicks roster might fare in the despicable East. 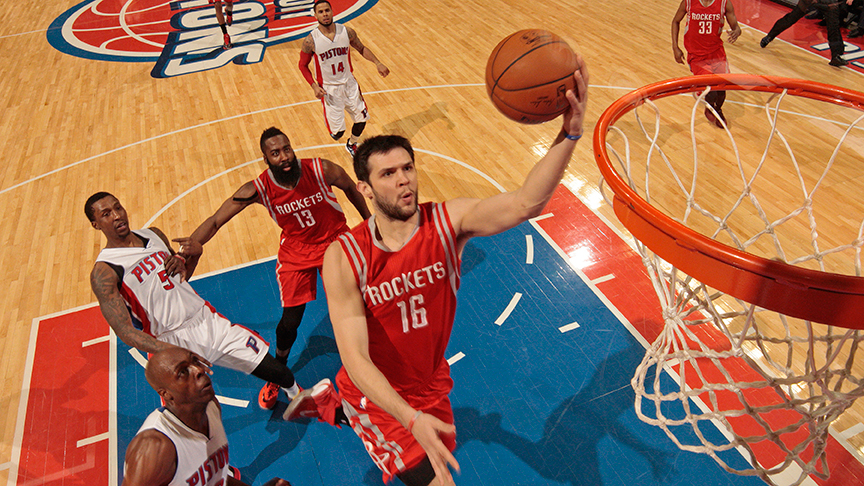 B. Sevald/Einstein/NBAE via Getty Images

Playoff God Pablo Prigioni is as good as gone, since it’ll cost the Nuggets a measly $440,000 to waive him before his 2015-16 salary guarantees later today. Similarly, Kostas Papanikolaou has a nonguaranteed salary of $4.8 million if he isn’t waived before October 4, as noted by Marc Stein. That might be a tougher decision for the Nuggets, who still have several multipositional weirdos that led the franchise to 57 wins in 2012-13. Big Papa is a master-of-none player whose role with the Rockets never got any larger than a nine-game stretch from mid-November to early December when he averaged nine points on 47 percent shooting, four rebounds, and three assists a game. He won’t move the needle, but he’s a solid all-around player who could prove to be a decent role player. He also seems like a good dude. He’s slated to make about as much as Kyle Singler this season if he’s retained; I’m not sure Singler is better than him.

There’s even less to go off of with Nick Johnson, but that’s fine, since he’s probably the third-stringer at point guard anyway. He’s a guy you can use to fill in at either guard spot in a pinch and throw in to apply full-court pressure for a few minutes should there be any injuries up the ladder. He’s 6-foot-3 with a long wingspan, but with the kind of weighty athleticism you’d see in a big man like Andre Drummond. Developing a 3-pointer will keep him in the league.

But to be honest, if there is only one player kept on the roster, I pray it’s Joey Dorsey. Have you seen the episode of Planet Earth in which a polar bear takes on an entire colony of walruses? That could be Dorsey and Jusuf Nurkic during every single practice this season. And Mike Malone has basically confirmed he won’t be Shawing any practices. Ship me to Denver, already.