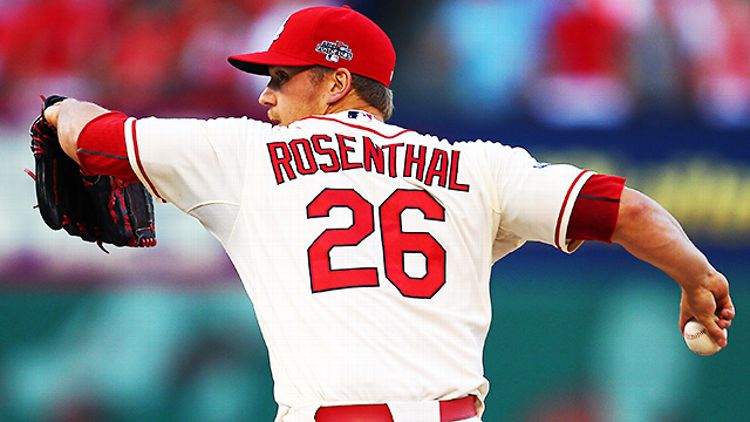 The 2013 MLB playoffs are in full swing. Are you keeping up? Michael Baumann is here to help by telling you which guys you need to know. And amid a lockdown postseason showing from the St. Louis bullpen, you need to know about the kid taking the mound in the ninth.

Who Is He? St. Louis Cardinals pitcher Trevor Rosenthal.

His Game in 25 Words or Fewer: You know how the centurions in Battlestar Galactica can change their hands into guns? That, more or less.

Social Media Presence: Rosenthal’s on Twitter (@TrevRosenthal), but he hasn’t tweeted in two months, and most of the tweets on his timeline are bromides about his team or messages about sponsors. You can tell he doesn’t aspire to be the next, say, Brandon McCarthy, because his bio reads, in part: “soon to be father, husband and pitcher for St Louis Cardinals,” when he is, in fact, all those things at this very moment.

Rosenthal’s bio also references Philippians 4:13, one of the more commonly quoted verses from the New Testament, which reads: “I can do all things through Christ who strengthens me.”

Well, How Strong Is He? Pretty strong. Rosenthal is a fairly large man, listed at 6-foot-2 and 220 pounds, and he throws quite hard. His average fastball velocity is 96.4 mph, the sixth-hardest fastball among MLB relievers this year, and he breaks 100 so often someone ought to ask him if he thinks he’s Tim Hardaway’s Ferrari.

Most Impressive Highlight: Given Rosenthal’s relatively short career and MLB’s Bronze Age approach to disseminating highlight videos, there’s not a ton from which to choose. That said, Game 2 of this year’s NLCS wasn’t half-bad.

Rosenthal entered the game against the Dodgers with a one-run lead and trusteeship of starter Michael Wacha’s five-hit shutout. The closer showed Yasiel Puig 98 mph on the outside corner, then climbed the ladder to get Juan Uribe to swing and miss at a 99 mph fastball at the collar. Finally, Rosenthal sat down Andre Ethier (who boasts a career .394 OBP against right-handed pitchers) on three consecutive pitches, the last of them right down the middle. Nearly every pitch said “screw you, you can’t hit this.”

Rosenthal picked up another save in Game 4 on Tuesday night to extend St. Louis’s series lead to 3-1.

Wait … the Cardinals Have This Insane Flamethrowing Closer and They Picked Him Up in the 21st Round Out of Good Bag/Cheap Shoes Directional Junior College? That’s correct. Doesn’t really seem fair, does it? No team in any North American sport drafts and develops the way the Cardinals do. In the past 24 months, the Cardinals let their Hall of Fame first baseman walk and replaced him with a utility man; when the utility man got hurt, they put in a former Division II first baseman with a lunar body type; now, they’re a game away from the World Series. Rosenthal’s one of many nobodies who has developed not only into a somebody, but into a potential star under the tutelage of GM John Mozeliak and the incredible scouting and player development regime he’s built.

Should We Know Him? My Crashburn Alley colleague Paul Boye has a huge man-crush on Rosenthal, and I make fun of him for it a lot. One day, he said to me: “You think I’m nuts, but go compare Rosenthal’s numbers to Craig Kimbrel’s.”

Craig Kimbrel is the best relief pitcher in the world, a man who once struck out more than half the batters he faced over an entire season. Boye’s claim is a big one, so let’s make the comparison:

Tale of the Tape: Craig Kimbrel vs. Trevor Rosenthal

And the news gets better. Rosenthal, with his big frame and ability to supplement his fastball with three other pitches that are at least passable, might wind up in the rotation and prosper nearly as much there. After all, riding a rookie closer to a World Series, then sticking him in the rotation the next year, worked pretty well for the Cardinals when they did it with Adam Wainwright.