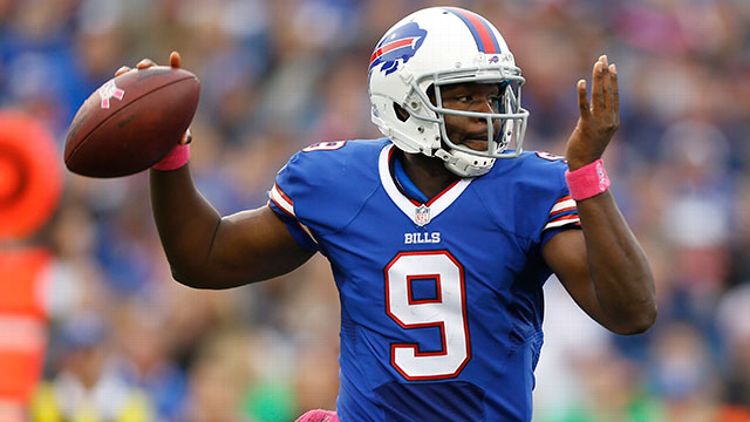 Thad Lewis might have been the most anonymous quarterback to start a competitive NFL game in recent memory. Sure, there are the Keith Nulls of the world who start when a team is actively trying to tank, but Lewis was a guy starting for a team that was trying to win games in the middle of the season. He did start a game for the Browns at the end of last season, but Cleveland — not exactly a quarterback hotbed — was so impressed by his 22-for-32 performance against the Steelers that they waived him this offseason. He caught on with the Lions, but the Bills traded for him this August when Kevin Kolb and EJ Manuel went down with injuries. It should speak to his perceived value around the league that the guy the Bills traded for Lewis, linebacker Chris White, was cut six days later without ever playing a game for Detroit.

And yet, on Sunday, Thad Lewis was actually kinda good! Playing without top wideout Stevie Johnson, Lewis went 19-for-32 for 216 yards with two passing touchdowns and a rushing score on a quarterback draw. That all came against the Bengals, one of the league’s best defenses, with a week’s notice. Lewis wasn’t able to lead his team to victory, but he did help out one subset of misguided fans: fantasy football owners who needed a challenge.

Before last weekend’s action, I encouraged people on Twitter to sign up for the Thad Lewis Challenge. The #ThadChallenge was simple: Pick up Thad Lewis, start him in your fantasy football league, and win. I didn’t include people who started Lewis as a flex or QB2 play in a league where you can start two quarterbacks, but outside of that, any scoring system was fair game. I expected a few stragglers to somehow pull out victories while Lewis racked up four points for them at quarterback, but because it’s fantasy football (and podcast listeners know how bad I am at fantasy football), Lewis had a very nice day, finishing as the fifth-highest scorer among quarterbacks per traditional ESPN scoring.

So, originally, this wrapup of the Thad Lewis Challenge was going to make fun of a few crazed lunatics who blew up their rosters to start a journeyman quarterback. Instead, thanks to Lewis’s impressive work, I’ve come to honor these brave fantasy football heroes, leaders who dared to dream and came out on the other side with a hard-earned victory. Let us all celebrate those who took part in the Thad Lewis Challenge. You already know that Scott is good people from his team name, an homage to North Carolina indie-rockers Archers of Loaf. He was apparently already down five points to begin his matchup by virtue of having the lowest score in his league a week ago, but here comes Thad Lewis to the rescue! Even though he hitched his defensive bandwagon to the rapidly decaying star that is the Houston Texans and was up against a team with LeSean McCoy, Arian Foster, and Dez Bryant, Scott and his white trash heroes were able to produce a comfortable win. This is a relatively painless degree of difficulty in the Thad Lewis Challenge: It gets more dangerous from here on out. Jay managed to turn a narrow loss into a narrow win by replacing his intended starter, Terrelle Pryor, with Lewis after reading about the challenge. Pryor only mustered 12 points in a matchup against the Kansas City defense, which turned what would have been a five-point loss into a four-point win. This is what the Thad Lewis true believers got for committing to the cause. Of course, it also took an injury to Eddie Royal in the Monday night game to keep him off the field for a good chunk of the contest, but no bother. Congratulations, Jay! Not only did Breton use Thad Lewis to win his fantasy football game, he claimed victory in a matchup over his significant other! Melissa got more points out of the Rams defense (25) than she did from the combined efforts of the five receivers she started (15). Bummer. Breton started Lewis over Colin Kaepernick, which turned out to be the correct move, as Kaepernick scored 18 points in this league. Did you know that Thaddeus Lewis scored more points in fantasy football this week than Peyton Manning did in four quarters against the Jaguars? Fantasy football is pretty much the worst, huh?

Mr. Erwin’s team benched Matthew Stafford to get some Thadisfaction (sorry) into the lineup. That wasn’t the correct move — Stafford outscored Lewis by two points in standard ESPN leagues — but Doug was able to squeak out a narrow victory. It helped that his opponent decided it would be a good idea to start James Starks, who has been out of action for a while now. Because we know that Starks went out of the lineup indefinitely after Week 3, we can carbon-date this starting lineup back to the beginning of Week 4. For a team that hasn’t been touched in three weeks, this is actually a pretty impressive week: there’s nobody on a bye, everybody put up a relatively positive effort besides Tyler Eifert, and if Lewis hadn’t thrown that late 40-yard touchdown pass to push the game into overtime, this fantasy team abandoner would have won. Or maybe he’s just really a big James Starks fan and feels safer with Mire Man in his fantasy lineup. Whatever works. My favorite part about Andrew’s entry is that he blacked out the owner’s names for each team. Like he wanted to participate in the Thad Lewis Challenge, but he was also so ashamed to be participating that he didn’t want to be publicly associated with starting Thad Lewis in his fantasy league. Did you know Matthew Berry has a secret ESPN team under an assumed name where he starts all the players he says you should sit each week?

Mr. Keefe told me on Twitter that his league awards -300 points for missed extra points, but that didn’t come up in the scoring for this matchup, which leads me to believe that he just really wanted to brag about playing in a league that awards -300 points for something happening in fantasy football. He is 100 percent correct to do so. That’s an awesome rule. He also won this matchup while getting zero points from three starters; Keefe tied with his opponent, but since the tiebreaker was points scored by the quarterback, Andrew actually won almost specifically because he had Thad Lewis. Dreams coming true. Mr. Parnass’s entry has some additional level of difficulty thrown in because he managed to start three members of the Cleveland Browns offense alongside Lewis, who was on the Browns at the end of the 2012 season. What percentage of fantasy football teams starting four people who are either on the Browns or have been with the Browns in the past 12 months have won fantasy games over the past five years? It can’t be very high. His opponent’s second-highest scoring starter was Bills kicker Dan Carpenter; the percentage of people who have won a fantasy football matchup when their second-highest scorer was the Bills kicker over the past five years has to be even smaller.

Finally, let’s throw out the highest praise for a fantasy football owner who risked the most of all. Not only did Paul Gutacker sign Thad Lewis this week, he started him at the expense of Aaron Rodgers. That’s true bravery! Not only did Mr. Gutacker win with Lewis in the lineup, Lewis outscored Rodgers in the process: Now, admittedly, Joel Trigger didn’t put up much of a fight in response. Joel Trigger sounds like the stage name of the guitarist in a third-wave emo band, but he’s actually a very nice gentleman who was the only opponent to explain his ugly loss away on Twitter. Trigger noted that he didn’t intend to start a Dolphins defense that was on the bye in his lineup, but picked up the Saints defense in a Saturday waiver claim and didn’t have a chance to insert them into his lineup. That probably means Mr. Trigger had enough of a life to not think about updating his fantasy football lineup over the weekend, let alone worry about something as impossibly stupid as the Thad Lewis Challenge. As it turns out, Joel Trigger might have been the biggest winner of all.

To those who didn’t make it into the article but started Thad Lewis and won, please accept my congratulations and suggestion that you should probably make your team names more appropriate. To those who started Thad Lewis and lost, hold your heads high. You were brave enough to take on a quarterback nobody believed in, basically on a lark because it would be funny. And you almost succeeded. You deserve the most fervent of faint praise. And for those of you who thought about doing it and chickened out, your shame is palpable. You could have picked up Thad Lewis when you had the chance; now, you have to use your entire free-agent budget just to have a shot at the most dynamic Duke quarterback in the NFL. You could have lived that Thad lifestyle but missed out on your chance. There won’t be another one coming. Well, until teams begin tanking for Teddy Bridgewater and start the likes of Ricky Stanzi and Ryan Lindley at quarterback. Until then, thanks to those who took part in the #ThadChallenge. You’re hardier souls than I.