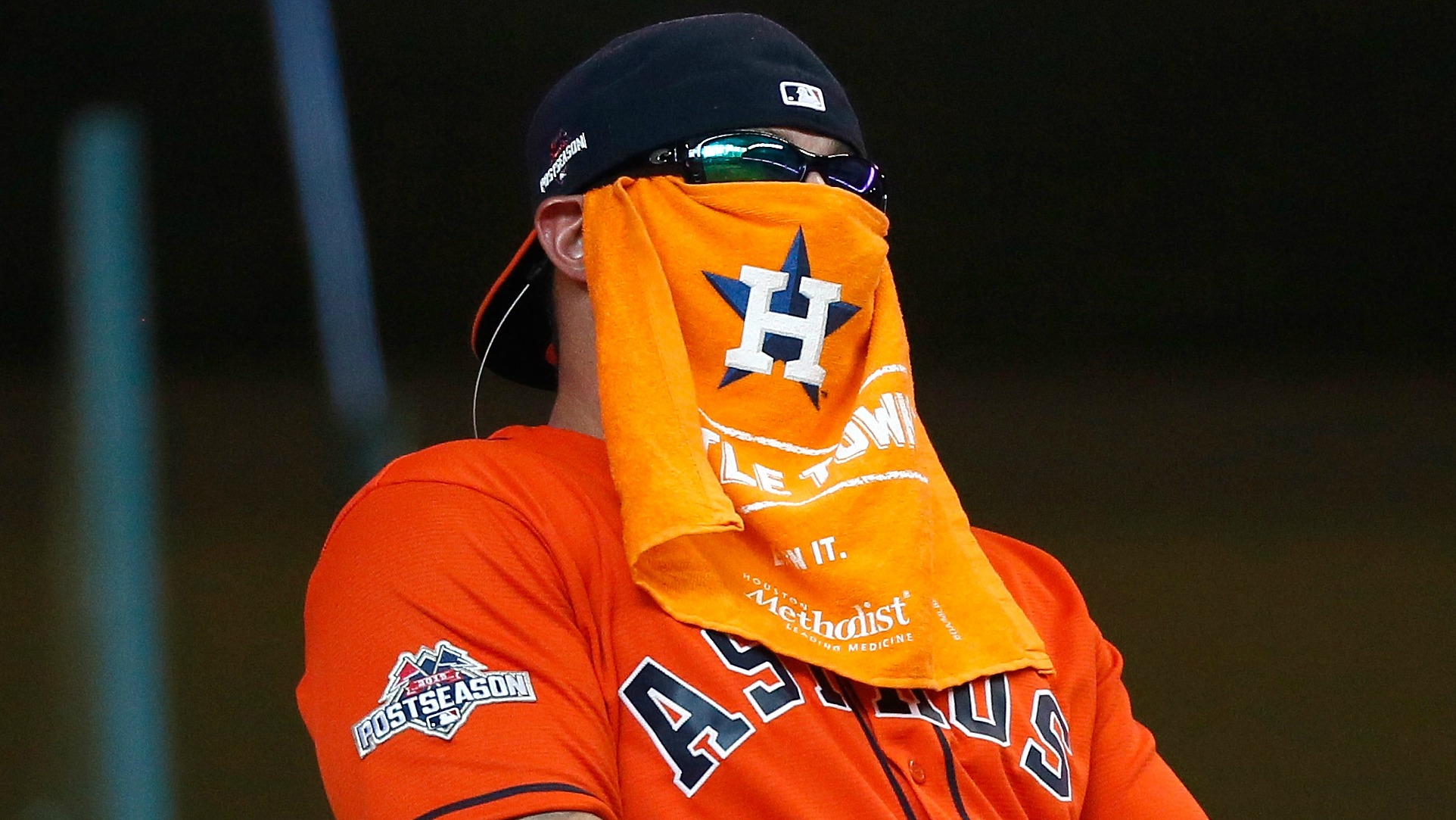 The best games are the ones with win probability graphs that make you do a spit take. Take a good look at this one, from FanGraphs:

What a beautiful win probability chart that is — it almost has a sound, like a drum and bugle corps that’s playing the crescendo to something by Holst until someone at the front of the line falls and all of a sudden you’ve got a pile of 20 bruised trombonists.

Houston was rolling in this game, up four runs with six outs to get, and the Astros’ three top relievers (according to manager A.J. Hinch) either in the game or available to pitch. They’d chased Yordano Ventura and touched up Ryan Madson on a two-run home run by Carlos Correa, who went 4-for-4 with a hit-by-pitch, a double, two home runs, and a single. They looked like a safe bet to advance to the ALCS in front of a home crowd whose cheers shook the building.

Then, Houston relievers Will Harris and Tony Sipp did the unthinkable in a game that had been dominated by home runs and strikeouts: They allowed six straight Royals to reach, and four of them to score, on five straight singles and an error on a ground ball up the middle.

Over the course of a 41-minute top of the eighth, Houston’s fans went from cheering out of thirsty anticipation, to cheering as a way to ward off the monster in the closet, to not cheering at all.

It was a parfait of nightmares for the Astros: A maligned bullpen that probably isn’t as bad as its reputation suggests allowed seven runs in 2.2 innings. One of the five singles went over the outstretched glove of diminutive Jose Altuve, almost mocking Houston’s second baseman. The tying run crossed on the error by Correa, who’d put the team on his back by getting on base five times and totaling 12 bases. And since Salvador Perez had been assailed by stray baseballs in all phases of the game and had to be removed, the coup de grâce came after Drew Butera, one of the worst-hitting position players in the game, worked a 10-pitch walk.

It’s the kind of loss that, if not redeemed with a win in Kansas City on Wednesday, will haunt Astros fans for years as a tragic missed opportunity, because it was.

While the Astros and Royals were reenacting the second half of Heat on a baseball diamond, 250 miles to the north, the Blue Jays put the Rangers to the sword quickly. Josh Donaldson, Chris Colabello, and Kevin Pillar all touched up Derek Holland for home runs early, and the Jays stayed out in front until the end.

The relative lack of back-and-forth in this game therefore affords us the opportunity to question what Toronto manager John Gibbons was after with his pitching staff, because I just don’t get why David Price came out in relief. Both he and Marcus Stroman were available out of the pen, as starters often are in the postseason. A starter will usually throw a bullpen session halfway between starts to keep loose, and so on the day he’s scheduled to throw, a manager will sometimes have that starter forgo the bullpen session and pitch in the game instead.

That’s not common, but it’s not unheard of, either. The difference here is that Price warmed up Sunday night, and when he came in Monday afternoon, it wasn’t to stomp out a critical rally; it was with a guy on first and two outs in the fifth inning of a then six-run game. The leverage index when Price came in was 0.25, which is to say the game absolutely did not hang in the balance.

And then Price stayed in, totaling three innings and giving up three runs in the process. Now, he’ll be unavailable to start Game 5. Gibbons says Price is unavailable full stop, but he also put Price in with a six-run lead, so who knows if he’ll be able to help himself Wednesday?

I get wanting to protect the lead at all costs in a must-win game, particularly given what had just happened to a four-run lead down in Houston. But a six-run lead with one man on and two outs in the fifth inning is something that starter R.A. Dickey, who’d allowed one run on 78 pitches, could have taken care of on his own, and if not, up six in the fifth inning isn’t the province of the ace making an emergency appearance out of the bullpen — that’s why you carry Ryan Tepera.

Now, Gibbons will go into the most important game he’s ever managed, and the most important game his team has played in 22 years, unable to use his team’s best pitcher. I like Stroman just fine, but against Cole Hamels with the season on the line, any reasonable person’s preference for Price over Stroman would be strong enough to forgo three innings of lackluster, low-leverage relief in a game that had pretty much already been won.

OK, so here’s the plan: We’re going to put together a bunch of young guys with tons of power. They will come from all over the world and play different positions. Some will be tall and handsome, others short and lumpy. But they will all be able to hit the ball a mile. Now what we’re going to do is put them in a tiny ballpark governed by outrageous winds and see what happens.

That’s pretty much what the Cubs have done, and in Game 3, it worked out quite well against one-time playoff demigod Michael Wacha and his teammates, as a playoff-record six Cubs hit home runs.

Given the way things had gone for Jake Arrieta recently, you’d expect any game featuring him and six Cubs home runs to be a laugher, but this one was quite close throughout. Part of the reason is that the wind, like sunshine, falls on the righteous and the wicked alike, and the Cardinals hit two home runs of their own.

But Arrieta was also as bad as he’d been in recent memory, allowing four earned runs in 5.2 innings, the most scores he’d surrendered in almost four months. That’s probably not cause for concern in the long term, because every pitcher has an off day once in a while, and judging by the speed at which Arrieta cycled his fixed-gear bicycle home to tend to his organically grown and slaughtered free-trade kale garden, his shortcomings against St. Louis weren’t physical.

Mike Matheny used four relievers, each of whom allowed a run, and will turn to John Lackey on three days’ rest in Game 4, with an early exit to the offseason in the proverbial cards if he loses.

I don’t know about the Mets themselves, but Mets fans sure were out for blood Monday. Getting booed in New York isn’t anything new for Chase Utley, but after Ruben Tejada hobbled out for his pregame introduction with a cast and a cane, the crowd at Citi Field reached new levels of hostility. Throughout the game, fans chanted “Utley sucks!” and “We want Utley!” alternately, with the absentminded yet all-consuming hatred one finds so often in sports.

But Don Mattingly started Howie Kendrick, not Utley, who could have played while appealing his two-game suspension, and so the discussion over whether Mets starter Matt Harvey would throw at Utley became moot.

Yasmani Grandal — whose full name is “Yasmani Grandal, who’s got only four hits since the Truman administration” — opened the scoring in the top of the second with a two-run single followed by a one-base error by Curtis Granderson that added a third run, and Harvey labored throughout his five-inning start.

None of that mattered, though, because after realizing they couldn’t beat the bejeezus out of Utley, the Mets found a similarly pale and leathery replacement: the baseball.

After that initial burst of Dodgers scoring, the Mets stopped being the Mets and became the Hedge Fund Managers: They arrived in New York, immediately put up a bunch of crooked numbers, and would not stop no matter how much waste and ruin they left in their wake. They put up 10 runs in a row, then let up long enough for Adrian Gonzalez to hit a solo home run, then got right back at it.

Much of the damage came courtesy of the Mets’ second-half heroes: Wilmer Flores went 2-for-3 with a walk and a nice double-play turn. Yoenis Cespedes went 3-for-5 with a home run, as did Travis d’Arnaud. And while David Wright was the only New York position player to start the game and not get a hit, he walked twice and scored a run.

They say the best revenge is living well — this is nonsense, because nothing will ever feel as good as answering violence with violence. But inching closer to the NLCS with a chance to clinch at home on Tuesday will have to do for the time being.