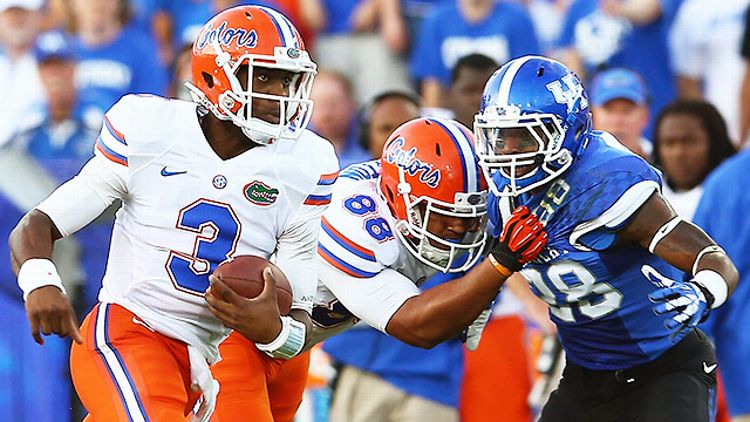 Who Is He? Florida Gators quarterback Tyler Murphy.

Where Is He From? Wethersfield, Connecticut.

Are You Even Trying to Hide the Fact That You’re Picking Players for This Series Based on Hometowns That Sound Like Tolkien Villages? We are not.

Years Played: The class of 2010 quarterback made his first start two weeks ago.

Follow the Bouncing Ball: After redshirting as a true freshman in 2010, Murphy saw very little action in 2011 and ’12 as Florida’s no. 3 quarterback and occasional wide receiver. Following starting quarterback Jeff Driskel’s season-ending broken fibula against Tennessee in the Gators’ third game, Murphy assumed the top spot.

His Game in 25 Words or Fewer: He’s a viable dual-threat quarterback who shows preternatural calm for a kid with so little on-field collegiate experience.

Bio Tidbit: Unlike some other dual-threat quarterbacks we can think of, Murphy was not recruited by Texas to play safety. This time, UConn did that.

Best Highlight: Murphy’s first Florida highlight play was this one, a dismal moment in a dreadful game boiling over with stupendously ill-advised plays, but he did get better in a hurry:

Should We Know Him? The inarguable strength of this Florida team is its defense, but in each of its next two outings, the Gators have to go on the road against top-10 scoring offenses — and annual conference rivals — in Missouri and LSU, and it’ll likely take more than a few touchdowns to keep pace with either. That stretch will be followed by the annual neutral-site clash with Georgia, which will also be loaded with scoring threats if the Dawgs can stop losing weapons to season-ending injuries of their own.

Murphy has recorded 39 completions on 54 attempts for 530 yards, five touchdowns, and an interception, and has rushed for 135 yards and two scores on 24 carries through two SEC games and most of a third. Coaches of better defenses than those he’s faced thus far are taking notice, and are already beginning the time-honored practice of burnishing a player’s reputation on the record so their own units will look better if they manage to shut him down.

This weekend, Murphy will have to operate at a high level in Death Valley, a hostile environment the likes of which few in his field ever have to face. The next three games should be very telling for the Gators.