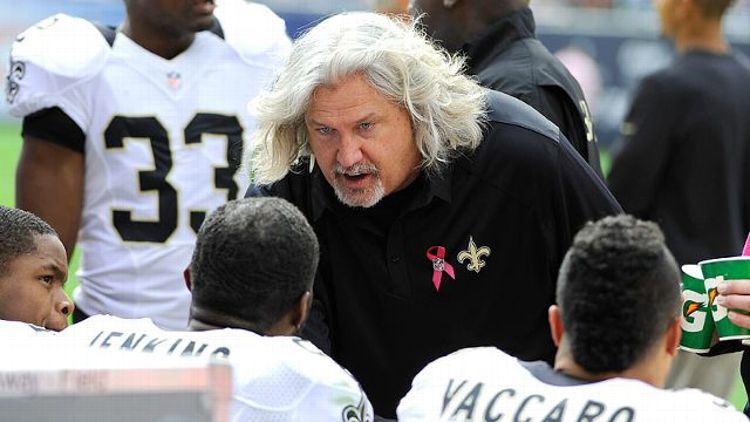 Game of the Week

The NFL should really be more specific in naming its awards. When I decided to look into who’s eligible to win Coach of the Year, my hope was that “Coach of the Year” meant just that — historically, it’s gone to head coaches, but theoretically, any coach could win. Well, no such luck. Only head coaches are in the running, and I say that if there’s a time to push for a change, it’s this year.

Right now, the likely Coach of the Year winner is Andy Reid, the man in charge of a 5-0 Chiefs team that finished last season tied for the worst record in the league. Reid and Alex Smith have helped arm Kansas City with a passable offense, but the real reason the Chiefs are still undefeated is that they boast the best defense in football. If you’re looking for who’s been the best coach on Kansas City’s staff, it’s probably been defensive coordinator Bob Sutton.

But even if Sutton were eligible, I still believe there’s someone more deserving — someone in a very similar spot. The beginning of this season has brought even more evidence that Sean Payton is among the best coaches we have, but even without Payton, New Orleans had a top-10 offense a year ago. The real difference between last year’s Saints and this year’s version has come on defense. No team in NFL history gave up more passing yards than the 2012 Saints, who were horrible by any metric you want to use. This year, they’ve been consistently good and occasionally great. And that’s why if the award really were for the best coaching job of the year, it would go to Rob Ryan.

As Bill Barnwell mentioned earlier this week, some of the Saints’ improved play on defense is the product of new personnel. New Orleans used the 15th overall pick on safety Kenny Vaccaro, who has played well as a starter and should stay one even after Roman Harper returns from injury. The Saints also brought in Keenan Lewis from Pittsburgh to start at cornerback.

Those additions, though, were met with a rash of injuries that left the Saints’ defense shorthanded before the season even began. The central question about that side of the ball coming into the season was how New Orleans would transition to Ryan’s 3-4, and losing ex-Cowboy and starting outside linebacker Victor Butler to a torn ACL wasn’t a good start. In all, the Saints are without three defensive starters, but you wouldn’t know it.

The Saints have gotten a significant boost from players like Cameron Jordan and Junior Galette finally coming into their own, but Ryan should get a ton of credit for putting them and the rest of the defense in spots to succeed.

Like the rest of his family, Ryan is known as someone who can dial up exotic ways to get pressure when the situation calls for it, but the difference in the Saints’ blitzing hasn’t been the frequency. According to ESPN Stats & Information, the Saints are actually blitzing less often than they did a year ago: from 30 percent of snaps down to 28 percent. But when they do blitz, it’s actually working. On plays when New Orleans sent five or more rushers last year, they got sacks only 5 percent of the time (27th in the league). This year, it’s 14 percent — good for third in the league.

If we’re trying to figure out why more of those blitzes are getting home, there are two likely explanations. The first is timing. Last year, New Orleans blitzed on 37 percent of third-down dropbacks. This year, it’s only 27 percent, which makes the Saints the sixth-most conservative defense in the league. For anyone familiar with what Ryan did in Dallas, this shouldn’t be surprising. He loves flooding the secondary with bodies in passing situations, often rushing only three guys when it’s clear the other team needs to throw. Where Ryan’s using most of his pressure is actually on second down, blitzing on 37 percent of dropbacks. It’s this type of move that’s allowed Ryan to keep opposing offenses constantly on their heels.

Last week, the Bears looked off-balance for most of the first half as New Orleans seemed to come up with one play every drive to totally short-circuit Chicago’s efforts on offense. The above shot is from the first quarter, with the Bears starting a drive from their own 20. On first down, Ryan has both of his safeties on the left side of the offense, with Galette lined up as a wide 9 defensive end. At the snap, Vaccaro and Malcolm Jenkins coming tearing off the edge. Matt Forte has to make a choice between the two. As he picks up Vaccaro, Jenkins has a straight line to Jay Cutler, and he’s able to get a sack and forced fumble, one that the Saints recovered. Later in the game, New Orleans ran the exact same blitz, and this time, Forte’s indecision led to him missing both guys. Vaccaro got the sack, which came on second down and stalled another Bears drive.

Chicago’s offense found its rhythm in the second half, and by the end of the game, the Saints’ defense had slipped to 16th in DVOA. But through four games, it was sixth, and their 14.6 points allowed per game is the fourth-best figure in the league. We all know Drew Brees and the Saints offense is going to be there, but the job Ryan has done on the other side of the ball is the reason New Orleans stands atop the NFC.

It’s been a pretty good year for the Ryan brothers. Somehow, Rex has managed to put together another stellar defense for the Jets, and it all starts up front. Muhammad Wilkerson’s play is no surprise. He was great last year and continues to be an overlooked star. The guy who’s been even better than the Jets could’ve hoped is Sheldon Richardson, the Missouri product who was taken with the first-round pick obtained in the Darrelle Revis trade. At Mizzou, Richardson was a penetrating under tackle in a 4-3, which left some people a bit confused when the Jets — typically considered a base 3-4 team — brought him in. In reality, New York runs a varied set of fronts, and it’s given Richardson the chance to bounce around the defensive line all year. And no matter where he’s lined up, he’s been nothing less than dominant.

The Jets have the best run-defense DVOA in football, and Richardson is at the center of that success. With his exceptional quickness, most thought Richardson’s early impact would be as a pass-rusher, but it’s been the run game where he’s made the most noise. Richardson made all kinds of plays during his final year in college, and he’s combined that knack for being around the ball with impressive power at the point of attack. He’s a real candidate for Defensive Player of the Year and a good find in John Idzik’s first draft as general manager.

I expected the right outside linebacker to be the best part of the Packers’ defense this year. I also expected that guy to be Clay Mathews.

The Packers took Neal in the second round of the 2010 draft, and for his first three seasons, he was either hurt or making his way as a middling defensive lineman. He played just 19 games in those three years, with 5.5 sacks. This year, Neal made the transition to outside linebacker, and last week, he broke out in a big way. He had six tackles and a sack against the Lions, and overall, looked like the best player on the Packers’ defense.

According to Tyler Dunne of the Milwaukee Journal-Sentinel, Neal dropped 15 pounds in the offseason for his transition to outside linebacker. So far, it seems to be working. Matthews is expected to miss at least a month and probably more after having surgery on his broken thumb. Before the season, that would’ve been a loss Green Bay probably couldn’t come back from. Now, it looks like they might be just fine.