What’s the Matter With Fernando Torres? 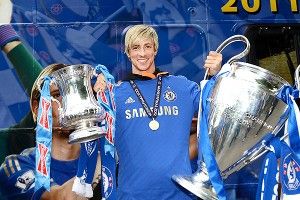 Here is a photo of Fernando Torres holding the 2012 Champions League trophy and the 2012 FA Cup. Since 2008, Torres has won the European Championship (in ’08), the World Cup (in ’10) and these two trophies. Saturday, in Munich, he was on the field when Chelsea completed one of the most improbable Champions League runs — coming from 3-1 down against Napoli and defeating a heavily favored Barcelona in the semifinals — since Liverpool came from behind against A.C. Milan in 2005. He looks happy. So why does this 28-year-old with a full trophy cabinet sound so damn sad?

Many fascinating story lines have come out of the Champions League final, which Chelsea won 1-1 (4-3 on penalties): The fact that it was Didier Drogba’s last game in a Chelsea shirt, that Roman Abramovich finally got to hold the trophy he coveted most; that, despite that fact, he still might not retain the services of interim manager Roberto Di Matteo; that Di Matteo was fired from West Brom last February, that John Obi Mikel walked up to Arjen Robben before the Dutchman took his penalty for Bayern and said, “Petr Cech knows where you are going to kick it,” which clearly got in Robben’s head, that since 2010, Arjen Robben has lost two Champions League finals and a World Cup final.

But the most curious and sad tidbit to come out of the wave of postgame interviews, by far, have been the bracingly honest statements of Torres. Speaking to Spanish journalist Guillem Balague, Torres spoke about his lost season and a half at Chelsea (he was bought from Liverpool for around £50 million last January), and the mixed emotions of winning the Champions League while barely contributing to its capture.

“In the end I was able to play a bit and help the team but there was huge disappointment when I saw the starting lineup, maybe the biggest disappointment of my life,” Torres said of being left on the bench to start the game. He entered the game in the 84th minute. I’d love to tell you he was instrumental in Drogba’s equalizer in the 88th, but in truth, he was wandering over at the far post when Drogba’s colossal header went in. He knows it, too.

The Champions League final wraps up a bittersweet year and a half at Chelsea for Torres. When he was sold to the West London club, he was still considered one of Europe’s top strikers, two years from a season (2007-08) where he was virtually unplayable.

Since being sold to Chelsea, Torres has scored 12 goals. Where he was a god at his former clubs — Atlético Madrid and Liverpool — he seems sullen and alienated at Stamford Bridge, regarded as one in a long line of expensive failures bought on a whim by Abramovich. Another Andriy Shevchenko.

But where the Ukrainian striker was clearly on the downside of a once-prolific career, Torres was supposed to be at the top of his game. His falloff has been precipitous and strange, almost inexplicable. And to hear Torres talk about his time at Chelsea, it seems to be largely psychological: “This season I felt things I had never felt [before]. I felt they have treated me in a way I was not expecting; not in the manner for which the club brought me here … [T]his is not the role for which I came. I’m not happy … The worst moments of my career have come during this season and I am not willing to relive those moments. There have been ups and downs, and moments where I’ve felt lost and didn’t know what to do or where to be.”

What struck me most about the interview, which probably could have been better timed on Torres’s part, was how, if you strip away all the talk about the Champions League and playing time and whether or not he was selected to take a penalty kick in front of more than 65,000 people at the Allianz and millions watching on television at home, you basically read the words of someone who, almost disturbingly, sounds like any other 28-year-old with a lot of work problems. “The ideal for me for next season is if someone tells me what’s going to happen … What role will I have in the team? What function? What is expected of me?” He wants to know the future. Don’t we all?

How Did Miami Adjust to Indiana's Defense?