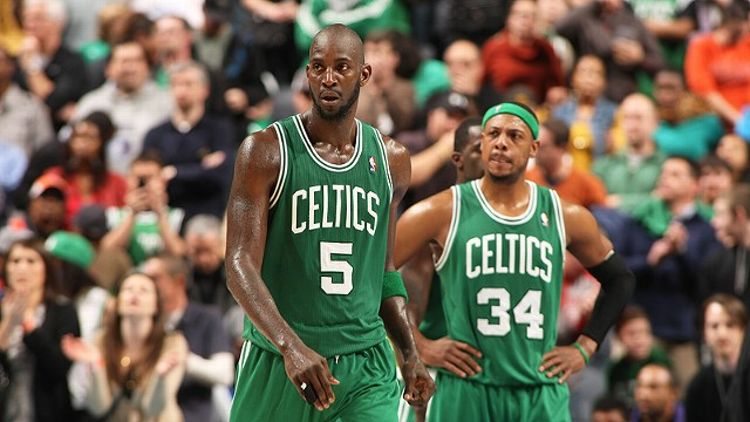 The Celtics have one game left before the All-Star break, and you gotta imagine it can’t come soon enough. After playing the Bulls tonight, Kevin Garnett will head to Houston for the All-Star Game, Rajon Rondo will continue prepping for surgery, and Paul Pierce will drive home, where he’ll be enjoying a relaxing All-Star snubbee weekend by (presumably) playing a whole bunch of Just Dance 2 for Wii. Meanwhile, Danny Ainge will try and make sense of what was about as odd, heartbreaking, and bonkers a first half a team can have.

When Rondo went down, I wrote there wasn’t much of a silver lining: Any relief provided by an uptick in play and a corresponding rash of wins would be tempered by sad chatter that “maybe this team doesn’t need Rondo all that much anyway.” Well, this team, as it has an inclination toward, outdid itself. It wasn’t just an uptick; it was a blood-pumping, shots-fired, kill-’em-all, “is this your pen?”-esque annihilation spree. When the Celtics toppled Denver on Sunday night in triple OT, they muffed out the Nuggets’ nine-game winning streak, stretched out their own seven-gamer, and coronated themselves as THE HOTTEST TEAM IN THE LEAGUE [air horn] [air horn] [air horn].


And then, of course, the next day they lost to the Bobcats.

If that was all, maybe we’d still be having the same conversation we were having right after Rondo went down. A couple of wins are nice, but what’s the point of keeping this core together other than gushy warmness of nostalgia and friendship? Plus like Zach Lowe already told you people, let’s not jump to conclusions: With this sample size, concluding the Celts are better off without no. 9 is like assuming D’Angelos is better off without the Number 9. (Yes, that was a forced reference to New England–based sandwich chain D’Angelos and its popular sub option, the Number 9. And yes, I am sorry for everything.)

But they didn’t just win. They were THE HOTTEST TEAM IN THE LEAGUE [air horn] [air horn] [air horn] (for 24 hours). And while those wins led not only to Rondo getting the proverbial “gasface” and some troubling questions — Why wasn’t Paul Pierce playing this hard when it was Rajon providing him with the basketball? — they’re still, you know, wins (which are better than losses). This team had its shoulders hunched almost since opening night. The seven-gamer was the most (yes, modified) fun Celts fans had all year.

And then again. Shouldn’t we be considering it some kind of omen that the last three weeks have brought three season-ending injuries? Following Rondo, Jared Sullinger goes down — in just the second game of what should have been a long and fruitful stewardship of the starting four spot — and needs a backiotomy. Then Leandro Barbosa — who stopped feeding his sources at ESPN Brazil long enough to take the minutes he was gifted in Rondo’s absence and run with them like the wondrous gazelle he is — gets a crushing ACL tear of his own. And now a team that started the season with a flowering cornucopia of guards is looking for backcourt saviorism in the form of once-and-future NBDL great Shelvin “Return Of The” Mack. It basically feels like God is hovering over Waltham, Massachusetts, right now, doing the hand-over-mouth side-whisper thing: “Danny, seriously. Blow it up. Blow it up. Don’t make me hurt anyone else. Blow it up.”

We know that Rondo, Sully, and Barbosa are headed to the OR. We know KG is headed to Houston. We know there are eight days before the trade deadline, and so we know that we don’t know at all what this team will look like by the end of the month. Other than that — we know there’s a game to be played in Boston tonight.