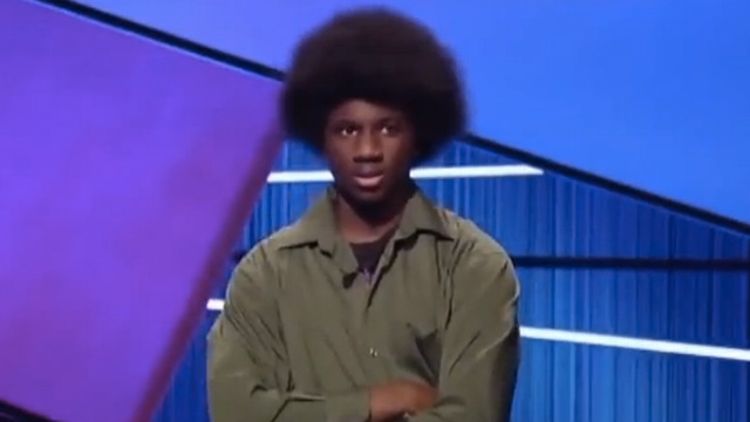 Leonard Cooper of Little Rock, Arkansas, had a lot of catching up to do:

After Day 1 of the finals of the Jeopardy! Teen Tournament, he was in third place with only three racks. But that was OK, because he was wearing the olive long-sleeve, so anything was possible.

And, of course, today was a new day.

Sitting in second place, a clue came on the board, and Leonard was pretty sure he knew the question.

But not that sure. He buzzed in anyway, because if there’s one thing we quickly learn about Leonard, it’s that he is the embodiment of “why not?”

He panicked a bit, searching for the answer by attempting to find the clavicle on his body with his hands (who hasn’t been there?).

And he finally came up with this answer:

What’s the, uh, like, the neck bone, um, COLLARBONE.

He got “collarbone” in just in time, which is good, because for a moment there Leonard was about to be known as the guy with the Afro who guessed “neck bone” on national television. The clue wasn’t “this bone goes great with oxtail,” and I think Leonard was confused by that at first. Luckily, he’s a legend, he kind of looks like a leftover Jackson, he’s wearing the olive long-sleeve with the open collar, and now he’s almost in the lead:

Fast-forward to Double Jeopardy, with just a minute left, and this is the scene:

Leonard is in the Day 2 lead, and has just picked a Daily Double, in the category of American Lit. You’ve got a big decision on your hands, Leonard, because you’re still behind from the previous day. WHAT TO DO, LEONARD?

An audible gasp comes from a section of the audience, most likely from those who don’t know Leonard, thus not understanding the power of the olive long-sleeve.

THINK, LEONARD. YOU KNOW THIS.

Well, after Trebek got the word “men” out, Leonard’s face went from focused to a smile that hinted, “Finish reading this so I can collect my money.”

A few seconds later, Leonard hit them with the “What is a jury?” and BOOM:

The category is “Military Men.” The clue:

After the 30 seconds, it’s officially judgment day. Any of the three could win. Leonard, I hope you know what you’re doing, because these other two 11-year-old private-equity managers look mighty confident.

HIS TWO-DAY TOTAL. BARRETT IS HERE TO WIN.

NOT GOOD, SON. PLAYED YOURSELF, NILAI.

At this point, we flash over to Leonard, who, Trebek notes, “is looking pretty happy. Did he come up with Ike?”

Leonard shakes his head, as if to deny coming up with Ike. I’m very confused, why woul—

By my senior year of high school, the coolest thing I’d ever done was hit a shot from half court, to then turn around and see that no one was looking. Leonard, on the other hand, not only came from behind to win the Jeopardy! Teen Tournament, but also dropped the mic in the form of “Alex, I don’t know the answer, and frankly, I don’t care, because it’s time for you to GIVE ME MY FORTY RACKS.”

All in the olive long-sleeve.

You’re my hero, Leonard. If you’re accepting interns, let me know. Not professional ones, just swag ones. I want to be your swagtern.