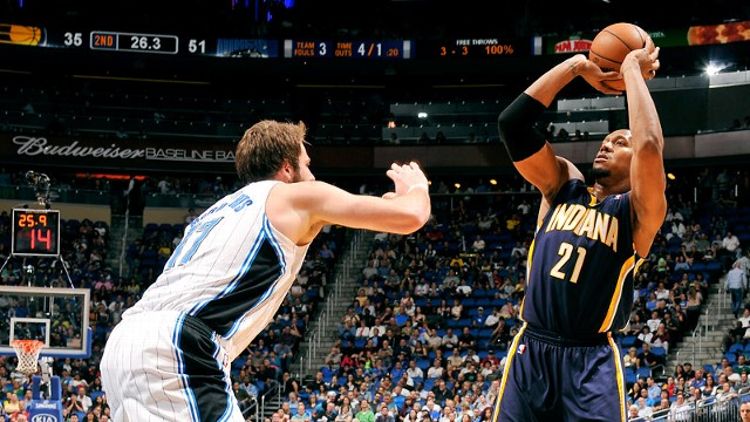 It’s hard to come up with an anecdote that encapsulates David West. It’s not because he isn’t worthy of one, though. It’s more that his yeoman-like approach rarely contains standout moments. His production from game to game has the consistency of a metronome and, unfortunately for West, the appeal of one, too.

Consistency can be a dirty word as far as branding is concerned, but there’s no denying that West’s ability to churn out points on a nightly basis has been invaluable for the Pacers all season. As his teammates — most notably Paul George and Roy Hibbert — struggled to adjust to the absence of Danny Granger during a dreadful first month, West was there to pick up the slack. According to NBA.com, through December 1, Indiana’s offensive rating without West on the floor was 88.3 — a number that would have made last year’s Bobcats, a historically bad team, look like a collection of offensive savants. Needless to say, the team’s 8-9 record over that stretch could have been much worse without West’s steadying hand.

The Pacers’ current spot at 25th overall in offensive efficiency is still largely attributable to that early-season slump, and that December 1 date is no arbitrary cut-off point. That loss to Golden State coincided with George’s low point this season in his adjustment to being the primary perimeter option. Since bottoming out with an 0-for-7 showing from the field that night, the emerging forward has combined with West to boost Indiana’s offensive rating to 101.7, a number that would rank a more respectable 16th had it been the team’s mark from the start of the season.

When watching George play, it’s easy to see how his combination of athleticism, handle, and shooting ability can be essential to a team’s offense. West’s unremarkable game, on the other hand, doesn’t give off nearly the same vibe. So while George slashes to the rim and unleashes jumpers from deep, his veteran counterpart operates from one of the trickiest areas to operate on an NBA court — the elbow.

At any level of the game, the elbow area can be both a nightmare to defend and a nightmare to navigate. With the ball at that spot, offenses can run a host of actions — from isolations to two-man games — but the spacing is often cramped and the outcome of a possession starting at the elbow can often end with a long 2-point jumper.

But catch a Pacers game and you’ll see West loitering around the left elbow like Taylor Swift outside her next boyfriend’s house. It’s an odd sight that gives the impression that the big man isn’t entirely engaged in the offensive proceedings, but in reality West is simply claiming the real estate where he does most of his damage.

Like Dirk Nowitzki, in an age of “offensive efficiency” West is a throwback in that he relies on an accurate midrange jumper to be a highly efficient isolation scorer in an area that normally doesn’t allow for it. While the big German’s game is rather unorthodox, West’s isolation attacks from this spot consist primarily of jab-step jumpers and using raw power to muscle defenders deep into the paint for his patented half-hooks.

The word “flair” can’t be attributed to anything in the video above (or any part of West’s game), but it doesn’t stop him from being extremely effective. Sometimes the simplicity of his attacks makes it easy to overlook the nuance in his game. West, like Reggie Miller before him, has mastered the subtle art of the push-off. Unlike Miller, who used this maneuver coming off screens, West uses it against fronting defenders to great success.

Though he’s proven plenty capable of doing so, West isn’t always just looking to score from this spot on the floor. A handful of times a game, West engages in pinch-post action with one of the Pacers guards.

After catching on the elbow, George Hill, Lance Stephenson, and George will cut hard outside West and look to receive the ball on a cut or have him come back and meet them with a pass-and-follow screen or dribble handoff. There is really no limit to the timing or type of action two players can run from this spot, which means Pacers opponents will always find this interaction with West and his teammates extraordinarily difficult to scout.

Perhaps the most important relationship on the floor is the one West has with center Roy Hibbert. Naturally, the elbow is a great spot for two big men to go high-low. With West possessing a threatening jumper, his defender is forced to stay close to him, opening up the paint for Hibbert, biding his time on the baseline, to flash to the middle of the paint (also known as a duck-in) for a quick catch-and-finish.

West posing a threat at the elbow also allows Hibbert to battle defenders one on one, right near the rim for offensive rebounds. It is a big reason why the Pacers center ranks sixth among all players in offensive rebound rate. At 7-foot-2, Hibbert has the height and length to win rebounding battles against most of his opponents, especially when they’re the only two players initially near the rim when the shot goes up.

Despite the emergence of George, Indiana’s hopes for a deep playoff run lie in the hands of West. In the team’s latest loss, to Brooklyn, West struggled mightily and the team produced one of its worst offensive showings in nearly a month. It was a prime example of his importance to the team’s overall success.

If West can’t score, the team’s offense likely falls to a point where even their top-ranked defense can’t pick up the slack. Against teams like Atlanta and New York — both of which have players that match up well with West — this could spell serious trouble. Though the sample size has obviously been small, West has seen a huge drop in his production against those two teams, likely because Josh Smith and Carmelo Anthony (when engaged) have the strength and athleticism to make life difficult for the Indiana forward.

Miami and Chicago, however, are different stories. West has proven that the Heat’s front line — sans Lebron James — can’t contain him. It’s been a big reason for the team’s success against the defending champs this season. Same goes for the Bulls, as Carlos Boozer is the opposite of a defensive stopper, and Taj Gibson, for all his great qualities, can’t match West in terms of sheer strength.

An emerging superstar might be stealing all the headlines in Indiana, but it will be the veteran with the quietly effective game that determines Indiana’s fate this season.