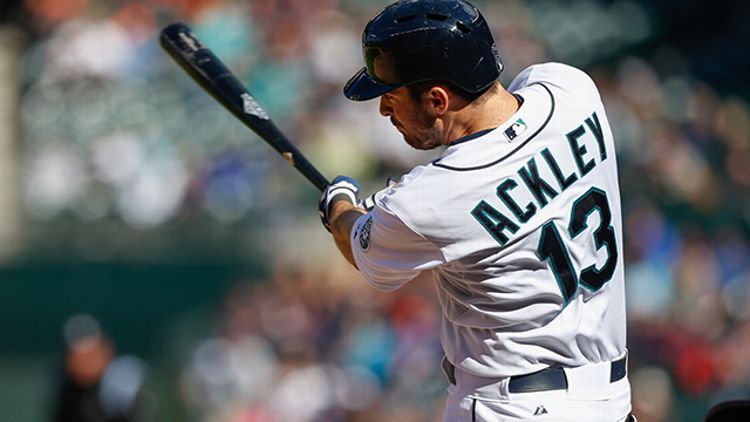 With the second overall pick of the Major League Baseball draft on Thursday, the Chicago Cubs picked corner infield prospect Kris Bryant out of the University of San Diego. In the coming days, given the Cubs’ history, I imagine we will be treated to a number of pieces about whether Bryant will be capable of turning around a franchise looking for its first World Series since the election of William Howard Taft. And maybe he will. He seems to be a can’t-miss prospect, with power that should translate quickly and easily to the big league level. But since I feel like I have already lived this story and had my heart broken, let me briefly tell the tale of a second overall pick, Dustin Ackley. Ackley was once the best college hitter in the land, who came to Seattle to turn around a franchise that has never won a World Series, and today finds himself rebuilding his swing in AAA Tacoma. The story of Ackley, who was sent down to AAA Tacoma over Memorial Day weekend, begins at the end of a disastrous 2008 Seattle Mariners campaign. Buoyed by a rare stellar pitching performance from future Cy Young winner R.A. Dickey (who was a curiosity then, showing little indication of what was to come), the Mariners won their final three games of the season, allowing the Washington Nationals to claim the worst record in baseball and the right to draft Stephen Strasburg. I remember the series both for the weird sense that no one cared that Raul Ibanez was likely playing his final games in Seattle (apparently everyone else knew he was coming back years later as the 41-year-old reincarnation of Richie Sexson) and the sense that … of course. Of course the Mariners would fail to lose. All they had to do to get the best pitching prospect of a generation was not sweep the A’s. Of course, they swept the A’s.

The Mariners haven’t been good in a long time. The franchise hasn’t made the postseason since 2001, when a phenomenally good team that had shed three surefire Hall of Famers over the three previous seasons in Randy Johnson, Ken Griffey Jr., and Alex Rodriguez (Rodriguez’s since-soured reputation notwithstanding) equaled the Major League record for wins in a season. After that came an inglorious decline phase as the roster aged, and the team, while still good, missed the postseason in back-to-back years. Then the floor fell away like muscle mass off of Bret Boone’s biceps.

The years that followed included the tenure of general managerial Bill Bavasi, which was, and I don’t think I’m overstating this, horrific for Mariners fans. During the dawn of the Moneyball era, while competing directly with Billy Beane’s Oakland A’s, the Mariners became the rare bastion for regressive player analysis. The damage done to the franchise was deep and widespread; only the team’s international scouting department, which brought in talent such as Felix Hernandez, Shin-Soo Choo, and Asdrubal Cabrera, was operating at a competent level. And Cabrera and Choo were traded to the Indians in separate deals for Ben Broussard and Eduardo Perez within weeks of each other. Which, of course. Of course the Mariners would develop two key offensive pieces at positions where they would go on to play Yuniesky Betancourt and Milton Bradley, and give them away for both halves of an aging DH platoon. Of course.

After a trade sending Adam Jones and a number of other prospects to the Orioles for Erik Bedard, the rare failed trade in which poor process was outstripped by poorer results, the Mariners mercifully relieved Bill Bavasi of his duties. The only saving grace to be found for Mariners fans during this lost half-decade came from the development of Felix Hernandez, and an increasingly intelligent community of statistically minded fans (highlighted by the likes of Jeff Sullivan and Dave Cameron) who made losing fun and rallied the fan base around learning the sabermetric tools that could help rebuild the franchise.

Which is where Dustin Ackley comes in. The season immediately following Bavasi’s tenure was an exciting one for Mariners fans; not only was the team making moves that seemed to take into account the existence of numbers, but they also had the second overall pick in the draft. That meant they could have their pick of the non-Strasburg litter, and that pick clearly was Dustin Ackley. A superstar at North Carolina, Ackley was among the best contact hitting prospects to ever come out of college baseball. Perhaps Ackley lacked the upside that many elite hitting prospects had, but he was a player without weaknesses, sure to make a quick impact at the major league level. When it was determined that he would play second base at the major league level, a consensus formed that his downside was Brian Roberts, and his upside was Chase Utley. All-Star or MVP was the only question with Ackley.

And when Ackley emerged at the big-league level in 2011, he immediately appeared as a promise fulfilled. In half a season of play, he posted a .273/.348/.417 slash line, while playing half of his games at run-suppressing Safeco Field. In half a season, his bWAR was 3.7. The question remained “All-Star or MVP?” I remember in the final series of the 2011 season when Ackley went 1-11 and hinted at things to come, I was still being taken back to the magical season of 1995. Here was the next Edgar Martinez. Here was a bona fide Mariner hitter, developed in-house, capable of leading the team back to relevance. And as Strasburg struggled with arm injuries, the question at the time appeared to be, did the Mariners win the draft by getting Ackley?

So how the hell are we here? Ackley is being outhit by no-bat shortstop Brendan Ryan? He’s playing the worst baseball of his postpubescent life as he enters what should be his physical peak? Are we to believe that, as manager Eric Wedge suggests, sabermetric ideas infiltrated Ackley’s mind, causing him to change his approach in catastrophic ways? Or that the Mariners are cursed (or, more to the point, poorly coached at the minor league levels) such that they are incapable of developing major league hitters? Neither of those theories seems to hold water; Ackley’s approach has actually gone against most of the sabermetric recommendations made for him (which suggested that he was insufficiently aggressive in his approach to pitches on the edge of the strike zone), and the recent development of Michael Saunders and Ackley’s college teammate Kyle Seager suggest that the Mariners are, finally, capable of shepherding a hitting prospect into the major leagues.

The answer is that there is no clear answer. Players with Ackley’s contact skills, which have not eroded like every other offensive tool he has, are rarely players without value. Any individual baseball player is going to develop within a relatively wide set of error bars around his predicted path, and Ackley appears to have found the bottom of his range. Further, the only offensive player from the first round of Ackley’s draft class to succeed at a high level thus far has been Mike Trout, who was drafted at pick 25 and, to be fair to the Mariners, was on no one’s radar for the second overall pick. The team didn’t err, the player should be better, and yet, again … of course.

Fangraph’s Jeff Sullivan, a year or so after Ackley was called up, found that Ackley was very similar to another highly touted Mariners prospect, Jeremy Reed. This was before Ackley’s game completely fell apart and when he was still looking potentially like a future All-Star. The Jeremy Reed comparison was just a mean joke. We all remembered penciling in Jeremy Reed as a 20/20 guy, with plus defense, and hoped he’d become more than that. And we remember what he became, which is yet another Mariners prospect known only for having once been a Mariners prospect. And we all laughed. But, also, we looked at the numbers, and we knew he might be right. Much like any relationship doomed to failure, there is the moment when you know, when your frontal lobe takes you out of the moment you are in, and casts itself forward into an inescapable future of unhappiness. And everything from the moment that thought occurs is tainted by the thought itself. As a Mariners fan, all relationships with hitting prospects are breakups waiting to happen. That is just sad — mostly because it is silly for a grown man to be heartbroken by a baseball player. But also because Ackley’s failure to develop feels profound. Joined by fellow disappointments Justin Smoak and Jesus Montero, Ackley should just be a part of another lost season, another year of Felix Hernandez’s prime wasted on a mediocre team. But his failure stings deeper. Perhaps it was the promise of the draft, the thought first that Strasburg would join Griffey and Rodriguez in the pantheon of Mariners top picks, and then the brief moment when we believed we had somehow lucked upon a prize more valuable than Strasburg. Without that hope, would there be any suffering?

Maybe I am getting way ahead of myself. Ackley may yet rediscover the swing that made him the prospect he was, and he’ll return rejuvenated at the All-Star break. His slash line since heading down to AAA Tacoma is .378/.477/.514. But the feeling now is of an ugly ending, with a fan base that rallied around sabermetrics as a means of wading through a decade of losing. And once again, we will be a fan base that spends another September pulling for a beleaguered franchise to lose, hoping to maybe get another chance at drafting the likes of Ackley or Bryant … and hoping that this time it will be different.

90-Day NFL Warning: Richard Sherman and Roddy White Don't Seem to Like Each Other Very Much