90-Day NFL Warning: Richard Sherman and Roddy White Don’t Seem to Like Each Other Very Much 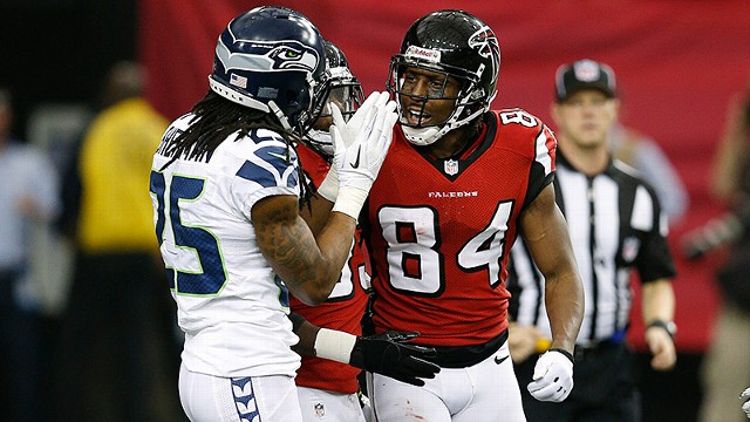 For the same reason it lacks stars, the NFL typically lacks villains. In an 11-per-side, helmeted-and-padded game, personality rarely shines through, and that means the objects of our loathing become the men roaming the sideline, or the helmets themselves. There are occasions when a brash wide receiver or a stomping can get our attention, but it doesn’t go much beyond that. And that’s why Richard Sherman’s continuing efforts to go full wrestling heel have been wonderful.

The list of players Sherman has sparred with — both physically and verbally — has gotten long enough that I’m afraid I might forget someone. It started with Tom Brady, includes an actual jab from Trent Williams, and spilled into the offseason with Darrelle Revis, after Sherman had already taken shots at Roddy White just a few days earlier.

Three and a half months have passed since those comments, but it doesn’t sound like much has changed. On the NFL Network’s Top 100 Players of 2013 countdown last night, Sherman, in one of the pre-taped interviews that accompany each player on the list, said the 39th-ranked White didn’t deserve a spot at all. Well, it just so happens that White was a guest on the discussion show that follows each airing of the countdown, and if you can imagine, he had a few responses. “He would actually be the first guy that I would want to face,” White said. “Frankly, I watch film and I know what I can do. I know what my ability is, I know what his ability is. I sit there and watch him, and I’m like, OK. I’m not sitting there, losing any sleep getting ready for Richard Sherman.”

There was more, but the best part is here: “He has talked himself into a place where he has to play some really good football this year.” This is where we should mention that while Sherman doesn’t actually match up face-to-face with Williams or Revis, White is a different story. The Falcons and Seahawks play in Week 10. There are times when I’m worried that story lines like this get overblown. This is not one of those times. If Fox makes a White-Sherman cam available for this, that’s the way I’m watching. Not often enough is there a palpable dislike among professional athletes anymore, and I, for one, want to thank Richard Sherman for doing his best to change that.