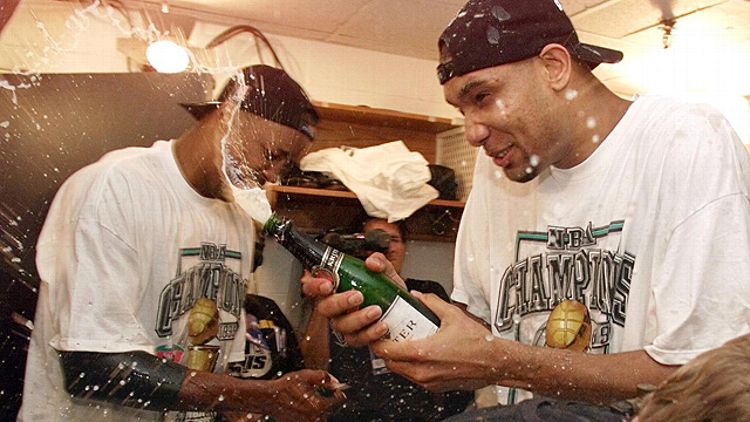 Heading into last night’s Game 1 against the Miami Heat, the San Antonio Spurs had exactly nine days of rest, something that became something of a story line in the days that followed. The Heat ended their series Monday and had a three-day turnaround, a fairly less-than-normal amount of time to have between two playoff games.

After the Spurs’ close win last night, I started to wonder how much exactly this tidbit of information mattered. Did the Spurs’ extra days of rest give the team more strength to power through against the very physical and aggressive Miami team? Or did their extra days of rest leave them drained, rusty, and slightly underprepared for the tough matchup?

To find answers, I delved a bit into history (and by “I,” I am referring to the PRISM-like Elias Sports Bureau — in the most positive way possible, of course).

Here are the eight most recent teams that had over nine days of rest entering the playoffs:

Stats on charts on the web. Let’s break this down.

Not including last night’s game, teams that had over eight days of rest went 4-3 (though that 1952 Syracuse Nationals team probably got stuck on a bus in a ditch somewhere and arrived three minutes prior to the game and played without warming up, so it should really be 4-2). Let’s break this down even further. Teams that had an average starting age older than the NBA average tended to do better with more days of rest, which clearly makes sense because when you’re 36 and rusting, every extra day off the court energizes you. Specifically, of the six teams that were older (the 2013 Spurs team included), five won, while the two teams with starters of a younger age than the NBA average lost. Interesting but logical — if a team is older, they will do better with rest, while a younger team will become restless. Now let’s do a game-by-game breakdown of the last four games (not including yesterday’s) to see if there’s anything that stands out (the first team listed is the one that had the long break).

The Pacers started off really slowly at home, and it seemed like those 11 days were no good for them (they committed 10 turnovers in the first half). After getting back into the groove, however, they began a 26-5 run in the second quarter and held the Heat to just 38 percent from the field. Miami had just come off of a seven-game series against New Orleans two days ago, and the fatigue was evident.

The game went pretty much back-and-forth throughout the first half, and the teams went into the locker room with 42 apiece after two quarters of messy play. Soon after, though, a shooting barrage from Tim Duncan and Tony Parker gave the Spurs a big lead in the third quarter, with Duncan scoring 13 and Parker scoring nine. Then-Nets coach Byron Scott summarized it pretty succinctly: “I think anytime you have that length of time off, you’re going to be a little rusty.”

The 76ers had three days of rest (the same amount Miami had before last night’s game), while the Lakers had nine days of rest (the same amount the Spurs had before last night’s game … starting to see parallels here). The two teams remained close through the first quarter before Philly pulled through in the second to enter halftime with a six-point lead. The home team came back, though, and the score remained close through the end, as a 2-point shot at the rim from Eric Snow sent the game into overtime. Philadelphia pulled away with a 107-101 win, and a pair of Dikembe Mutombo free throws ended the game (no, no, no!). Though the Lakers’ stats weren’t subpar (44.4 field goal percentage and 46.2 percent on 3s), Shaq’s minus-6 and Kobe’s minus-6 (on 7-for-22 shooting) were probably indicative of rust.

Whoop — Tim Duncan’s first-ever NBA Finals (which, of course, the Spurs went on to win). San Antonio had just finished a sweep of the Portland Trail Blazers and was on a 10-game winning streak entering Game 1 of the Finals. San Antonio fell behind early — 27-21 in the first quarter — but quickly picked up the pace and finished 89-77 on 47.8 percent shooting behind Duncan’s team-high 33 points. Apparently rust ain’t no thang to the Spurs (or Duncan).

Though an extremely small sample size (granted, there are only eight total instances of this since 1952), it seems like rust does indeed play a part — in half of the instances at least. And even if the overall outcome didn’t reflect the long break, teams that had over nine days off tended to do worse in the first quarter and seemed to need those minutes to adjust back into playoff mode.

Still curious and need more numbers and analysis? Check out this piece from Bill Barnwell last year; he may or may not have come up with the same conclusion.