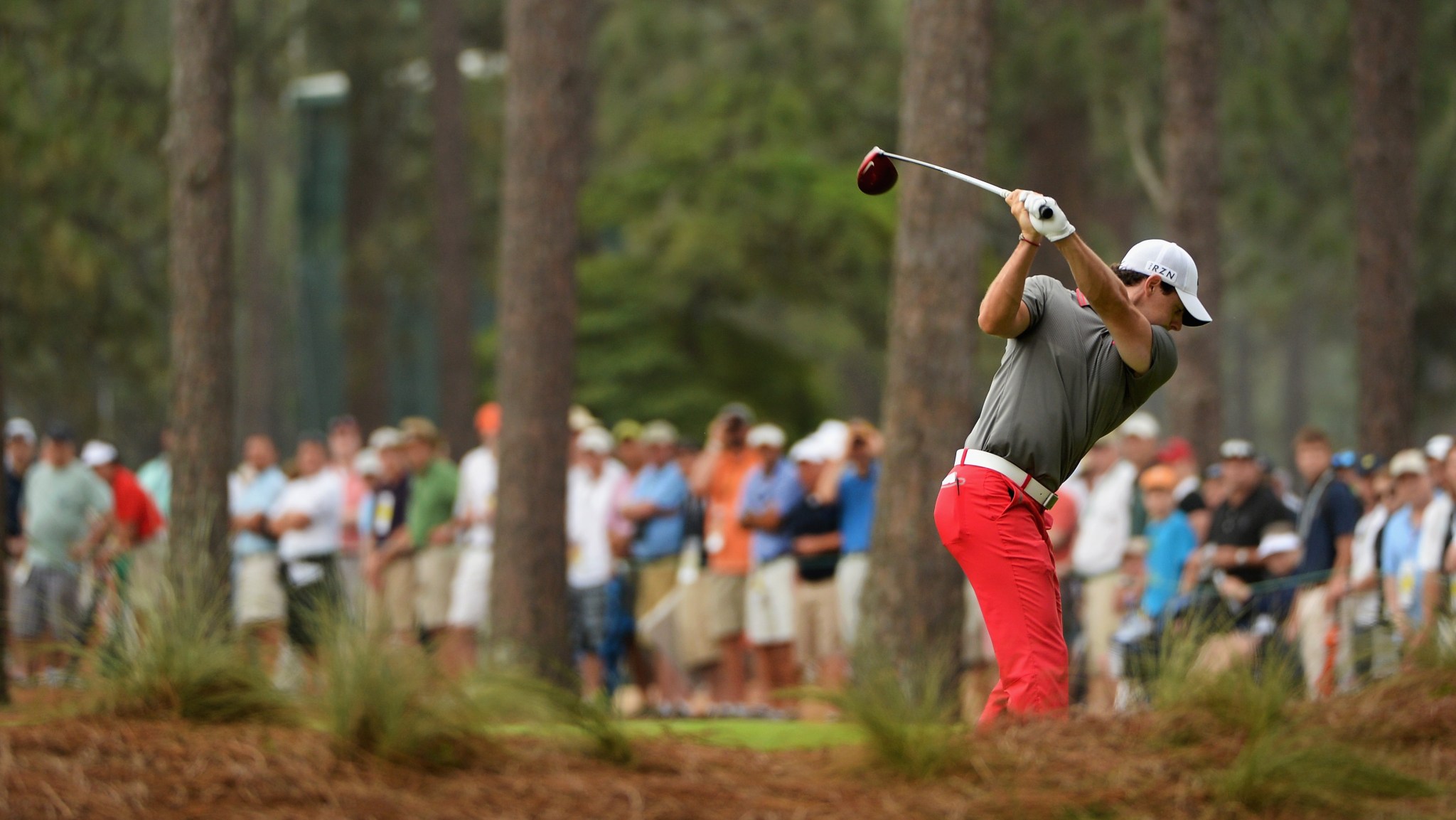 I just realized something: Unlike the other American majors, the U.S. Open lacks a sweet tagline. The Masters has “a tradition unlike any other,” and the PGA Championship is “glory’s last shot.” Both pretty cool, right? But our national title, which begins today, is slogan-less. So I’d like to invent one now: America’s Only Golf Tournament. Just pretend none of the others exist! It’s grandiose and solipsistic, just like America!

As I did with the Masters in April, I will now break with the stiff convention of golf writing and deliver unto you a hot dose of the unvarnished truth. Here are the 2014 U.S. Open Power Rankings, from 20 to 1, including sand, grass, icons, weather patterns, and other elements both animate and otherwise. Let’s begin!

Unlike at Augusta, I have to tip my cap to the sports media juggernaut for recognizing that Woods is not the only golfer on the planet. We learned recently that he wouldn’t be playing at Pinehurst because of his back injury (which people familiar with the injury actually knew all along), but it already seems as though his memory is fading. Instead, we’ve focused on Adam Scott and Phil Mickelson and Rory McIlroy and players who are actually playing. It’s remarkable. Are we seeing the beginning of the end of the Woods era, and the beginning of golf scrambling to find a new identity after years on the Tiger train? God, I hope so.

In a move that I think is completely awesome, the powers-that-be at Pinehurst decided to give Ben Crenshaw and Bill Coore open license to “restore” the course. They decided to revert to the natural geography of the North Carolina Sandhills — contours, plant life, arid soil — rather than pumping in wasteful gallons of water to make it look like a bright-green parkland course you’d find in Florida. It’s part of a larger conservation movement sweeping golf, which is terrific, but I mostly love that Pinehurst is “homegrown” again (they even used archival photos from the ’30s and ’40s as a guide). What this means is that the fairways are yellow and brown in spots, the “rough” isn’t rough at all, but simple waste area — hard sand, basically — and the rough gives way to the eponymous pine trees and the thick straw at their base. It’s American woodlands mixed with European links, and it’s fantastic.

Normally, the pros would love playing out of the waste area instead of the gnarly rough that comes standard at U.S. Opens, but in an effort to go native, Pinehurst introduces one more element to spoil the good time.

As part of the throwback movement, Pinehurst transplanted more than 200,000 clumps of aristida stricta from Jackson Springs to the waste areas at the no. 2 course. With their addition, shots that leave the fairway can now be on the waste sand (relatively OK), pine straw (not great, but not horrible), or in a clump of wiregrass (totally fucked). It introduces an element of luck and risk/reward that is going to make this tournament so much fun.

It’s out in full force as the man who has finished second at the U.S. Open a record six times attempts to finally win one and capture the career Grand Slam. We’ve had stories about his wife, stories noting how quickly the insider trading accusations were forgotten, and even a sexy New York Times feature. Mickelson’s closest call came at this very course in 1999, but he lost to Payne Stewart on the 18th hole.

It sounds vaguely like some kind of new dance move you only see in EDM dance clubs in Belgium, but this is actually the name of the Pinehurst “mascot.” Here’s a picture of the icon in his trademark floppy hat. Also known as “golf lad,” the statue was created in 1912 based on a Pinehurst golf advertisement from the 1800s, and his stance was modeled on course architect Donald Ross. (Rumors that Putter Boy comes alive at night to murder you and your family are purely speculative at this point.)

The “open” part of the U.S. Open is taken very seriously, and this year, 24 golfers took the Tin Cup underdog route of qualifying at local and sectional events, from which the best pros are exempt. Last year that number was 20, and none of them made the cut at Merion. Only two players (Ken Venturi in ’64 and Orville Moody in ’69) have ever won after coming through both qualifiers. Still, the possibility exists, and that’s awesome.

His memory is all over this place. Less than six months after beating Mickelson for the 1999 title at Pinehurst, he died in a plane crash. There’s a statue of him outside the clubhouse in his famous fist-pump pose captured after the putt that clinched the title. Several photographic traditions have sprung up around the statue, including the one where you copy his pose, pretend like he’s just punched you (I think I may have invented this one), or use him to advertise Ohio State.

It is so, so hot here. It’s no mistake that places like North Carolina, Arizona, and Texas host PGA events in the January-May part of the calendar, while late June-August moves northeast. Pinehurst is the oddball this year, and we’re paying for it. Only the rain can break the hot spell and soften the course a bit. The winner of this age-old battle will have a huge influence on the tournament.

The United States Golf Association runs the U.S. Open (as well as the women’s Open and the U.S. junior and amateur events), and it’s an open secret that it LOVES toughening up courses so the winner finishes around even par. This is why Pinehurst no. 2 has only two par-5s despite having four under ordinary conditions. Suddenly, with the aid of reclassifying holes and pushing tee boxes as far back as they’ll go, there are four par-4s over 500 yards, and the par-3 lengths are as follows: 219, 191, 202, 205. Holy. Shit. Add in the weird rough conditions, that the course has been baking under the sun, and the certainty that the USGA will throw in some ridiculous pin placements, and any golfer who shoots better than par for 72 holes deserves a medal.

Sweet hell, there are so many cops in and around Pinehurst. I got stopped for going 82 in a 70 on the way down (come on, right?) and was thrilled when the nice officer told me I was getting a warning. I prepared to drive off, but then he went back to his car and actually printed out a warning. Doesn’t “warning” mean that you get off scot-free? What am I supposed to do with this thing? Anyway, as my friend Jon McCarthy of the Toronto Sun put it Tuesday, “To put it kindly, I’ve never felt so safe.”

OK, on to the players who can win this thing. As usual, I warn you that I’m biased toward the younger ones, and only three of my 10 Masters picks even made the cut (though I did nail nos. 1 and 2).

He’s capable of playing great golf (obviously), and we’ve seen it recently in his win at the BMW PGA Championship and a round of 63 at the Memorial, but he’s also capable of imploding (see his 78 the next day), and an imploding tendency won’t play well at Pinehurst.

The mysterious Frenchman burst onto the scene by outdueling Tiger Woods in Turkey and nearly stunning everyone at the Match Play in February. He hates media, is kinda moody, and is becoming one of the great young talents in the game. Wiregrass probably won’t scare him after his incredible performance in (and I mean literally in) the desert.

The story — he exorcises his Pinehurst and U.S. Open ghosts at the same time and completes a career Slam — is way too good to be true, and I don’t think for a second he’ll actually win. But he’s in good form, and he’s Phil FIGJAM Mickelson … of course he’s on the list.

He’s preternaturally gifted in the Bubba Watson/Dustin Johnson mold (neither of whom make this list because the “bomber” style doesn’t fit well at Pinehurst), but he’s smart and accurate too. The fight for him will be controlling his emotions and staying patient at a course that can easily get in your head.

You rarely hear about the Scot because he mostly plays in Europe and hasn’t fared well in most of his U.S. events. But he won at Dubai in February, played great at a tough U.S. course in Doral, and has two top-fives in the past month at big European events. If you’re in a fantasy pool, this guy should be your sleeper.

He’s the perfect golfer for this course — smart, clinical, accurate, patient. On the other hand, there are legitimate questions about his pressure play. Can he finally finish off a major after five top 10s?

The Bay Hill winner missed a few cuts as he was adjusting his swing with the security of the two-year winner’s exemption, and he came roaring back to notch a tie for third in Memphis last week. I’ve got a great feeling about him this week, and he’s my official dark horse.

There have been two HUGE tournaments so far this year, and Spieth found himself in the last group at both (Masters and Players). He couldn’t close at either, meaning he hasn’t quite figured out Sunday pressure yet.

This is one of the guys who beat Spieth, at the Players. He’s reconfigured his swing and seems to be in form that surpasses even his dominant stretch in 2010-11, when he became the no. 1 player in the world. At a course that skews European, I love him here.

He’s the no. 1 golfer in the world, coming off a dramatic playoff win at the Colonial against Jason Dufner. Best player + top form = great pick + you’re welcome ÷ formulas are obnoxious + I’m in too deep to stop now.