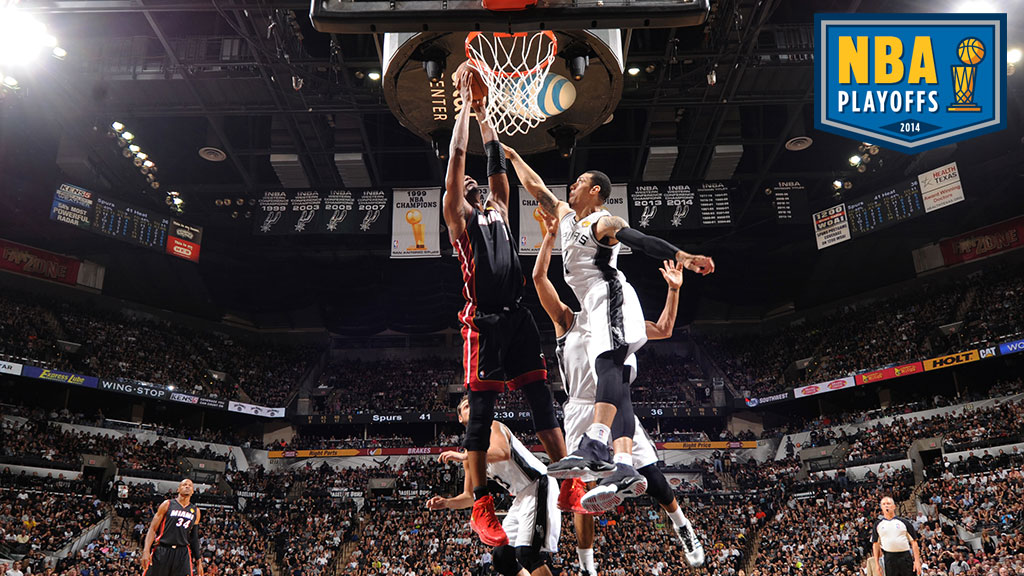 There are lots of role players who are in the league because they are really good at one discrete thing. Many of them are spot-up shooters — Steve Kerr and Steve Novak types. Kendrick Perkins sets wonderful screens in between traveling and dropping the ball. Reggie Evans destroys the offensive glass, which he should, since he’s a great rebounder and nobody guards him.

But most of those little things manifest themselves dozens of times in each game. Even a spot-up guy who jacks only three or four shots can influence every possession by bending the defense an extra step toward him. Evans might nab 15 rebounds. Perkins could set two dozen scowling picks for Oklahoma City’s stars.

Danny Green is more than a role player some nights, including in San Antonio’s ridiculous Game 3 win, when he shot 7-of-8 and attacked off the dribble more than usual. He’s a good defender capable of hitting contested 3s, especially in transition, when he likes to pull up even with a defender in his face.

On these Spurs, he’s still mostly a role player, the fifth option in San Antonio’s starting lineup — an elite spot-up guy whose dribble drives can veer into dicey territory. He is a perfectly average NBA wing starter.

Except Green is randomly sensational at one skill-within-a-skill: working as the last line of defense in transition. He is plain old Danny Green 99 percent of the time, but on maybe 50 plays per season, he turns into LeBron James.

In fact, it was his work against LeBron in transition during last year’s Finals that alerted the world to Green’s secret superpower:

And it has just kept on happening since. Green is uncannily good at anticipating an opponent’s plan, playing the angles, and leaping into the way of a potential layup without committing a foul. He doesn’t jump up as much as he jumps backward and sideways at once, flying by at just the right moment without making any contact.

Oh, hey, is Russell Westbrook screaming toward the rim on one of his unstoppable attacks? No problem, Green is there!

Crap! Kevin Durant, so long it seems like he can touch the rim from 30 feet away, is gliding in for a fast-break score? CALL DANNY GREEN.

Green got Norris Cole in Game 3, appearing from behind, out of Cole’s line of sight, to swat away Cole’s shot away before it even reached the backboard. Green rejected the shot with his arm fully extended, so that his body, chest to legs, was as far from Cole’s as possible.

“Well, I know I’m at least not bad at it,” Green told me this week, laughing when I suggested he might be the LeBron of transition defense. “I just know I gotta do whatever it takes to not give up two easy points. Because I know if I don’t, Pop — my coach — is going to be upset.”

That’s a perfect way to put it, actually. Green credits part of his success as a last line of defense to going against the NBA grain. A lot of defenders in that situation panic and do one of three things: give up; go for a wild shot block; or take a foul by wrapping up the offensive player.

Heat players, true to form, would not give Green any public credit for his anti-fast-break destruction. “He’s just making plays,” the normally gregarious Cole says when I bring up the shot-block from Game 3. “It’s the Finals. You have to make plays.”

Even Shane Battier, the league’s resident philosopher, demurred. “I take pride in being a great transition defender,” he says. “And I would never notice anybody else.”

Members of the organization privately acknowledge they have taken note of Green’s work in transition after 10 Finals games over the last two seasons. The Spurs have regularly given up fewer fast-break points with Green on the floor over the past three seasons, per NBA.com. The reliability of that stat is unclear; Green is a starter, which means he plays a lot of minutes with San Antonio’s two best defenders in Tim Duncan and Kawhi Leonard.

The Spurs are also regularly one of the league’s best teams at preventing fast-break points. They are cautious in crashing the offensive glass, preferring to have at least two or three guys retreat toward midcourt when a San Antonio shot goes up. Miami is averaging just 12 fast-break points per game and 13 points off San Antonio turnovers so far in the Finals, per NBA.com. The Heat averaged 13.2 fast-break points and 19.3 points off turnovers in the regular season, and they are vicious in punishing turnovers with demoralizing transition dunks and 3-pointers.

The Spurs have dulled that Miami weapon despite turning the ball over at a higher rate than normal.

Isolating Green’s impact within this disciplined environment is tough. We’re still early in the SportVU player-tracking revolution, but forays into studying 2-on-1 and 1-on-1 chances indeed rank Green among the league’s best in these desperate situations. He adheres to the Spurs’ impeccable floor-balance principles on offense. If he starts a play in the deep corner and notices another Spurs perimeter player driving under the rim, Green will rotate up toward the top of the arc — a subtle rotation that ensures San Antonio will always have the same number of perimeter players high on the floor in case of a turnover or quick outlet pass.

He rarely admires his own shot, a bad habit that allows an opponent to leak out. He grabbed only 25 offensive rebounds all season, posting one of the lowest offensive rebounding rates among all rotation players. If any San Antonio perimeter guy has some extra leeway in seeking second-chance points, it’s Leonard. Green knows his job is to get back, and he’ll chase offensive boards only in very specific situations. If he’s in one corner and sees the Spurs have three other players behind the arc, Green might try to sneak in for an offensive rebound. But other than that, it’s retreat, retreat, retreat.

Green says foul avoidance carries another benefit. Scorers anticipating a foul tend to downshift, making it easier for Green to read their steps and swipe at the ball. “They slow down a bit,” Green says. “And they bring the ball kinda close to your face if you’re in front of them. Sometimes you can get a piece of it. I’ll try to block the shot, or at least alter it. Sometimes they miss, and sometimes they don’t.”

He also watches a ton of film on opposing players, zeroing in on their tendencies during fast breaks. He knows, for instance, that Westbrook prefers going left against token transition pressure, and so he shaded Westbrook that way during the play above from the conference finals.

Directing Westbrook to his preferred side would appear dangerous, but it allowed Green to guess with more confidence. “It’s about knowing tendencies and mannerisms,” Green says. He’s tried to learn the timing of Dwyane Wade’s transition Euro-step in preparation for this series.

Straight 2-on-1s are obviously tougher. They require some quick math and painful choices: OK, who has the ball, and how dangerous is he? What’s his dribbling path? Who is his running mate? Can that guy shoot 3s? Catch alley-oops? Which player is a more urgent concern?

Green is great at “stunting” — the art of faking toward one player in a 2-on-1 and then darting over to the other. The goal is to confuse the first player into pausing or passing, and to slide into the passing lane as that player makes his fatal choice. It allows Green to hover between both players, serving as a double deterrent and sowing the kind of confusion that can buy time for his teammates to get back.

It doesn’t always work. Green was on the wrong end of Ray Allen’s monster dunk in Game 1, a 2-on-2 situation that became a 2-on-1 when Allen dismissed Marco Belinelli with an elbow.

“I thought Belly had my help,” Green recalls. When Belinelli went down, Green found himself in the center of an Allen-LeBron fast break. It doesn’t take a genius to designate LeBron the more dangerous threat. As Green backpedaled, he tried to stay between James and Allen, hoping to prevent an easy pass to LeBron and perhaps confound Allen into pulling the ball out. He didn’t commit whole hog to either player. He just dared Allen to make a play on his own, and positioned himself to steal any pass if Allen deferred to James.

Allen responded with an emphatic slam. “Sometimes it doesn’t work,” Green laughs, recalling the play. “I kinda wanted Ray to make a play, and he did. If my choice is between LeBron and Ray, I gotta make Ray make a play. And he did. Sometimes it goes that way.”

But it goes Green’s way more than it does for most defenders. In a series this close between two elite teams, every little thing matters.