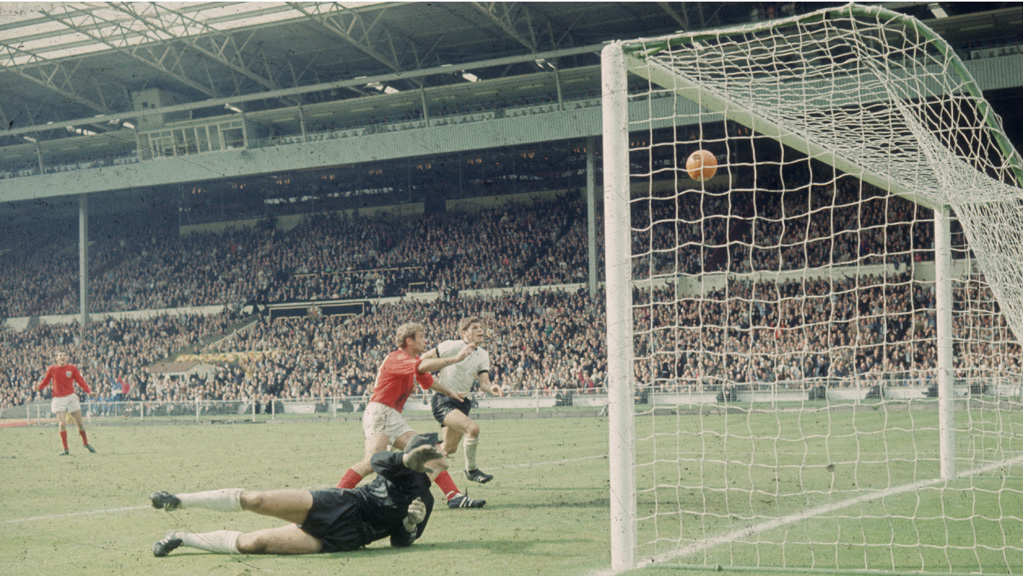 Every so often there is a strange moment in soccer in which no one can tell if the ball has crossed the goal line or not. Everyone looks at the referee. The referee looks at his assistant. The players swarm both officials, gesticulating wildly, shouting in who knows how many languages. Thousands are arguing in the stands. Millions are yelling at their televisions. In this moment, fans experience ecstasy and anguish at once, unsure of which emotion will take over. And then the ref decides. Most of the time he’s right.

But sometimes he’s wrong. Those errors — when a goal is awarded though the ball never crossed the line, or, inversely, when it does cross the line unseen by the officials — are called “ghost goals.” Chelsea manager Jose Mourinho is credited with coining the term, but ghost goals have been part of the game as long as people have been playing soccer. Ghost goals are rich in drama — fans ask what could have been, what should have been, and how their teams’ fates would have changed if the call had gone the other way.

But this year, for the first time, there will be no ghost goals at the World Cup. That’s because FIFA has required the installation of goal-line technology at every field where World Cup games will be played in Brazil. Each pitch will have 14 high-res cameras that triangulate the precise location of the ball, alerting the referee when it crosses the goal line. This is accurate and reliable, and it won’t impede the fluidity of the game. In some ways it feels like a natural step forward for the sport — just part of embracing the technology available today.

But the quest for inarguable fairness will eliminate ghost goals, and fans will lose the sense that luck and fate are a part of winning (or losing) the World Cup. Those moments that sparked so much debate and controversy and pain and joy won’t happen anymore. This is a survey of the most memorable such moments in soccer history. It’s a eulogy for the ghost goal.

Eleven minutes into extra time, with the score knotted at two in the World Cup final, England forward Geoff Hurst shot from 10 yards out. The ball ricocheted straight down off the crossbar and bounced on — or across — the line. The referee couldn’t make the call. Wembley Stadium swelled with a clamor of agonized confusion as the ref ran to his assistant, Tofiq Bahramov, an Azerbaijani lineman whose grave has since become a pilgrimage site for English football fans. The linesman declared it a goal; England went on to win, 4-2. The country hoisted its first and only Jules Rimet Trophy in London. It was the stuff of dreams.

It turns out the call was wrong. A team of Oxford University researchers studied video of the goal and concluded that the ball was at least 6 centimeters from crossing the line. The goal that gave England its greatest sporting triumph shouldn’t have counted. Germans have a word for these kinds of “goals”: Wembley-Tor.

In the final minutes of a scoreless tie at Old Trafford, Tottenham’s Pedro Mendes lofted an audacious 50-yard lob toward Roy Carroll, United’s goalkeeper. Carroll backtracked into position and tried to collect it with his chest, but the ball slipped loose, bouncing a yard over the goal line before he could scoop it away. Unlike 1966, this was obviously a goal; everyone saw it. Everyone except referee Mark Clattenburg. He waved it off and the game carried on. Each replay — from different angles, in different speeds — compounded the sense of injustice and magnified the mistake. The announcers shouted themselves raw in protest, as did the players on the field; bewilderment was the only reasonable response.

A few months later, another bad call added to the controversy. Led by Mourinho and rich with Russian petrodollars, Chelsea had marauded through the Premier League that season, beating Liverpool twice en route to the title. The first leg of the Champions League semifinal ended in a scoreless tie. But four minutes into the return leg at Anfield, the deadlock was broken. Liverpool’s Milan Baros chipped the ball over an onrushing Petr Cech before getting waylaid. The ball bounced perilously in the box before Luis Garcia swept in and knocked it on toward the goal. Then, Chelsea defender William Gallas appeared to clear it off the line just before the touch became a goal.

But ref Ľubos Micheľ called it a goal. It ended up being decisive, earning Liverpool a berth to the final in Istanbul, where they claimed their fifth European Cup in one of the most thrilling, dramatic matches in the sport’s history.

With England trailing by a goal just before halftime, Frank Lampard struck from outside the box. It hit the underside of the crossbar, just as in 1966, but this time it bounced several feet within the goal. Referee Jorge Larrionda and his assistants inexplicably missed it. The game carried on, and England, deflated and aggrieved, was trounced 4-1.

The mistake was so egregious that it basically forged an instant consensus among players, managers, and fans that goal-line technology was a necessity. Even FIFA president Sepp Blatter — usually a reliable bulwark against change, no matter how reasonable — agreed. At the 2012 FIFA Club World Cup in Japan, two different goal-line tracking systems were used. One of them, Hawk-Eye, was adopted by the English Premier League and was used this past season. FIFA agreed to implement a system called GoalControl-4D at this year’s World Cup.

The first goal to be awarded using goal-line technology was a scuffed shot by Manchester City striker Edin Dzeko. It wasn’t clear whether the ball crossed the line before it was cleared out of the air. Everyone held their breath, but only for a brief moment, until referee Neil Swarbrick’s wristwatch buzzed to tell him that Dzeko’s shot was definitely a goal. There was nothing to debate. This was the right call.

There’s a question fans of any sport ought to ask themselves: How much are we willing to sacrifice — in terms of tempo, rules, and spirit of the game — to make sure every call is right? After all, if a stadium has high-speed cameras, why not use them to make indisputable offside calls? What about penalty-box incidents? Could cameras even end diving, the scourge of professional soccer?

But then again, if the referees’ imprecise judgment can be equally unfair for everyone, doesn’t that make it fair? England lifted the World Cup with the help of a bad call, and decades later a bad call helped eliminate them. The Germans suffered in 1966, but they benefited in 2010. Sports fate creates its own version of parity, and fans have always sensed it. Why else would so many people talk about the soccer or basketball gods?

Red cards wrongly administered. Goals disallowed for bad offside calls. Penalties that should have been awarded but weren’t. Soccer seems to allow more opportunities for the intervention of bitter fate and dumb luck than perhaps any other sport. Ghost goals are true to the spirit of the game. But now, at least in the game’s most prestigious international competition, they’re gone. Instead, we’ll know with certainty whether a goal is a goal. What a pity.

Joseph Neighbor is a writer from Florida. He lives in Brooklyn.